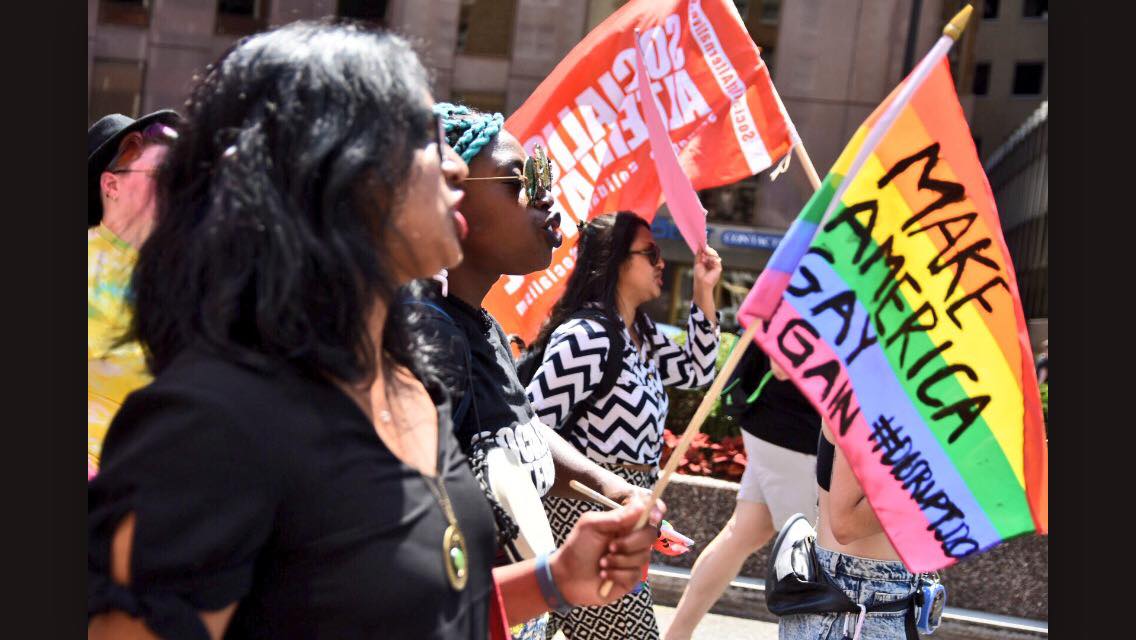 Beginning in 1975 with a defiant block party at which Washington D.C.’s queer community courageously broke out of the closet, the city has since hosted an ever-growing collection of Pride events, known as “Capital Pride.” Recent celebrations, however, are a far cry from those grassroots origins. Capital Pride 2017, organized by the Capital Pride Alliance, was sponsored by large banks such as Wells Fargo and Capital One, defense contractor Lockheed Martin, Marriott International, large retailers, and other Wall Street behemoths. Perhaps Capital Pride ought to be more aptly named “Capitalist Pride,” as it has increasingly aligned itself with corporate interests, lost its fighting political character, and ignored concerns of Queer and Trans communities in the District. The Human Rights Campaign, part of the Capital Pride Alliance, has given Wells Fargo, a funder of the DAPL and profiteer of the private prison racket, a 100% A+ rating on its Corporate Equality Index, a listing of organizations/businesses that are supposedly LGBTQ-friendly.

Many of these big corporations have funded Pride celebrations around the country while using them to “pinkwash” their images, dilute the radical nature of Pride with its origins in the Stonewall rebellion, while reinforcing the structural violence against the most oppressed of our communities: the poor, people of color, trans individuals, and the incarcerated. In other cities this year, like in Los Angeles, commercialized Pride events are being supplanted by inspiring politicized protests, in particular to stand up against the Trump administration’s brutal attacks on LGBTQ rights.

For these reasons, activists in D.C. came together under the banner of “No Justice No Pride” (NJNP) to demand that Capital Pride make systemic changes which would give the power of Pride back to rank-and-file queer workers and communities. After a breakdown in community meetings with Capital Pride, NJNP held a weekend of action, in which Socialist Alternative participated in full solidarity.

On Friday, June 9, the night before the Capital Pride parade, NJNP decided to march through the most affluent gay communities to celebrate a radical queer identity, and to advertise the following day’s events. Socialist Alternative members from the D.C./Maryland/Virginia (DMV) area as well as New York City gathered at Logan Circle along with other marchers around 8 PM, when a crowd of about 200 people started marching up 14th Street. The marchers chanted anti-corporate slogans, chants directed at the commercialization of Capital Pride, and “no justice, no pride!”

Four blocks away, we joined a picket at Matchbox that was organized by Restaurant Opportunities Center (ROC) and Many Languages One Voice (MLOV). Matchbox is a local restaurant that has been sharply criticized by the community for unjust firings of its workers for demanding better working conditions, such as timely water breaks. Folks have been picketing there for the past few weeks, demanding workers’ concerns be addressed, with some picketers going in, ordering water, and tipping the wait-staff so they don’t lose wages. That night, 14th & T Streets were much more than an intersection of roadways. They were also an intersection of struggle and solidarity, with the LGBTQ community supporting local immigrant workers, chanting “no justice, no pizza” and “up with the revolution, down with corporations.”

After leaving the picket, we marched over to Dupont Circle, where everyone gathered for a rally. Organizers spoke about why we need a left alternative to Capital Pride, and rallied the march-goers for the next day’s actions. The night’s activities ended around 9:30 PM.

Socialist Alternative DMV, accompanied by New York City Socialist Alternative members, joined the family-friendly march organized by NJNP on the day of Capital Pride parade. A group of about a hundred or so marched from McPherson Square to Dupont Circle where Capital Pride-goers had gathered. Here, we talked to a handful of curious onlookers about the importance of resisting corporate pride and of building a grassroots queer movement to stand up against Trump’s attacks on LGBTQ rights. The march then continued along the route of the Pride parade, rallying hundreds more. The march ended back in Dupont Circle shortly before the actual Capital Pride parade began.

The direct action did not end there, however. Activists from the No Justice No Pride collective blocked the parade route at three points: the Wells Fargo float, the Metro PD float, and Lockheed Martin’s float. This forced Pride officials and police to redirect the parade. The disruption allowed NJNP to read out a short list of demands, including barring corporate entities that inflict harm on historically marginalized LGBTQ people from participation in Pride events, preventing law enforcement from marching in the parade, and scaling back police presence at Pride.

Where do we go from here?

The NNJP solidarity actions helped re-politicize Pride, and have received much attention in the media. But this is not enough, and we must unite our struggles going forward to win major gains against some of the very serious threats to the LGBTQ community and the working class as a whole. Perhaps the most urgent of those threats is the risk of losing healthcare with the introduction of some version of Trumpcare.  LGBTQ individuals will be hit especially hard with regard to higher proportion of the community relying on Medicaid, needing access to counseling, reproductive, and trans-related services. Using the energy from the anti-corporate Pride protests, we will continue to organize through the summer to build a powerful local movement for single-payer healthcare and to fight the dangerous anti-LGBTQ legislation.

In our national and international movements for a democratic and equal society we must not lose sight of the most vulnerable of us. We must join our struggles in the fight for liberation of workers and all oppressed people. However, we cannot have liberation of any sort with the claws of corporations stuck in our backs. Commercialized Pride events are but one manifestation of a system that can both profit from violence and put on a facade of social progressiveness. By building our own independent movements, we can challenge the corporate domination of society, and we as Socialist Alternative will continue raising our platform and our banner on the streets where true working class power will be awoken.