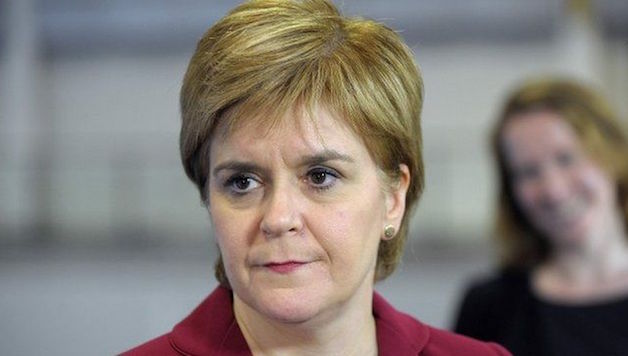 May Must Go! – Build mass struggle to drive out the Tories

Theresa May and her hated Tories suffered an utter humiliation in Thursday’s general election. May called the election seeking a hugely increased mandate and ended up crawling back into No. 10 with no majority at all having lost 19 seats. Her government will be propped up by the reactionary, pro-austerity Democratic Unionists from Northern Ireland. May has described the DUP as “her friends”. But this is a party that opposes equality rights and a woman’s right to choose. In reality, it will be a government wracked by crisis and division and will fall. “Strong and Stable” is a distant memory. “Torn into Tatters” a more appropriate description. May’s party will also likely split asunder over Brexit as their division tear them to pieces.

Her attempt to cobble together a new “stable” government will fail. The trade unions, Corbyn and the millions who backed him must now go on the offensive to bring this government down and defeat its austerity agenda. Jeremy and the trade union leaders in particular should call for mass action, including demonstrations and strikes over cuts, pay and in defence of public services like the NHS. The TUC should call a mass demo now. Under mass pressure May could be forced to call a new election. Such is the instability and lack of a base of support for the Tory government and its policies, a second general election is very possible in 2017.

Millions of working class and young people took the opportunity to hit back at a decade of austerity and growing inequality to torpedo the Tories and the establishments hoped for a 100 seat-plus Tory majority. As Socialist Party Scotland commented six weeks ago; “We support many of Jeremy Corbyn’s policies and if they built on to form a clear unambiguous anti-austerity manifesto, he could defeat May.” It was the existence of a clear left and anti-austerity manifesto from Jeremy Corbyn that electrified the election. From being 20% behind the Tories at the start of the campaign, Labour and specifically Corbyn’s platform won a stunning 12.8 million votes and 40% share. This was a bigger popular vote than for Ed Miliband in 2015, Gordon Brown in 2010 and Tony Blair in 2005 and 2001. And the biggest vote increase for a party since the 1945 Labour landslide.

Huge support for Corbyn’s core polices of £10 an hour minimum wage, public ownership of the railways, taxing the rich and the corporations and an end to austerity, free tuition for students in England and more inspired millions to vote. The billionaire-owned media and the BBC were mobilised to defend capitalist interests but failed to stop the surge to Corbyn and his left wing manifesto that contained many policies socialists support.

Young people, especially in England, voted in unprecedented numbers in this election, defying conventional wisdom that the young are “disinterested” or “apathetic”. What they needed was something to vote for. Corbyn also mobilised hundreds of thousands to rallies across Britain, moving even Michael Crick of Channel 4 news to tweet; “He has probably addressed bigger meetings in 2017 than any leader since Churchill.”

No one was more shocked by the surge to Labour than the right wing Blairites who have actively attacked and attempted to sabotage Corbyn since his election to the Labour leadership in 2015. Many of them refused point blank to have any reference to Corbyn in their election material. In Scotland, Blairites Kezia Dugdale and Ian Murray did not even show up at Corbyn’s rally in Glasgow.

The biggest losers in this election, aside from Theresa May, were the Scottish National Party (SNP). In a stunning contrast to the 2015 landslide when Nicola Sturgeon’s party won 56 of the 59 available seats, the SNP lost 21 seats and half a million votes. Paying the price for failing to deliver on their anti-austerity rhetoric and facing huge polarisation on the national question, their vote fell from 50% in 2015 to 37% this time. Former SNP leader Alex Salmond lost his seat as did their deputy leader Angus Robertson, both to the Tories. In all, the SNP lost twelve seats to the Tories, three to the Lib Dems and six to Labour.

Again, as followed the Tory gains in the council elections in May this year, there has been much comment about the Tory revival in Scotland. It’s true that the Tory vote share in Scotland increased from 15% to just under 29%. Their seat gains, however, were in areas like north-east Scotland, Perthshire, Stirling and the Borders etc., which were traditional Tory areas up until 1997. In the main these are rural, more affluent and conservative areas where the Tories and the SNP have battled it out for decades.

Ruth Davidson’s Scottish Conservative and Unionist Party had one policy in the campaign, “no to a second independence referendum”. They have successfully captured a significant part of the anti-independence bloc by portraying themselves as the most effective vehicle to protest against the SNP’s call for a second referendum.

Yet again, Scottish Labour and its Blairite, anti-Corbyn leadership also attempted to make opposition to independence their main policy platform and, as a result, failed to make the recovery that was possible. Nevertheless, there were significant swings to Labour in working class areas in Glasgow and across the West of Scotland where Corbyn’s left and anti-austerity message had its greatest impact. Indeed at the start of the campaign six weeks ago, Labour were on 18% in the polls in Scotland and ended up with 27%

Indeed had Scottish Labour modified their disastrous opposition to independence and campaigned on Corbyn’s anti-austerity platform, Labour could have doubled their numbers from Scotland. For example Labour failed to defeat the SNP by only 74 votes in Glasgow East and by 60 votes in Glasgow South West. The modest increase in seats from one MP to seven and a 3% increase compared to their wipeout in 2015 could have been much greater.

Socialist Party Scotland campaigned in support of Corbyn’s manifesto. Although we pointed consistently to the need to adopt a far more sensitive approach on the national question. As a minimum to defend the right of the Scottish people to self determination and to accept the right to a second independence referendum when there was a majority in favour of one. Corbyn and the Labour left could, as we do, defend the unity of the working class across Britain through a voluntary socialist confederation, while supporting an independent socialist Scotland. In addition we demanded that Labour councillors stop voting for cuts to jobs and services.

Despite the SNP’s setback, support for independence is still at historic highs of around 46%. This underlines the point that a large part of the SNP’s losses are down to their shift to the right and carrying out Tory austerity in Scotland rather than a dramatic drop in support for independence. However, the momentum towards a second referendum on independence has been checked by the scale of the SNP losses. At this stage, Nicola Sturgeon is unlikely to be keen to pursue indyref 2 unless and until there is a decisive change in the mood around the national question in Scotland.

Clear out the Blairites

A vital task now for Jeremy Corbyn is to proceed with the completion of the only partially finished revolution that is needed to transform Labour into a real left, socialist and anti-austerity party. The Blairites are licking their wounds. Many of them, ironically, have Corbyn to thank for still having their seats but Labour is still two parties in one. Corbyn and his supporters must use his enhanced mandate to ensure the complete democratisation of Labour, including the right to mandatory reselect MPs. An early general election seems inevitable as the weak and wobbly May provokes mass opposition to her polices and flounders over Brexit. Corbyn Labour could win an overall majority if they were able to fight without the sabotage of the Labour right. Jeremy must also call for an end to Labour councils carrying out cuts as part of the anti-austerity movement.

This general election campaign has introduced socialist ideas to a new generation. That is enormously positive. It has also given a glimpse, however, of how far the capitalists would go to try and sabotage any attempts to introduce policies in the interests of the many not the few. The hostility Jeremy Corbyn faces in opposition is only a pale shadow of how they would attempt to derail a Jeremy Corbyn led government.

To prevent this will pose the need for far-going socialist measures including nationalising the major corporations and banks that dominate Britain’s economy, in order to be able to introduce a democratic socialist plan. This would allow a socialist government to begin to manage the economy in a planned way under democratic workers’ control and management – that really would be “for the many, not the few.”

The general election has given more than a glimpse of the power of radical socialist policies and the potential to build mass support for them. The Tories have come out of the election in tatters. Now we need to build a movement to force them out of power. The 8 June was the beginning not the end. It was the beginning of a movement to get the Tories out and to create a socialist society that provides free education, decent housing and a well-paid job for all.