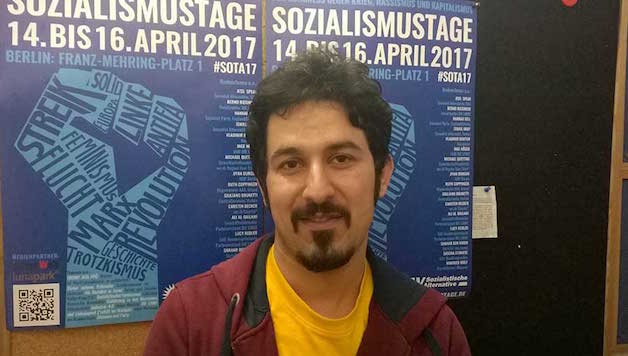 Peshraw Mohammed is a leading activist from the Socialist Review Centre in Iraqi-Kurdistan, and is currently a refugee in Germany. Sascha Staničić from the SAV spoke to him about the situation in Iraqi Kurdistan.

Western governments and the media like to portray the situation in the Kurdish autonomous region of Northern Iraq as one of freedom and democracy. You just had to flee the area being a socialist activist. What is the situation?

The Kurdish people in Iraq were brutally oppressed for decades by the regime of Saddam Hussein. In the aftermath of the US-led war against Iraq in 1991, the Kurdish region within Iraq seized autonomy which meant that the two pro-capitalist parties KDP and PUK took power. In elections in 1992 these two parties got almost all seats in parliament. The KDP is led by Massoud Barzani and the PUK by Jalal Talabani. They quickly developed conflicts over questions of where the money from tariffs at the borders to Iran and Turkey should go to, and a civil war started which lasted for three years. Under the leadership of Bill Clinton an agreement was reached in 1997 which gave the Suleimaniyah region to the PUK and Talabani and the rest of the area to Bazani and his KDP.

After the Iraq war of 2003, Talabani and Barzani created a new joint government with a power sharing of all positions. While Talabani became president of the Republic of Iraq and attempted to build his influence over the whole of Iraq, Barzani concentrated on getting fuller control over the oil fields and the education sector in the Kurdish region.

As a result the PUK is getting weaker with many internal tensions while the KDP is basically controlling the economy and tries to build a Dubai-style economy based on oil revenues. Barzani should have left power for constitutional reasons in 2013 but refused to do so. In 2015 he closed down the parliament. The situation is as such that the president of parliament, Yussuf Mohammed, who belongs to the small party “Change Movement“ has to stay in Suleimaniyah and cannot go to the capital Erbil because he is labelled an enemy of the KDP.

What about protests and demonstrations from below?

We have seen protests against the undemocratic character of the regime. For example in 2011 there were big demos starting on February 17th lasting for two months. In 2014 an economic crisis began which led to a deterioration of the social situation for workers. Many workers lost wages, in many cases they were halved and are often not paid. I myself as an employee at the university of Suleimaniyah in 2015 recieved only eight months of wages and only half the wage! Since then we have seen more demonstrations of workers, teachers, government employees from different sectors.

In Erbil demonstrations are completely forbidden these days. Ten days ago there was an attempt do demonstrate against the army offensive against the Yezidi people and all got arrested and jailed. Many journalists have recently been killed by government forces.

In Suleimaniyah there is a somewhat different situation and demonstrations can take place, but they are often attacked by the armed forces of the PUK and the Peshmerga – the latter fight both the so-called IS and its own people.

There is an enormous concentration of power in the hands of the Barzani family, with him being President and many relatives holding other central positions.

The Barzani regime is portrayed as an ally in the struggle against the so-called Islamic State (Daesh). Should it be supported in this regard?

Barzani is an ally of Erdogan in Turkey. They have a strategic contract with the Turkish army being inside of Iraqi-Kurdistan to support Barzani in his fight against the Yezidi people. Barzani also sold many licences for the exploitation of the oil fields to Turkish companies. Here after 2003 the workforce was very much changed. Today it mainly consists out of immigrant workers with maybe only 20 percent being still Kurdish workers.

It is a disgrace that the German government and some even on the left support the Peshmerga because they think the Peshmerga fight Daesh. When Daesh attacked the Yezidi people in the Sengal area, it was the YPG and the PKK fighters who went there to fight against Daesh. Since then the Yezidi people got organised into their own armed forces called Yezid Khan, which is linked to the YPG and took control over their own region. Barzani then built a new army called “Rojava Peshmerga“ which tries to start a civil war against the Yezidi people. They fight against the Yezidi people with German weapons, as was revealed by the SPIEGEL news magazine. This war really is a gift to Erdogan because of the strategic importance of the Sengal region.

Tell us something about the activities of your political group.

Two years ago demonstrations started in Suleimaniyah but they were without leadership and direction. Islamist and bourgeois forces tried to intervene and get control over it. Then in 2016, the IMF came to Kurdistan and organised some big panels and gave advice to the government to go for further privatisations. Now the electric sector, the higher education and the agricultural sector are supposed to be privatised. The government calls these elements of public ownership “socialist sectors of the economy”, and claims they are the reason for the economic problems.

We tried to intervene into that situation and organised seminars and gave TV interviews. Then we were attacked by the DP and the PUK. For example a seminar which I was supposed to give in Erbil was closed down by the police. In Suleimaniyah all our seminars and activities were forbidden and we could not participate in demos as the police stopped us personally.

At that time we had no political organisation, just a cultural and political centre of marxists, Socialist Centre Review. Now we try to build a new organisation, but we cannot work openly at the moment. I got the advice out of the security service to stop political activity or to leave the country.

The Socialist Centre Review publishes socialist books, for example classics including Trotsky, Luxemburg. We have been translating a lot into Kurdish, also marxist books close to our political aims from other trotskyist authors. Some of our books have been published in 2nd or 3rd edition, this means more than 1,000 books of them were sold – like the Communist Manifesto sold 3,000 copies and all Trotsky books have a print-run of between 1,000 and 3,000 copies. Practically we made many seminars for students and workers and participated in demonstrations, trying to build a leadership. Now, many work with us to build the new political organisation. We started a new website and magazine called Alternative. The1st edition of the magazine is planned for next month. Through members in exile we try to build links with socialist movements internationally like in Australia, Netherlands, Britain and Germany.

You are the first to translate Trotsky into Kurdish. Why Trotsky?

I read a lot about the history of marxism and the Russian Revolution and then came across Trotsky who had never been published in Kurdish. For me Trotsky gave an explanation on questions like what is the bureaucracy, why does socialism in one country not work, why did the Soviet Union collapse etc. But also for the tasks of socialists in the Middle East, Trotsky gives important answers and I could understand why the stalinist policies led to disaster, for example in the Iranian Revolution of 1979.

Through studying Trotsky I could understand that the tasks for the revolution is a combined one. We have capitalist countries in the Middle East now. But without basic democratic rights for the population. So we need to fight for democratic rghts and socialist revolution, both are linked. Especially the experience of 25 years of capitalist autonomy in the Kurdish region in Iraq shows that self-determination on a capitalist basis does not solve anything for the masses. We need socialist change and workers’ democracy and here again Trotsky gives ideas about how this could work. That is why I decided to translate Trotsky. I have personally translated five books of Trotsky so far and now I work on the “History of the Russian Revolution”, “Marxism in our time” and “Revolution Betrayed”.

After you came to Germany you started to work with Sozialistische Alternative, the CWI section in Germany.

After I came to Germany I made contact with comrades here from SAV, and had the opportunity to attend their conference and gave greetings there. This is a new experience for me. The CWI and the SAV are close to our ideas and political aims, and I hope we can work together as we have equal aims in socialism and international revolution. Hopefully socialists in Germany can create solidarity with us and our struggle for change in Kurdistan.

Iraq: A Tinder-Box Waiting to Burst into Flame