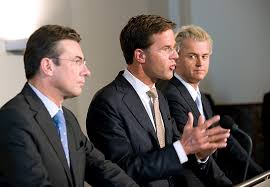 The most important feature of the national elections in the Netherlands is the colossal defeat for the outgoing austerity coalition government of the Liberal Party (VVD) and the Labour Party (PvdA). The Labour Party lost 29 seats and the VVD lost 8, an enormous total of 37 seats (more than half of the number of seats that are required to form a government – 75).The result is a clear indictment of the austerity policies of the past period. The VVD and the media will present the 33 seats as a “victory.” But the VVD lost seats and its coalition partner, the Labour Party, is reduced to a rump party of 9 seats. Neoliberalism has suffered a serious election defeat.

Another important feature is that although it came second, the extreme right wing Freedom Party (PVV), led by Geert Wilders, got stuck on 20 seats. Even with the strong winds of the asylum seekers crisis of 2016, Brexit and Trump’s victory in its sails, the PVV failed in its aim to become the largest party. It has more seats than in 2012, when it had supported the outgoing government, but in comparison with its high point in the polls (37 seats predicted in January 2016) the results were disappointing for Wilders.

Wilders poured out endless hateful racist tweets and remarks during the election campaign, including his shameful call for “less Moroccans” in the Netherlands. His campaign consisted of tweets and flying visits to a couple of cities. He did not try to organize a mass rally. More often than not there was more security people and press that PVV supporters around Wilders during his visits. His bluff was called in a debate with Liberal Party (VVD) leader, Rutte, when Wilders admitted that his demands for the policing of the ‘use’ of the Koran would never materialize.

The promised right wing spring has turned out to be a balloon with hot air. Apart from Wilders, a few small right wing parties got marginal results. But the lack of a big breakthrough by Wilders does not mean that the danger of the extreme right is over. Other parties adopted some of his clothing. An “ordinary” right wing party, Rutte’s Liberal (VVD) party, and an extreme right party, Wilders’ PVV, are now the two largest parties in the Netherlands. So the right wing threat remains.

The fact that Wilders, partly because of his lackluster campaign, got stuck at 20 seats means very little for the upcoming elections in France and Germany. There is no reason for the EU to congratulate itself with the Dutch elections results.

There are parties – Green Left, the Christian Democrats and the Liberal Party (D66) – that profited from the mass exit of voters from the Labour Party and the VVD. The Green Left (GL), now a liberal party with a green edge, has profited most, partly through the popularity of its new young leader. The GL’s vote jumped from 2% to 8.9% (its previous high point was 7.3% in 1998). In the past, the Green Lefts helped the last coalition government to win majority votes in parliament, for instance, regarding a Dutch military mission to Afghanistan. In this election, the Green Lefts put forward policies for improving the environment, closure of coal-fired power stations, ending tax breaks for corporations, ending ‘flexibility’ in firing procedures and calling for more money for higher education – demands that are popular among young people.

Green Left (GL) is based on the higher-educated people of West Holland – young professionals and intellectuals.  Although the former Communist Party was one of its co-founders, the GL does not put forward clear pro-working class policies let alone talk about socialism. Workers are not enthusiastic about GL. One of the reasons for this is the fact that GL has been part of the political establishment for years. The many Dutch workers who have experienced the downside of globalization and neoliberalism are concerned with the notion of “progress” under capitalism that GL espouses. Many workers fear that after being presented with the bill for bailing out the financial/banking sector, they will now face another bill for the “greening” of the economy if the GL is part of a new coalition government or influences its policies.

The Christian Democrats are a shadow of their former self – the powerful government party of the past. Its party leader plays the role of the upright conservative. But his proposals for the obligatory singing of the national anthem in schools, the taking away of the Queen’s passport (she is Argentinian by origin) and his statements about a “thousand years of gender equality” traditions in the Netherlands, have not left a deep impression. He also lacks a connection with the Catholic south.

The D66 is the most pro-EU party and they want to cut health care even more than the Liberals. The fact that the Green Lefts, the Christian Democrats and D66 won more votes can only by attributed to the collapse of the Labour Party and the losses of the Liberals.

The Dutch Socialist Party (SP) went down slightly, to just over 9%, and lost one seat. It failed to make any headway, despite years of austerity government. Instead of opting for the role as a fighting socialist opposition, the leadership presented the party as a “normal” opposition. The voters failed to see the difference between the SP and the many other opposition parties. As a ‘normal’ opposition party, the SP failed to make significant breakthroughs in previous elections, in 2010 and 2012. The potential of the party was clear in 2006, when it won over 16% of the vote and 25 seats, and in polls (in August 2012, the SP was predicted to win 37 seats). This potential still exists but to realize it the party needs to change course. A socialist program is the only way to get the SP out of its present stagnation, otherwise it will enter a phase of crisis.

In the coming period, a new government will have to be formed. That will take place under the leadership of the VVD (Liberal party), in spite of its loss of support. Although the election result is a big rejection of austerity, but the VVD is still in the lead.

The Liberal Party will try to continue austerity in government with new parties but it will be difficult to form a new coalition. More parties will be needed to form a coalition, this time. What direction will such a coalition take? Combine austerity with conservative Christian values? How can they avoid disappointing their voters? Will the coalition parties escape the fate of the Labour Party? All possible coalitions have the disadvantage of involving complicated compromises and a lack of direction. New elections are not excluded. But the VVD will be concerned it could lead to a comeback for Wilders, creating a new crisis.

The pressing problems facing the working class in the Netherlands – low wages, the lack of job security, poor working conditions and work pressures, high rents, high costs of health care, expensive and limited public transport, environmental problems, the high costs of education etc. – will not ease with the election outcome.

A study of European trade unions indicate that wages are growing less than before 2008 in 21 of the 28 EU countries. In a group of seven countries, among which Britain, Cyprus, and Greece, wages are considerably lower. The Netherlands is in the middle group of countries, where workers have not made any progress.

The trade unions in the Netherlands have been weakened, as this report also indicates. Sweden has the largest number of union members, but even there organised workers are in a minority (36%). The Netherlands are far below the average European level of union organisation. Against whatever government there may be, the rebuilding of the trade union movement is of the utmost importance for workers in order to be able to fight back. A militant approach of wage demands, shorter working hours, job security and better working conditions is the best way to rebuild the unions.

Workers in the Netherlands lack political representation. In spite of its stated intentions, the Socialist Party leadership failed in this respect. It is too eager to enter into coalition at local government level and makes little effort to mobilize against cuts. Either the SP continues on this disastrous path or it opts for a real future. A broad democratic workers’ party is needed, which combines defense of workers’ interests (higher wages, job security, stable pensions, retirement at 65, free health care etc.) with the struggle for a socialist society.

The continuation of poverty, rising health care costs, the threat of unemployment and loss of income, meager social security, discrimination and racism, the degradation of the environment; a new government of pro-capitalist parties is not going to end these pressing problems. None of the 77 parties that wanted to participate in the election, and none of the 28 that did so, is going to change the system. Dutch workers and youth will have to do that, organised in unions at work and in a broad political socialist alternative, locally and in government, linking up with worldwide protests against austerity, Trump and capitalism, in general.