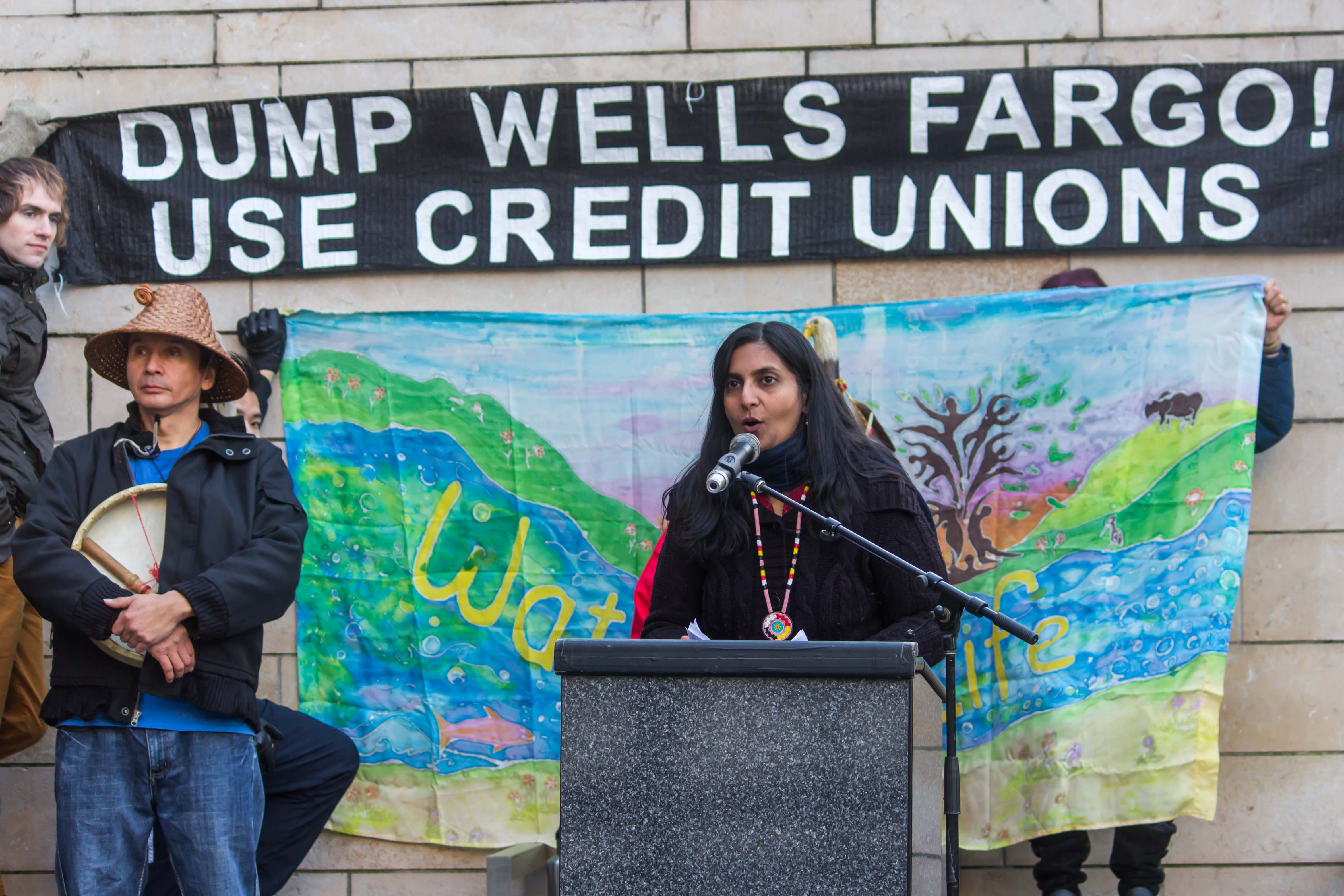 Today our movement won a major victory against Wells Fargo, Big Business, and the corrupt financial sector! First and foremost, I want to thank the Standing Rock Sioux, and those who joined them on the ground in North Dakota. I want to thank the #NoDAPL Seattle movement – Indigenous activists, 350 Seattle and a multitude of others. I also want to thank Shaun King and the Injustice Boycott movement for giving our local movement an extra boost.

The latest report from OXFAM found that the richest eight people in the world have as much wealth as the bottom half – 3.5 billion people – combined. And that wealth buys the power to write laws that benefit their rule and no one else. In 2008, in the wake of a financial crisis that cost millions of people their homes, our federal government, first under George W. Bush, then Obama, used our tax money to bail out the banks and their executives, instead of ordinary working people.

The Council bill passed today makes it clear that when Seattle’s contract with Wells Fargo expires in 2018, we do not intend to renew their contract. It will change the City’s contracting policies so the next time we find a bank, or any other type of company to do business with, social justice concerns will be considered as a significant factor.

Wells Fargo’s long history of deception and scapegoating does not, in any way, reflect the values of this city. Wells Fargo defrauded two million of their customers with subprime mortgages, disproportionately elderly people and people of color. And, when regulators found them guilty of this, they scapegoated regular tellers rather than executives – as if random bank tellers around the country just happened to all have this idea at the same time!

Wells Fargo is also one of the six primary financiers of the for-profit private prison industry, which has fueled the unprecedented mass incarceration of people of color and the poor. The University of California announced yesterday that it will terminate $475 million worth of contracts with Wells Fargo after repeated criticism from the Afrikan Black Coalition over its ties to private correctional facilities.

And, of course, Wells Fargo is one of the main banks financing the Dakota Access Pipeline (DAPL), an issue that has rallied millions of people around the country to speak out against and protest its construction. And it couldn’t be more urgent: Just yesterday, the Acting Secretary of the Army, Robert Speer, instructed the Army Corps of Engineers to grant the Dakota Access Pipeline the easement to proceed, despite the heroic year-long protest by indigenous and environmental activists at Standing Rock.

Last night, I was asked by a reporter to respond to a claim by Wells Fargo that they could not legally pull out of their contractual obligations to invest in the DAPL. Of course, this is absolute nonsense: If they can find a way to defraud two million customers, they can find a way to terminate their contracts with the DAPL! But the fact that they are making these defensive statements is an indication that our movement is having a real effect on them.

Even at the last minute, Councilmembers Juarez and Burgess were determined to water down the language, to take out critical language which recognized both the criminal nature of Wells Fargo and the historic and courageous role of the #NoDAPL movement. Many activists were particularly insulted by the insinuation that the amendments from my office weren’t rooted in facts. Curiously, if you listen to the Council meeting, none of the “facts” are directly challenged. They’re just batted down, spuriously, in the name of “truth.”

There is a lesson here: Up to the last minute, the establishment will fight any movement that is challenging its ties to big business.

By organizing, mobilizing and rallying, by sitting-in and marching, by filling City Hall and relentlessly contacting Councilmembers, we won the day. And we will celebrate our victory, once again, on Monday when we force Full Council to pass our legislation!

The next steps for our movement include:

It’s going to take sustained movement building, mass non violent civil disobedience, and strike actions if we are going to fight Trump and the billionaire class and defeat their bigoted anti-worker agenda.

But I must issue a word of caution: All of the big banks are terrible, and, as long as we have capitalism, our contracts will be with institutions that put corporate greed over human need.

There is no guarantee that when we fight, we will win. But if we do not fight, we are sure to lose. Thank all of you for being part of this righteous struggle.