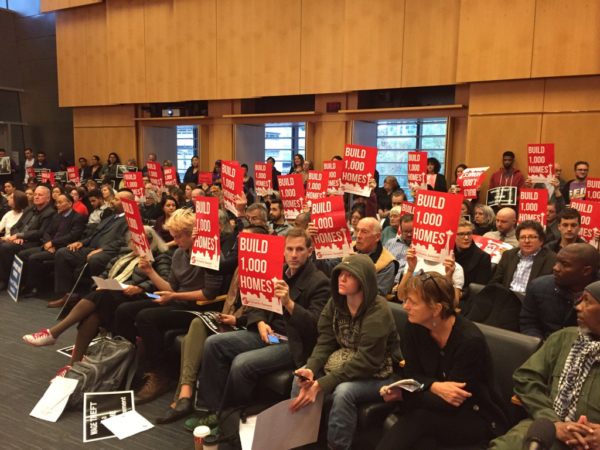 Housing activists in Seattle, organized into the Coalition to Build 1,000 Homes, scored a major victory, winning $29 million for affordable housing in the 2017-2018 budget. They pushed through a final unanimous vote in the City Council on November 21, despite fierce opposition from the city’s Democratic establishment.

Seattle City Councilmember and Socialist Alternative activist, Kshama Sawant, who spearheaded the effort, celebrated the movement’s victory and explained, “Let’s be clear: We won this because we built our coalition and a movement. We made it impossible for corporate Democratic politicians to ignore our proposal” (Sawant.Seattle.gov, 11/17/2016).
The additional $29 million will allow the city to build nearly 200 homes for low-income residents, and it sets an important precedent for using city bonding authority to build desperately needed affordable housing.

For working people in Seattle, especially communities of color, this is a big deal. Seattle is experiencing an economic boom and an unprecedented wave of development, but as luxury condos and office space are built, they often replace older, more affordable units. Rents are rising faster in Seattle than anywhere else in the country, and more than 4,500 people are living on the streets without shelter. Seattle family doctor and coalition member Libby Loft observed, “If I could write a prescription for housing, it would be far more powerful than any medicine at my fingertips.”

The 1,000 Homes movement emerged out of a victory by Black Lives Matter and other activists, who successfully blocked construction of a new $160 million police precinct. Sawant’s office then reached out broadly to service providers, activists, unions, faith communities, housing advocates, and social justice organizations to fight to use that same funding to instead benefit ordinary people and communities of color.

In the end, hundreds of activists and more than 70 organizations joined the coalition, including three dozen religious congregations and 60-plus faith leaders. Many also saw spending the money on housing as the best way to permanently block the new police “bunker.”

We forced the issue front-and-center on Seattle’s agenda and compelled the Mayor and City Councilmembers to respond to our demand, which they had so desperately wanted to ignore.
First, they said it was impossible to build housing with the the police precinct money. After Councilmember Sawant presented a detailed report from city staff explaining exactly how the money could be reallocated, the Democratic establishment changed its tune and instead claimed the proposal was “fiscally irresponsible.” But community members kept hammering them with a simple question: why did the bonds make fiscal sense when proposed for the most expensive police precinct on the continent, but not for affordable housing?

Ultimately, the City Council rejected the full $160 million proposal, voting instead for a much smaller $29 million package and leaving funding available for a new police precinct in the future. While celebrating their victory, coalition activists were understandably outraged by the Council’s serious weakening of the measure, given the gravity and urgency of Seattle’s housing crisis.
Still, even before the struggle had ended, many were excited about using their momentum and experience to keep the fight going. In mid-December, coalition members helped Councilmember Sawant pass groundbreaking tenant rights legislation, capping move-in fees and requiring landlords to offer payment plans over howls of opposition from the real estate lobby.

Now, the coalition is building on the momentum created by this victory to help mobilize to the biggest possible protests against Donald Trump and his right-wing, bigoted administration on Inauguration Day.