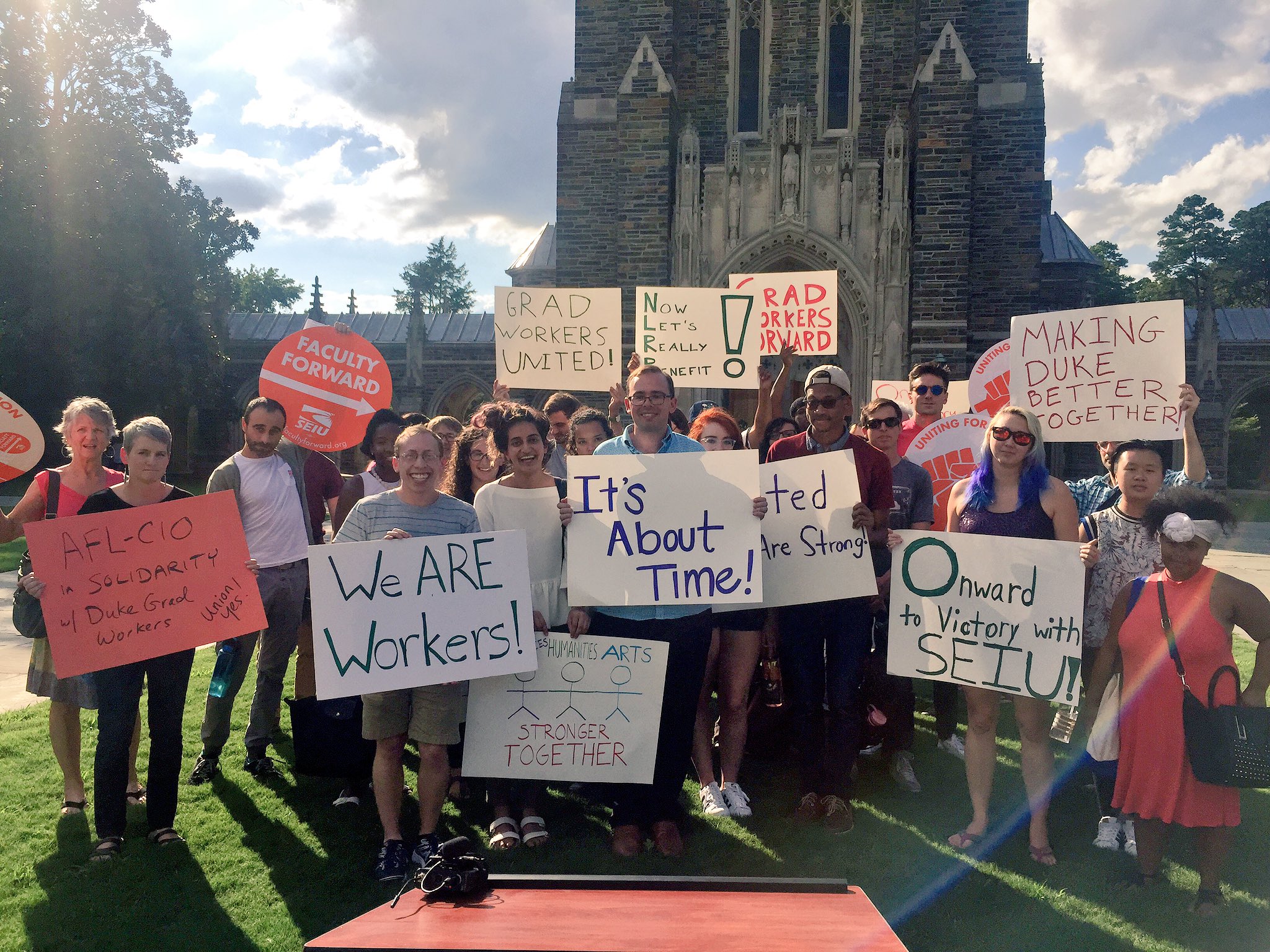 As graduate students across the country struggle to cope with rising tuition and costs of living, those who work as teaching and research assistants at private universities have been fighting for the right to collectively bargain for critical protections like fair pay and predictable scheduling.

The fight for unions achieved a major breakthrough in October when the National Labor Relations Board (NLRB) responded to a Columbia student petition by ruling that graduate students can legally be considered workers, reversing a 2004 ruling. Galvanized by the legal opening, student workers at a number of colleges including St. Louis University, American University, and Duke have begun working with Service Employees International Union (SEIU) to launch a new wave of campaigns.

This window of opportunity, however, is now threatened by the reactionary administration of Donald Trump, which has been clear about its intention to roll back protections for unions and reduce union membership. As president, Trump will appoint new members of the NLRB, which will have the power to roll back this important ruling, as it has under previous right-wing administrations.

The latest phase in the unionization struggle began in 2013, when after years of organizing, graduate students at New York University successfully pressured the university to recognize their right to join United Auto Workers Local 2110. Inspired by the victory at NYU, students at universities such as Harvard, The New School, and Stanford began organizing union drives but encountered stiff resistance from university administrations who hid behind a 2004 decision by the National Labor Relations Board that ruled that student workers are not considered employees and led to the abolition of NYU’s existing student worker union.

In recent years, administrators at some of the wealthiest universities in the country have been taking cues on “cost cutting” from for-profit corporations. While paying exorbitant salaries to executives they are shifting work away from full-time workers and towards part-time and outsourced positions with fewer benefits and denying living wages to workers at the bottom of the payscale. At schools like Columbia University, administrators have paid hundreds of thousands of dollars to union-busting law firms and have spread nearly identical propaganda claiming that unions will seek to control students, professors, and the curriculum.

Student organizers reject the false idea that in the nation’s public universities, where unionization is considered a right and more than 60 schools have unions, unions have somehow negatively impacted academic life. Instead, being able to collectively bargain has helped students win improvements in working conditions, work predictability, health and childcare benefits, and other measures essential for their financial security.

Student workers often work dozens of hours per week teaching, grading, and holding office hours. At some universities, graduate students sometimes carry as much as 30% of intuitions’ overall teaching work. With few protections afforded to them, these students often don’t know if they’ll have a job for the next semester until a few weeks before. They also face unpredictable scheduling, poor benefits, and inadequate grievance procedures. As students put in long hours and struggle to make ends meet, university administrators have sought to portray their work as part of the educational experience and to deny that they are, in fact, employees.

While university administrators have sought to divide campuses by warning that gains for working students will come at the expense of faculty and other teachers, campuses across the country have been banding together in massive shows of solidarity. As universities continue to shift teaching work to underpaid adjuncts while raising tuition costs, both professors and students have stood up to support efforts like the Fight for 15, movements for the rights of university staff, and now, the movement for graduate workers. Defying the divisive calls of university administrators, they demonstrate that all working people have a common interest in ending all forms of economic exploitation under capitalism.

The upsurge in activism among students provides an opportunity for more campuses to organize unions. Organizing must be pursued with a sense of urgency in expectation of the right-wing attacks coming during a Trump presidency. Graduate students are workers and Socialist Alternative fully supports their right to organize. These campaigns should also take up the call for broad demands like a $15 minimum wage at all universities and link their struggles to those in the fast-food industry and elsewhere. Organizing drives can bring forward the demands of the Black Lives Matter movement and use their organizing efforts to shine a light on racial, gender, and ethnic imbalances at universities across the country. The corporatization of education needs to be fiercely opposed, and organizing graduate student unions gives us a key tool to fight back.