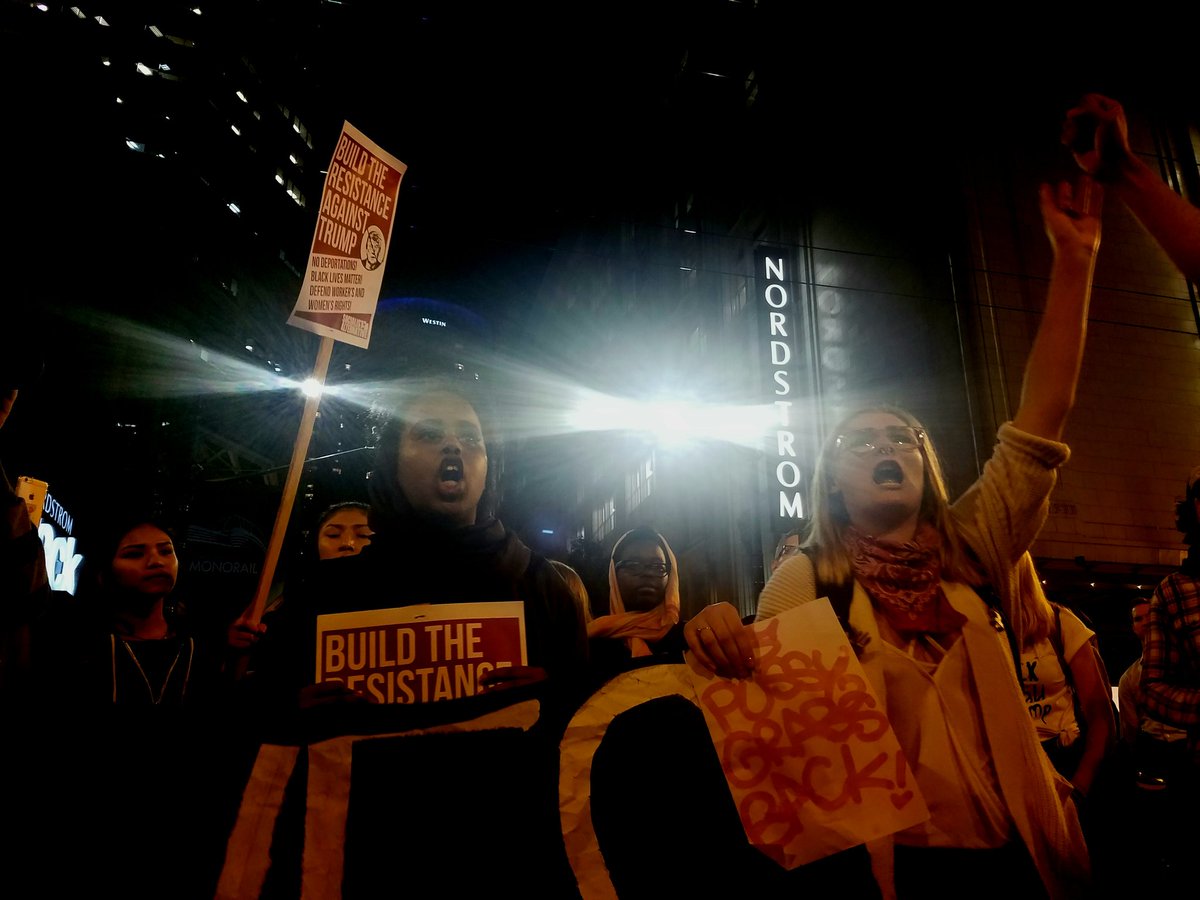 The election of Donald Trump is a call to action for women. His glorification of sexual assault is an insult to the courageous struggles over the last years to combat violence against women. This is only matched with his generally despicable, sexist attitudes.

At the same time, the Republican sweep of the House and Senate puts attacks on women’s rights squarely on the agenda in 2017. And Trump’s early appointments confirm that we should expect a fiercely right-wing administration that we need to fight even more fiercely against.

No Mandate for Hate

There’s widespread recognition in the U.S. that violence against women is a serious and deadly problem. The protests against sexual assault at universities, the outcry against the NFL’s failure to address domestic violence, the #YesAllWomen Twitter storm, and the Slutwalks are all examples of a growing determination to end the truly endemic violence that women face.

The outcome of this election did not represent the majority of Americans agreeing with Trump’s misogyny. In fact a majority reject blatant sexism. Rather, it was a failure of the Democratic Party. Clinton openly represented Wall Street and the billionaire class, and that’s in painfully obvious contradiction with representing the interests of ordinary women.

But this is not a new or coincidental problem. The Democrats’ loyalty to big business keeps them from squarely fighting the profit-driven policies that consistently drive poverty deeper, slash social services, and reinforce income inequality.

The Democratic Party’s defensive approach to women’s struggles has allowed the right to define key issues like reproductive rights for decades. For us to fight the oncoming attacks from the right, we need to build mass resistance. The Women’s March on Washington the day after Trump’s inauguration shows the immediate potential for this, with hundreds of thousands of people expected to attend.

Trump does not have a mandate for his sexism. In fact he received less than 47% of the ballots cast, and nearly half of America didn’t vote at all.  But he has already promised to nominate a Supreme Court Justice who would vote to repeal Roe v. Wade, and will depend on complicity. Rather than “giving Trump a chance,” we need to build a mass movement to oppose a reactionary appointment. If the Democrats are serious about defending women, they should use every tool in Congress, including a filibuster, to stop him.

As history demonstrates, it is through mass struggle, organized resistance and political independence from corporate politics that working-class women have forced politicians to make concessions. Roe v. Wade was won in the first place under the conservative Nixon administration based on the enormous pressure from mass movements.

The Republican Party has already proven its determination to rip apart reproductive rights particularly in the Southern states they have controlled for many years. We need determination to defend and extend them.

Stand Up, Fight Back!

Women aren’t the only group in the crosshairs of a Trump presidency. He has given an explicit platform to all kinds of hate and bigotry – from targeting Muslims and immigrants to blatant hostility to the struggle against police violence. In case anyone thought these were just positions for show designed to whip up the base during the election, Trump is already building a cabinet of rampant racists for his administration like Jeff Sessions and Steve Bannon.

Further, with the House, Senate, and complete control of 23 state governments, the Republican Party is positioned to wage a war on unions. Already they are drawing up plans to decimate job protections and benefits for federal employees.

The very same Supreme Court appointments who will attempt to repeal Roe v. Wade will also be at the forefront of attacks on labor. Women were disproportionately targeted under the “right to work” Friedrichs case which only failed because of the loss of one conservative Supreme Court Justice. At the same time, many of the most fighting unions in the country are dominated by women. This shows that unions have a key role to mobilize against Trump’s sexist agenda, and that this struggle must be united.

Young women want to fight back against inequality and the corporate control of politics. We’ve been at the forefront of all key movements of the last period, from fighting for a $15 minimum wage to the ongoing struggle against racist police murders. This is also why a majority of young women supported Bernie Sanders and his campaign’s call to fight the billionaire class. Despite Trump’s platform for hateful ideas, fierce movements of working-class women are on the horizon. Through a united mass struggle, we can push back Trump’s agenda.

Trump’s despicable attitudes towards women are a reflection of the vicious sexism that capitalism ferments, and is constantly reinforced by systemic gender inequality. To truly end sexism, we need to take on the entire system that holds working people hostage under varying forms of oppression.

If you agree that to destroy sexism we need to destroy capitalism, consider joining Socialist Alternative.