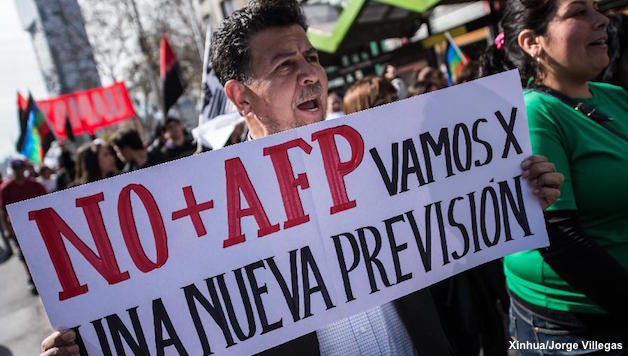 On Sunday 24 July, marches took place against the Administradoras de Fondos de Pensiones (AFP), the private system of pensions, which has operated in Chile since 1981. In the Alameda alone, the central avenue in Santiago, 200,000 marched in the streets. The pension attack was imposed by blood and fire under the right wing Pinochet dictatorship.  We should not forget that Chile was chosen at that time as a laboratory for neo-liberalism. Today we are seeing the consequences in the harshest form of this neo-liberal experiment.

The 24th July was a tremendous day. Hundreds of thousands of workers families and the middle class came out onto the streets in all of the big cities and even in the small localities in response to the call for a protest against the privatised pension system under the slogan “No+AFP” – which has become a pillar of capitalism in Chile.

Literally, throughout the entire country, from Arica in the far north to Punta Arenas in the far south, the co-ordinating committees, NO+AFP, based on trade unions in alliance with other social and community organisations together with Ciudadanos Indignados (net-works of Outraged Citizen) called and organised the marches. Even in outlying areas like Isla Pascua – Easter Islands – streets protests took place, in that case called by the council workers association.

We are now on a higher stage of struggle after many years of street protests, mainly by students, now the working class has come onto the scene of struggle. They are led by a new generation that has not lived through the historic defeats of the past but who are dragging behind them the older generation of workers and the middle class. On Sunday 24th July, the masses began to make the last words of Salvador Allende a reality: “once again the big avenues of Alamedas will open and in them will pass free men and women, to build a better society”.

The nightmare of the AFP

In 1981 the Chilean dictatorship ended the Cajas de Prevision, the old social security system, from which the pensions were paid. They ended the contribution made by the employers and reduced the payments made by the workers from their salaries, thereby reducing labour costs. The AFP was not created to pay pensions. It was introduced to strengthen capital markets and transfer the savings of workers into capital investments at the benefit of capital, boosting the profits and accumulation of wealth by the big economic concerns. They were big oligarchs which colluded together to suck the consumers dry. These large economic concerns have then used this ‘sweet money’ to buy and corrupt the politicians.

Chile is now the most unequal country in the OECD: 1% of the population has more than 35% of the wealth.

In a large part, this is explained by the AFP, which has become one of the main pillars of capital accumulation in Chile. Every month the salaried workers have 10% of their wages deducted. This is then put into the capital markets. That is to say, it is given over to the large economic groups of banks, property, mining, retail chains, pharmaceuticals, agro-and forestry business, salmon fishing – many of them destroying the environment. In return for the use of this capital, absolutely minimal pensions are paid out. For the big companies it is good business. They receive access to a permanent flight of capital at very, very low coasts which they then load out at high interest rates or they invest in new business. If things go wrong, the losses are paid for by the funds from which the workers’ pensions are paid.

The AFP is hated by the majority of the population. The facts explain why. When the AFP was created it was promised that workers would receive between 70% and 75% of their final salary, which is totally divorced from reality. The average monthly pension paid out directly by the AFP does not even reach US$182 ($120,000 Chilean pesos). The highest paid out in the modality pay by insurance companies is US$449 a month. Yet 91% of the pensions are lower than US$236 per month! This is equivalent to 62% of the minimum wage, which is US$379. This condemns the majority of pensioners to live in conditions of absolute misery. This not only complicates the life of the pensioners but also their families given that they then become dependent on their children and closet family members to survive. This is despite the fact that these workers live on extremely low salaries.

On the other hand, some of the most affected by this system are the professional and middle class people. There are cases where lawyers and other professional people have gone of earning US$2276 a month to a mere US$531. Although this is above the average pension payment, it still means an enormous cut for this layer given their standard of living and living costs and especially debts which have been accumulated.

There are cases of teachers that have been widely shared on the internet of pensioned teachers having to go onto to the streets to beg in order to survive.

The constant scandals of corruption of politicians and employers have contributed to a massive increase in bitterness and anger of people. A further reduction in new pensions of 2.1% was announced in July. At the same time, it has come to light that some fraudulent state pensions are being paid out that are of the level of $US7586 per month, like the case of the female Deputy and ex-president of the Socialist Party Osvaldo Andrade. Other cases have included the pensions paid to ex-members of the Armed Forces. In the case of the former senior officers they are exorbitant and have grown at twice the rate of the normal pensions paid out by the AFP.

Everyone understands that the system is completely failing and fails to meet its objective to pay decent pensions for pensioners. Today this is creating a social catastrophe throughout the country.

This is the main reason that one million Chileans came out onto the streets to demand an end of the AFP and an end to the luxury of the employers and banks in having access to its funds, given that the only people not benefiting from the AFP are it’s real owners who pay into it – the workers.

The response that the government and the employers are trying to give is to form a state-owned AFP to gain some time for the existing system. The employers are proposing that the workers should pay an even higher contribution than they do to today’s system and, at the same time, they are proposing the pension age from 65 to 67. This will only worsen the health of the workers.

This mass protest is the first step to change things but it has been a gigantic step forward to struggle against this unjust and perverse system.

The national congress of the movement NO+AFP was attended by 400 delegates from all over the country to agree a plan for struggle and mobilisations. The employers and political elite that benefit from the abuses of the AFP are not going to end it if they are not forced to do so. The co-ordinating committees of the NO+AFP must be strengthened and built throughout the country, they are being led by independent trade unions. This must be built and more people mobilised to prepared for a national day of protest and strike aimed at ending the AFP system and to win back our social rights, beginning with a pension system  based on solidarity and financed three ways, with contributions from the employers, the state and the workers and that is democratically run and controlled by the workers to avoid abuses and corruption.