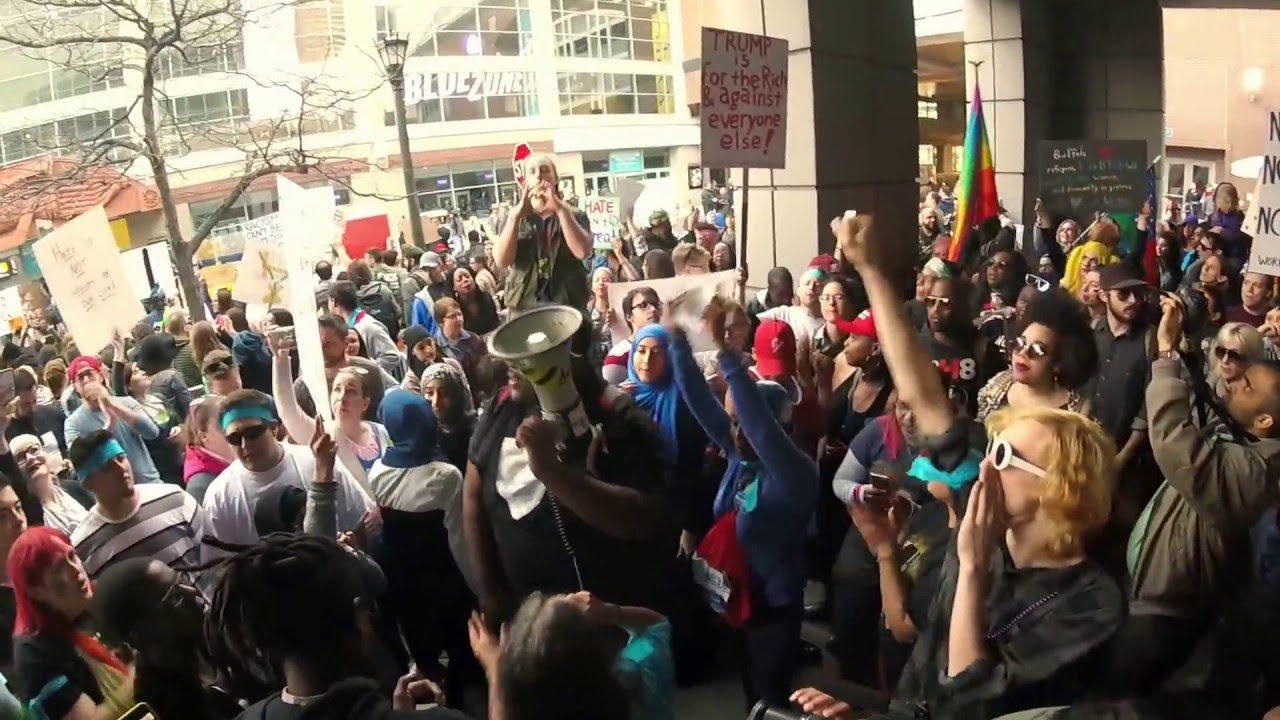 Donald Trump’s stunning victory in the Republican primaries has raised the stakes of the 2016 election. Clinton is positioned to defeat him in November, but her corporate policies could fuel the next Trump. The key to stopping the racist right populist threat is the independent action of working people.

He’s attacked the Republican establishment, the media, free trade deals, and even boasted he would turn the Republicans into a “workers party.” With a mix of racism and anti-establishment rhetoric, Trump has managed to capture a part of the growing populist anger in the U.S.
Of course, no crooked billionaire is going to solve the problems facing working people. His racism only divides us when history shows that solidarity is an indispensable weapon against the establishment.
Already, Trump has given confidence to racist right-wing forces, and we can’t wait for November to fight back.

We should build massive peaceful demonstrations that boldly stand against Trump’s bigotry now, and link this to a pro-worker, anti-corporate agenda that can transform the lives of millions.

Trump’s success thus far points to deeper processes. As capitalism slides further into crisis, right populism can grow. Trump led a revolt of the GOP’s base although the leadership could still attempt to block him at the Republican National Convention.

Trump is in one sense the Frankenstein monster created by decades of Republican racist and anti-immigrant rhetoric. But, still, the traditional party leadership would much prefer dog whistle racism to Trump’s bullhorn.

Their opposition is motivated by a fear their party – and the broader ruling class agenda – is being seriously damaged by Trump. However, while his reactionary bluster might win a Republican primary and demonstrates the space for a more defined right populist force in the US, winning a general election on the basis of Trump’s politics is a different matter.

A June Washington Post/ABC poll found more than 70% of the population has a negative view of Trump, including 94% of African Americans and 89% of Latinos.

Trump has the dubious honor of being the most disliked candidate of one of the two main big business parties in history.

Offsetting this however, is that Trump’s opponent is the second-most disliked candidate in recent history. 55% of the country has a negative view of Hillary Clinton according to the June Washington Post/ABC poll.
Trump will no doubt attack Clinton at times from the left. Clinton supported the Iraq war – which Trump opposed – and she has historically been a fierce advocate for job-destroying corporate free trade deals, which Trump has opposed on the campaign trail.

Many voters understandably see Clinton as the lesser evil particularly on issues like reproductive rights, immigration and the environment. But Clinton’s close ties to Wall Street means that Trump can present himself to many white workers as a lesser evil. The Democrats’ character as a big business party itself is a key reason why anger can end up being diverted toward right populism, if no clear pro-worker alternative is put forward.
Polls have consistently shown Bernie Sanders doing far better against Trump than Hillary. But the Democratic Party establishment would much prefer a Wall Street loyalist to a candidate who supports “political revolution against the billionaire class”.

Right populism will not be stopped in one election cycle but we can’t let Trump be the sole anti-establishment voice this November. That is why Socialist Alternative is supporting Jill Stein of the Green Party whose program continues Bernie Sanders’ political revolution.

If we don’t do this, we leave the field clear for Trump (or future right populists) to exploit the anger and make gains for the right. The recent UK referendum on the EU (the Brexit) provides important lessons on this point.

Many people fear the victory of the Leave campaign in Britain shows Trump could win here. The Leave campaign was dominated by the right wing who made similar anti-immigrant arguments as Trump. But the truth is that while some working-class people responded primarily to these arguments others were voting against the undemocratic bosses’ club that is the EU.

Contrary to endless propaganda in the media, the overall political direction in Britain is not to the right. In fact, anger at EU-led austerity fueled the stunning election of socialist Jeremy Corbyn as Labour Party leader last year, along with growing protests. In the wake of Brexit, polls show growing support for a Corbyn-led Labour Party government.
Tragically the majority of the British left backed the establishment’s Remain campaign. This left the field wide open for the right-wing to tap into the opposition to the EU and austerity. Socialist Alternative’s sister party, the Socialist Party, campaigned for a Leave vote, as part of a broader battle to bring down the existing right-wing Tory government and fight austerity.

Rise of Right Populism in the U.S.

The growth of the Tea Party in 2009 and 2010, seizing on the anger at Obama’s bailouts of Wall Street, in a similar way reflected the failure of the left and the labor movement to lead any struggle against the capitalists’ attacks on working people. The left largely supported Obama and the Democrats and allowed the Tea Party to make big gains.
It wasn’t until Occupy Wall Street in 2011 – an independent movement – that anti-establishment anger was given a left-wing expression and the Tea Party was pushed back. This is the key point: independent mass movements, not the Democratic Party have been the key force in narrowing the space for right populism.

It’s been Occupy, the Fight for 15, the Dreamers movement, Black Lives Matter, protests against the Keystone XL pipeline, the LGBTQ movement, and Bernie Sanders’ insurgent campaign that has shifted the country to the left, not the Wall Street loyalists of the Democratic Party establishment.

Even if Hillary Clinton wins the presidency, her corporate policies will provide fuel for right-wing populism by disappointing progressive workers and youth. Already Hillary Clinton’s supporters on the Democrats’ Platform Committee have blocked opposition to the TPP and many other key pro-worker issues.

It will take independent movements of workers and youth around a clear pro-worker agenda to transform the anti-establishment mood into a force for far-reaching change. Supporting Clinton and the Democrats will not achieve this end.