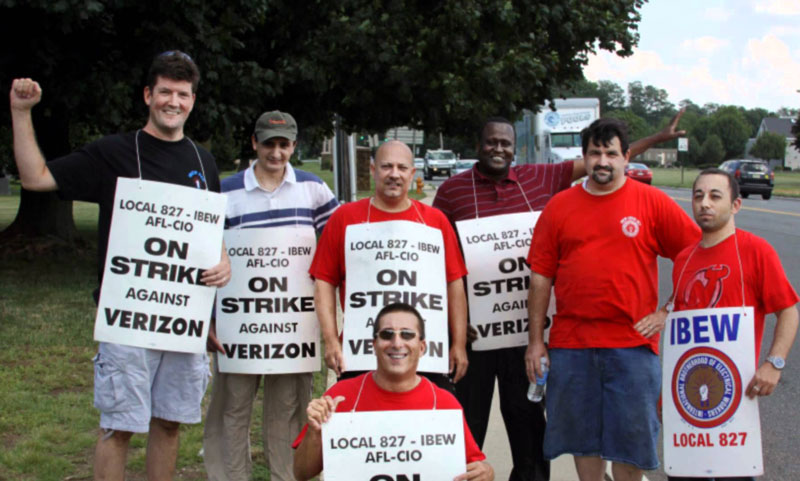 On June 17, the 39,000 workers in the CWA and IBEW unions at Verizon overwhelmingly ratified the contract which ended the biggest strike in recent U.S. history which lasted 45 days. Below is an update interview with CWA activist Jay Harrison, assessing the outcome.

Was it a victory?

Yes. Everyone felt good coming back to work, confidence is high, the supervisors are demoralized, the company threw everything they had at us but we stood strong together and beat back their union busting demands. There were some concrete gains: a first contract for retail wireless workers, 1,500 new call center jobs, and making the many term employees permanent. The company got some flexibility in routing calls between centers but the work will stay union. Our medical costs are going to go up, but no one is surprised by that, it was just a matter of how much it would be. That’s just the world we live in today. As long as we are left to fight for ourselves on issues like health care there is only so much room to push back, that’s why I think the unions should be 100% behind Medicare For All.

What did it take to win?

I think that the huge public support was key, I’ve had lots of people come up to me on the street since the strike and congratulating us on a job well done, working class people were watching us and wanting something in the “win” column. The energy around Bernie Sanders campaign and the presidential primaries played a role as well. It was easy for folks to see our strike as part of the fight against the billionaire class. Verizon lost over $200 million in sales because people were honoring our picket lines and boycott.
How did the union support you?

This strike was an investment in the next generation, and worth every day of it, but it’s a real financial stress to be out of work for that long. We had a good strike fund built up, and donations were pouring in from individuals and other unions. CWA committed to taking care of everyone’s necessary medical costs, and union offices were used as “community support centers” for members in need. Local Officers and Reps kept in touch with everybody, making sure everyone was ok financially as well as keeping things going, organizing picket lines, rallies and other actions.

Do you have any other last thoughts?

There are real limits to the “one day longer” strategy the union pursued. Our hands were really tied by the all the rules on effective picketing, every creative tactic we came up with to go after the scabs was countered by Verizon and the courts. We adjusted and stayed active on the streets, and at least in Philly the scabs were afraid to work in the city, but if it wasn’t for the public and political support this could have ended differently. Now we have 3 years till the next contract and none of the economic pressures on Verizon or the Telecom industry have fundamentally changed. They will be back for more on 2019.

We won this strike but we have to recognize that we just struck for 45 days to hold the line. 45 days to keep what we had. 45 days for a status quo contract. We were not able to reverse any of the concessions from the 2012 contract, new workers still have no pension and are treated differently under the medical and retirement plans. We live in a world where enforcing your union contract is becoming a radical demand and where it takes a 45 day strike by 39,000 workers to get a first contract for seven retail wireless stores. This is the political environment we are dealing with.
But the most important thing is that thousands of workers just learned the lesson that fighting can lead to victories – but not fighting guarantees defeat. If a struggle raises the confidence of working people in their own collective power, it’s a step forward. We need to talk up the lessons of this strike to working people far and wide. Rebuilding a fighting labor movement is going to be complicated but this outcome is an encouragement to all those who want to organize and fight back.