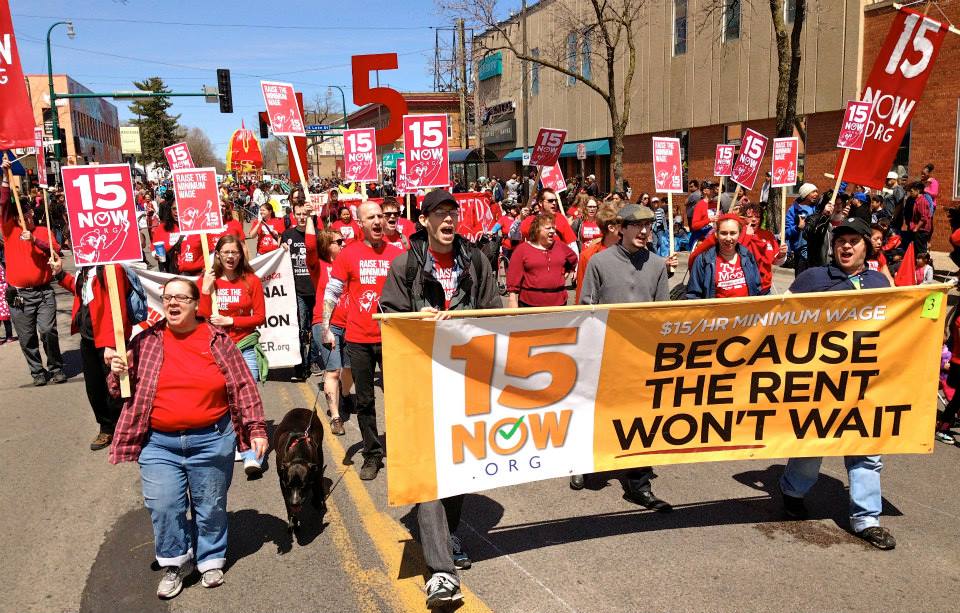 In under four weeks, the grassroots campaign for a $15 minimum wage in Minneapolis has captured tremendous community and labor support. One hundred volunteers have gathered nearly half of the 20,000-signature target to get $15 on the November ballot. Through discussions on the street, over 250 people have donated over $5,000, at an average donation of $15. While presidential candidates raise the $15 demand in national debates, after victories in California and New York many supporters are confident that Minneapolis will be the first Midwestern city to win a $15 minimum wage.

To win, we must mobilize thousands of workers in Minneapolis. Only 7,000 valid signatures are necessary to qualify, but Socialist Alternative and supporting organizations aim to demonstrate overwhelming support before the movement takes a decision in late June whether to turn in signatures and trigger the ballot process. By speaking to 20,000 people in Minneapolis, we’re laying the groundwork for a mass mobilization strategy against big business lobbying City Hall to push the $15 decision into safer channels or trying to defeat our ballot measure at the polls.

15 Now organizes weekly hubs for signature gathering and political discussion on strategy to turn the broad 82% support for a phased-in $15 into an active household discussion. Several key neighborhood associations, representing predominantly East African and Latino communities, are taking up the ballot initiative as an organizing tool, hosting events to discuss how getting active for $15 relates to housing and other struggles facing low-income residents.

The Communications Workers of America (CWA) have played a leading role in mobilizing rank-and-file union members, hosting “Labor for $15” outreach efforts and asking shop stewards to circulate petitions at work. Forty community members and unionized workers, representing bus drivers, university workers, nurses, teachers, laborers, and airport workers, participated in the first labor event on May 14. The Minneapolis Federation of Teachers and Minnesota Nurses Association, two unions that have thrown their weight behind the ballot initiative, are linking up the $15 fight with actions against attacks on teacher tenure and health care.

The City Council can pass the $15 proposal as an ordinance at any time, but the Mayor and others in City Hall hide behind a “regional approach,” an argument echoed by Minneapolis’ main corporate newspaper, the Star Tribune.

A key strategy to combat the resources of big business and the corporate media has been mobilizing working people to fight for these proposals. Hundreds of workers, and even supportive small business owners, packed City Hall to speak in favor of ESST. Winning $15 an hour will be no different. Big business will spend millions to defeat a proposal like $15 an hour, and it will truly take a well-organized movement of low-wage workers, backed by unions and flanked by community allies, to win a living wage in Minneapolis. 15 Now Minnesota’s rapid success gathering petition signatures, mobilizing fresh activists, and being financially viable based on small donations from working people points to the immense support this proposal has among ordinary people in Minneapolis.

As in other cities, big business will raise questions on the legality of the proposal in order to undermine workers taking the independent initiative outside business’ influence in City Hall. Big business has filed lawsuits in many other cities after $15 an hour has been passed, and will undoubtedly do so again, but the key element to prevent them from repealing $15 an hour is the power of working people who recognize the threat these big-business lawsuits mean to their livelihoods and who are prepared to organize to defend their gains.

To win in November, 15 Now Minnesota needs to build an army prepared to win a citywide vote while under constant attack from big business. Before triggering the ballot initiative, we’re proposing a mass meeting, welcoming anyone who wants to win $15 an hour to discuss our ballot strategy and commit fully to what will be a historic campaign in Minneapolis.