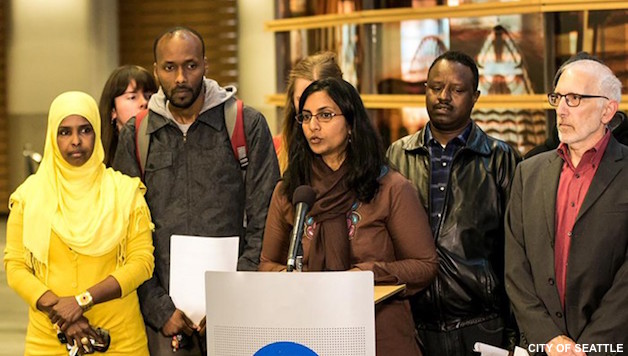 Haglund was attempting to raise rents by as much as 100% in spite of extensive maintenance issues in the apartments (ultimately, 225 housing code violations were identified). The tenants, many of whom are East African immigrants, contacted Sawant, who immediately went to inspect the building, and brought local media with her, who caught the horrible conditions on camera. Organizing together with the tenants, the Tenants’ Union of Washington State, and other housing activists, her office carried out a successful protest action that forced Haglund to back off.

Councilmembers Sawant and Nick Licata brought a proposal a few weeks later for a new Seattle ordinance, dubbed the “Carl Haglund Law,” to outlaw rent hikes in Seattle for buildings with code violations.

At the time, Seattle elections were in full swing and the political establishment and pro-corporate councilmembers were under pressure to maintain a progressive veneer. None publicly opposed the measure initially, but it was uncertain whether it would ultimately pass once the spotlight of the elections had moved on.

This week Seattle Mayor Ed Murray signed onto the proposal, and it now appears headed to unanimous passage in May.

Wealthy developers, big property owners, and their lobbyists – who have long dominated Seattle politics – have opposed the Haglund ordinance and sought to raise concerns about its legality. “The city already, under current state and city laws, has clear and direct authority to abate problem properties without wading into any discussion of backdoor forms of rent-control,” said Rental Housing Association of Washington spokesperson Sean Martin.

The outrageous state ban on rent regulations was written by the real estate lobby to oppose any restrictions – no matter how reasonable or limited – on rent increases, preferring to keep all control over rents (and profits) in their own hands. But for the lobby to legally challenge the new ordinance would be to re-focus public attention on the absurdity of the rent control ban, with a potential to provoke wider backlash in a city, where massive rent hikes (many 100% or higher) have sparked public outrage. So the ordinance will likely go forward unchallenged while registering a blow to the state ban on rent regulations.

The broad support for reasonable tenant protections also puts the Mayor and pro-corporate councilmembers like Tim Burgess in a difficult position. As has happened with so many issues that our movement has led the way on, the establishment has ultimately come on board once outright opposition became unviable. Following the mayor’s announcement, Seattle publication Crosscut noted “Murray has a bit of a reputation for bandwagoning on popular issues and this won’t change that.”

Similarly, last fall the establishment saw the writing on the wall with major mobilizations in favor of rent control organized by Sawant, Licata, and tenant and community activists. Council President Tim Burgess (himself up for re-election), had strongly opposed rent control. But, backed against the wall in his own re-election race by tenant advocate and former Tenants Union president Jon Grant, he was forced to go along with Sawant’s proposal for a resolution to lift the Washington State ban on rent control (though attempting to take credit by bringing a separate resolution).

Councilmember Sawant plans to bring a series of tenant and affordability ordinances to the council for approval in upcoming months, including caps on move-in fees, a massive expansion of the tenant relocation assistance program, and commercial rent controls to benefit small businesses, which are also being priced out of the city.

As all of our victories in Seattle have shown over the past period – from the Haglund Law, to defeating 400% rent hikes at Seattle’s Housing Authority, to the $15 minimum wage – the key to winning gains for ordinary people is to build our own movements and elect our own independent political representatives who will unambiguously fight for our interests.