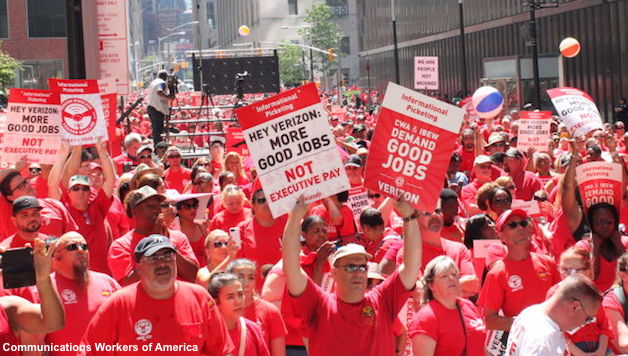 Communication Workers of America (CWA) and the International Brotherhood of Electrical Workers (IBEW) have called a strike against Verizon in the middle of the most hotly contested Democratic Party primary in decades. 40,000 Verizon workers from Virginia to Massachusetts walked off the job last Wednesday morning. The same day, Bernie Sanders was on the picket line with Verizon workers in New York. His denunciation of Verizon’s “corporate greed” led to CEO Lowell McAdam calling his comments “contemptible.” Sanders shot back: “I welcome their contempt.”

The CWA has spent ten months bargaining fruitlessly with a company determined to force its union workers into “parity” with the labor market. The outrageous concessions that Verizon is demanding are par for the course in today’s  environment: destruction of job security and pensions, increased medical costs, increased use of term and temp workers, offshoring more and more work, and a whole shopping list of changes to work rules to “improve efficiency” – including the right to “loan” workers out of their home state for four months a year. Verizon is a highly profitable company – one that pays next to nothing in taxes – leveraging new technology and changes in public policy to take back the hard-fought gains in basic living standards that telecom workers won from “Ma Bell” over the past 75 years.

Verizon’s economic demands are based on its agenda to separate itself from its legacy as a regulated public utility that provides universal access to an integrated telecommunications network. Verizon wants to transform itself into a home entertainment, wireless communications, and Internet data services provider. In the build-out of its new FIOS network, Verizon is redlining entire communities it deems “unprofitable.” Let’s not forget that Verizon Wireless and FIOS were built on the profits generated over the years from the landline network – and, without the infrastructure backbone, none of the new technologies and services would work.

On the Picket Lines

Telecom workers have a proud history of militant struggle but, more and more, all effective tactics to wage a strike are restricted and illegal. Here is the scene played out at countless work locations across the Mid-Atlantic: mass pickets of Verizon workers surround the office, standing shoulder to shoulder with linked arms, the watching scabs unable to force their way through the peaceful but determined picket line. Sheriffs walk around the line reading out the court injunction limiting pickets to six per entrance. Slowly, resentfully, the arms drop and the police begin to escort the scabs into the building. Until the labor movement rebuilds the capacity to build effective picket lines and prevent scabbing, we will be fighting with one hand tied behind our back.

The barrier to victory is not the willingness to fight or any lack of courage and tenacity on the part of Verizon workers. It is the legal and political forces aligned against us. During the 2011 strike, Verizon fired many employees for “strike misconduct,” most of them on flimsy, trumped-up charges. While the union was able to return the majority of these workers to their jobs, it came at the price of a signed agreement with the company on future conduct on picket lines.

The Verizon strike needs to be turned into a broader fight against the bosses’ ongoing offensive against what is left of the labor movement. We need to broaden our fight beyond the traditional limitations of economic industrial struggle and challenge the corrupt corporate power structures that are destroying the lives of millions of working-class families. We can seize this opportunity to strike back at the billionaires and go on the offensive by mounting a political challenge to the Democratic Party establishment and uniting with the grassroots working-class movement mobilizing around the Sanders campaign to begin building an independent party of the 99%.

Let’s not forget that telecom deregulation began with a Clinton in the White House. Instead of “Medicare for All,” the Democrats brought us the Affordable Care Act. Our so-called “Cadillac health plans” are a key target of Verizon bosses in the negotiations. Bill Clinton gave us NAFTA and Hillary gives us the TPP. The Employee Free Choice Act was left to die in Congress and no one is even whispering about repealing the tangled web of restrictive anti-union legislation that strangles all efforts to organize. Congress, the FCC, the courts, State Houses, and utility boards are flooded with corporate money and lobbyists that write and enforce the rules in favor of the huge communications corporations.

More than ever, we need a national plan for implementation of new technologies into the telecommunications network so that they benefit all of us! Socialist Alternative calls for an immediate halt to any further deregulation of telecom services. We need a national plan to upgrade the wireless, landline, and broadband networks and bring these services to all our communities by bringing them back under public control. We built it! We paid for it!  For reliable and affordable universal service!