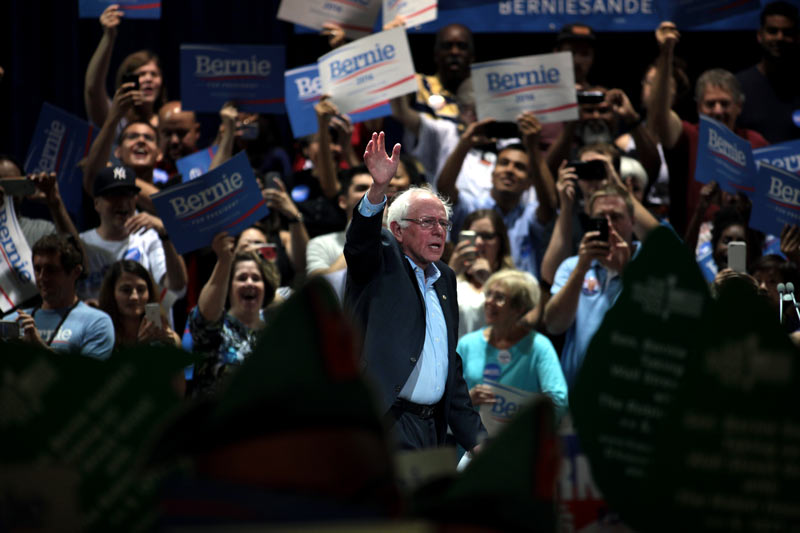 The billionaires that control the Democrats don’t want Bernie Sanders’ radical program to win. Last December, the Democratic National Committee tried to sabotage Bernie’s campaign by cutting off his access to vital voter information. The party establishment has mobilized the unelected super-delegates as the reserves should their chosen candidate run into further difficulties. The Democrats even tried to keep Sanders off the ballot in New Hampshire. Coin tosses were used to defeat him in Iowa. They used illegal campaigning in Massachusetts and looked the other way while Arizona engaged in blatant voter suppression.

The corporate media either ignores Sanders or calls him “unelectable” despite polling higher than Clinton against Trump. Yet, Bernie has won many states, and the enthusiasm for his message – mega-rallies across the country and tens of millions in donations from working people – shows the potential for a new party in this country that refuses to take a dime in corporate cash. The “unDemocratic” Party is what stands in our way.

Every vote for Bernie is a vote for a $15 an hour minimum wage, free college tuition, and a trillion-dollar jobs program paid for by taxes on the richest 1%. We want to be able to vote for Bernie and his program in November too! The Democratic Party is doing everything they can to block us, and we need to lay the groundwork now for Bernie to run as an independent if he loses the nomination. Socialist Alternative is campaigning for Bernie to run as an independent. Below are some common questions and answers from discussions we’ve had with activists in Bernie’s campaign.

Bernie said he won’t run as an independent. Why should we pressure him?

Despite being pro-union all his life, Bernie wasn’t for a $15 an hour minimum wage until recently. He responded to the movement and started putting this demand at the forefront of his campaign. Despite getting arrested fighting against racism and discrimination, Bernie wasn’t putting the struggles of people of color as a centerpiece of his campaign until Black Lives Matter activists got involved. Now, Bernie is speaking clearly about the need to fight institutional racism with an excellent program of demands.

We can affect Bernie! Let’s build a movement for him to run as an independent! As Bernie has said over and over, this campaign isn’t about him, it’s about us. It’s about what we’ve built. We should have a voice in how to continue the political revolution. Bernie should call a conference of all his supporters to urgently discuss the way forward, and Socialist Alternative would argue for this conference to be a step towards an independent campaign and a new party of the 99%.

I’m afraid of Trump’s racism and sexism. Wouldn’t Bernie split the vote and let Trump get into the White House?

This is what Bernie himself raises, and it is absolutely correct that Trump is a real threat to the rights of working people, women, and people of color. However, a Hillary candidacy and potential presidency would be a gift to Trump and the right-wing populist policies he represents. Hillary’s pro-corporate, warmonger policies would lead to more of the poverty and discontent that fuels Trump’s train of hate. To cut across Trump, we need protests that connect the fight against racism to a working-class program for jobs, education, housing, and healthcare. We also need candidates – like Bernie – that refuse to take a dime in corporate cash to show a real alternative to the establishment and the Wall Street domination of both parties.

Still, we realize that many people would be horrified at the prospect of an open bigot having a chance at sitting in the White House and would be unwilling to risk having a “spoiler” campaign. Bernie could still run an all-out campaign in more than 40 states and run no risk of playing the “spoiler.” Most states will be won by either a Democrat or Republican with a clear majority. Less than ten will be “swing states.” In those swing states, an independent Sanders campaign could organize people to build the political revolution and fight for the strongest possible vote in neighboring states that are already guaranteed to be won by either a Democrat or Republican. This is one tactic that could be discussed as an option by a conference that pulls together all Sanders supporters to talk about next steps for the political revolution.

Isn’t it too late for Bernie to get on the ballot as an independent?

No, it isn’t. Jill Stein is currently the strongest left candidate outside of the two major parties. Jill and Green Party activists are still fighting to get her on the ballot in all 50 states. Jill has been friendly towards Bernie supporters, and he could potentially run alongside her in a historic step forward for working-class politics.

We can do this! Let’s build for the strongest independent left challenge in 2016 and gather the strength to build a new party of the 99%!