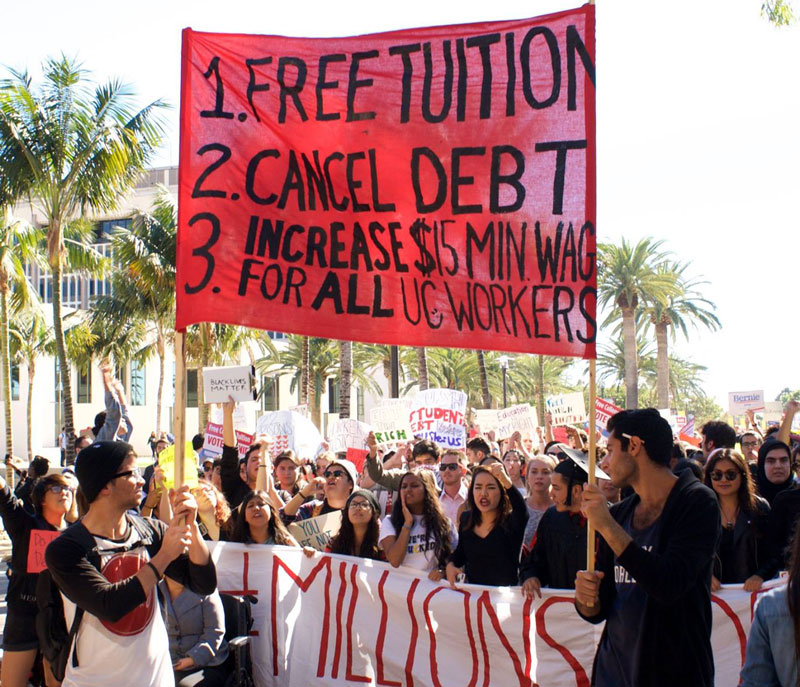 On November 12, the first #MillionStudentMarch took place on campuses across the United States.  Students on 115 campuses – more than 10,000 all told – united for the first National Day of Action to demand:

On April 13, we’re going to do it again, this time centered around the growing movement to stop Trump and his agenda of racism and bigotry!  We’re declaring a second National Day of Action to build on the success of the first #MillionStudentMarch, and to link up the growing student movement with the wider struggle to build a left political challenge to the far right and the political establishment.

Even before the first #MillionStudentMarch, students and workers across the country moved into action around these three demands. Recognizing the appeal of these demands, organizations such as the United States Student Association, Student Labor Action Project, College Students for Bernie, and National Nurses United have all endorsed the #MillionStudentMarch.

Bernie Sanders’ presidential campaign has popularized the call for free public college and a $15 an hour minimum wage. His call for a political revolution against the billionaire class is critical to both win these demands and to undercut the right-populist appeal of Trump. However, even Bernie himself says that we won’t win free college – much less stop Trump’s attacks on immigrants, workers, and women – without a mass movement of millions.

We want to bring this political revolution into the streets by rallying around three demands to move students and working people across the country into action. The right-wing populism of Trump is fueled by growing economic and social anxieties brought about by the economic crisis, by the policies of Wall Street. To be effective, a mass movement against Trump must be built around demands that offer a left-wing anti-establishment alternative of solidarity between students, workers, people of color, and all those suffering under corporate domination.

That’s why our April 13th #MillionStudentMarch to Stop Trump is continuing the call for free tuition, cancellation of student debt, and $15 an hour.

Access to higher education for students in the United States is under attack.  According to the National Center for Education Statistics, prices for undergraduate tuition, room, and board at public colleges and universities rose 40 percent from 2002 to 2012.  Similarly, prices at private nonprofit colleges and universities increased by 28 percent. This is approximately four times the rate of inflation!  At the same time, states have spent less per student on higher education following the Great Recession.  Meanwhile, recent budget agreements have reduced the Pell Grant Program by nearly $5 billion per year.  More than nine million students rely on Pell Grants to complete college, including more than half of Latino and Black undergraduates!

Cancellation of All Student Debt

By fighting to cancel all student debt, we want to challenge the rampant inequality and institutionalized racism in higher education.  The average college graduate in the Class of 2015 has over $35,000 in debt.  More than 40 million Americans share a total of $1.2 trillion in student debt, more than 58 percent of which is held by the poorest 25 percent of Americans.  Meanwhile, Congress passed legislation that doubled the interest rates for federal student loans in 2013.

According to Demos, 81% of black students finish college with student debt, compared to 63% of white students.  Not only do they borrow more often, the average Black student borrows nearly $4,000 more than the average white student!  Sallie Mae, the largest private student loan lender in the country, frequently faces class action lawsuits for its racist and discriminatory predatory lending practices.  Since 2008, states have continuously divested in higher education, making students more dependent on lenders like Sallie Mae.

A $15 an Hour Minimum Wage for Campus Workers

While top administrators take home six and seven figure salaries, many campus workers are paid poverty wages and are forced to rely on federal and local assistance.  Similarly, most adjunct professors are paid abysmal salaries per course.  Since 2012, low wage workers across the United States have fought for a $15 an hour minimum wage.  This challenge to economic inequality has captured national attention and led to concrete victories for workers in several cities, such as Seattle and San Francisco.  It’s time to bring this fight to our campuses.

Cafeteria workers, janitors, and many other workers often face low wages and long hours.  Nearly half of minimum wage workers are people of color, with many more making just above the minimum wage.  Meanwhile, the average public college president receives $428,000 per year and the average private college president receives $475,403 per year.  Other top administrators have similarly high salaries.  At the same time, some schools invest exorbitant amounts of money in new stadiums while the people who make our schools run can’t pay their rent.

2016 has already been a year of unprecedented political development. Bernie Sanders’ campaign has galvanized millions of Americans, young and old, who are sick and tired of the rule of the 1%.  His call for tuition-free public college has resonated with students from coast to coast.  Most importantly, his emphasis on the need to build a movement to win points in the right direction.

Victories for students and working people aren’t handed down from benevolent politicians on either side of the aisle, they are won when people stand up and demand it. And the growth of the far right will only expand if we don’t build a political voice outside the corporate controlled Democratic Party. If we want to win these demands and stop Trump we need to get organized and mobilize to fight for it.

As the conversation about skyrocketing tuition and student debt has entered the national conversation, Barack Obama and Hillary Clinton have voiced support for free community college.  While this is absolutely a step forward, it is nowhere near enough.  Similarly, the attacks on access to higher education have been carried out by both parties of the billionaire class, and it will require an independent force to carry this struggle forward.

It is key for students to join the fight for $15, the Black Lives Matter movement, and other struggles taking place both on and off of our campuses.  We need to unite our movements to fight against this whole exploitative, racist and sexist system of capitalism. If the political system limits our choices in November to Trump and Clinton, we need to show that another, movement based political alternative exists.

The first #MillionStudentMarch showed the potential to build a nationally coordinated student movement.  We have the opportunity to continue building on our campuses and in our communities and for an even bigger National Day of Action on April 13!

Visit studentmarch.org for more information and to get involved!

To declare a #MillionStudentMarch action on your campus, just make a Facebook event and send the link to millionstudentmarch@gmail.com.  We’ll help you promote it!

No Compromise on What Minneapolis Educators & Students Deserve!