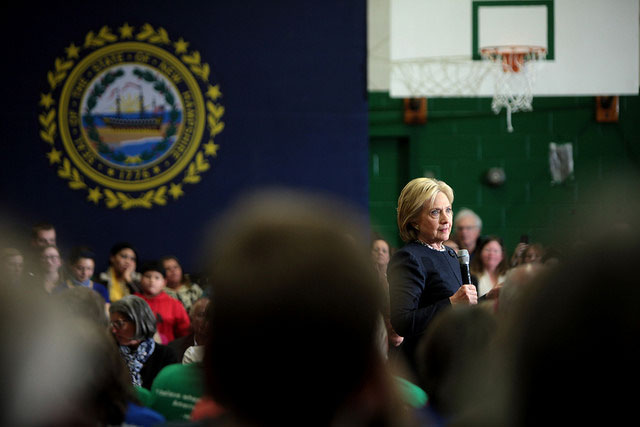 When Hillary Clinton suggested she “wouldn’t keep any school open that wasn’t doing a better-than-average job,” at an event late last year in Iowa, social media lit up. Almost all attention went to the clumsy use of math. The Washington Post projected a model showing that if all schools below average were closed each year, within a handful of years almost all schools would be closed. But few commented on the substance of her remark.

The day after the rally the Presidential candidate’s handlers hurriedly repackaged and played down her comments. But was Hillary Clinton’s casual suggestion of closing schools an honest mistake or a moment of honesty?

School closures are on the rise. Twice as many elementary schools are likely to be closed these days than a decade ago. Few major cities have not had a recent wave of school closures. Most affected are the children in impoverished neighborhoods whose schools are deemed under-performing. Schools have become the battleground that factories were thirty years ago. Capitalism is reshaping the education environment, destroying unions where they can and undermining the stability of neighborhoods. In their place, sometimes kids have to take not just one but two bus rides  to the next nearest school and sometimes the only viable choice is a for-profit charter school with fresh, inexperienced teaching staff.

The axe of austerity is always swinging over the heads of the poor. Poor neighborhoods not only bear the brunt of police brutality, unemployment and the lowest paid jobs, but they are more likely to experience low performing schools. Gentrification worsens the situation: rents go up and schools that enroll predominantly students of color are often closed. Public investment never arrives to lift poor communities up when they need help. But such investment is always there in changing neighborhoods that are paving the way for the displacement of the poor.

In 2011, when a dozen elementary schools in Oakland faced closure, the School Board held public hearings. As dozens of African American moms took to the mike to describe their schools’ deep roots in the neighborhoods and the close knit networks of generations of cousins, Board members simply checked their watches and phones. They already had a plan, the hearings were window dressing.

The scene from Oakland could have been from Chicago, New York, Philadelphia, Washington D.C., or any of the scores of cities hit by massive school closures. And this is a plan. A plan that puts the billionaires and their hired think tanks on one side and the working class and poor communities on the other. One side wants education privatized, de-unionized and to divert  public funds into the pockets of a vast army of private consultants. The other side wants public education to remain as a public service that everybody has equal access to, that is not controlled by big corporations. It is into this conflict that charter schools and double-speaking politicians wade, convoluting the issues so as to push through their corporate agenda.

Eli Broad, the billionaire at the head of this war to close schools and transform public education, operates a college where School Board members and School Superintendents can learn the ropes for privatizing and promoting charter schools. The Broad Foundation has a tool box guide to help close schools entitled, “Closing Schools as a Means for Addressing Budgetary Challenges.”

This Is Where Hillary Clinton Returns to the Picture

Hillary Clinton is well known for having been on the Board of Walmart, the anti-union, pro-school privatization corporation from 1986-92. It is less well known that she also once worked as the lawyer for Eli Broad. She and Bill Clinton continue to be close friends with him. Bill Clinton and Eli Broad most recently publicly embraced at the opening of the Broad Museum in LA. Broad wants to raise $490 million to build 260 new charter schools in LA and to close half of LA’s current public schools.

The billionaire Broad, along with other school “reformers” such as Bill Gates and the Walton family, have been strong financial supporters of the Clintons’ two corporate juggernauts: the Clinton Foundation and the Clinton Global Initiative. Through these organizations the Clintons have received over $2 billion from corporate America. Last year a Wall Street Journal article, described the close relationship between the Clintons’ foundations and the corporations Hillary represented globally as Secretary of State (“Hillary Clinton’s Complex Corporate Ties” (2/13/15)). As Secretary of State, Hillary Clinton pushed deals around the world for GE, Exxon, Boeing and Microsoft. Her under secretary was an investment banker for Goldman Sachs and the entire web of her relationships were closely knit within the most dominant players of the US capitalist class.

Since the great recession of 2008, a huge shift has taken place among the US electorate. In the Gallup Poll of professions Americans rate as honest and ethical, outside of the medical field, the top job was teachers for whom 60% of respondents gave them “very high or high” thumbs up. The least trustworthy profession was political lobbyists at 7% just barely behind Members of Congress at 8%. This is a key weakness for Clinton’s campaign: if she is seen as being in bed with corporate lobbyists fighting public school teachers or with other sections of the corporate elite, her appeal rapidly fades. This is why she has gone to such lengths to repackage herself during the primaries.

At the heart of this contradiction is the leadership of the two national teachers’ unions. The AFT in June and the NEA more recently have endorsed the Democratic Party establishment candidate Hillary for President. Hillary Clinton’s very close relationship with the big corporations that are eager to gut our public schools and de-unionize them should have ruled her out for an endorsement from teachers’ leaders.

In 2011, I was the PTA President of Maxwell Park elementary school, a so-called low performing Oakland school that was on the school closure list. Our students were overwhelmingly children of color and some recent immigrants. Our school community: the parents, teachers, school workers and students loved our school, and we marched, demonstrated, attended and even  occupied school board meetings. But in the end we were outgunned. Corporate America and their paid-for employees had a plan. They were very well prepared. Their people were elected onto the school board years earlier and were ready for the fight. Our school was closed.

For the children involved, a school closure is a trauma. School closures interrupt and can destroy the fabric of a local community. They strengthen the powers that be and can undermine the morale of working people and our communities.

When Hillary Clinton mis-speaks on closing schools, she is only mis-speaking in who she is talking to, not in what she is saying.

Unity with The Democratic Party Cost Nina Turner the Election