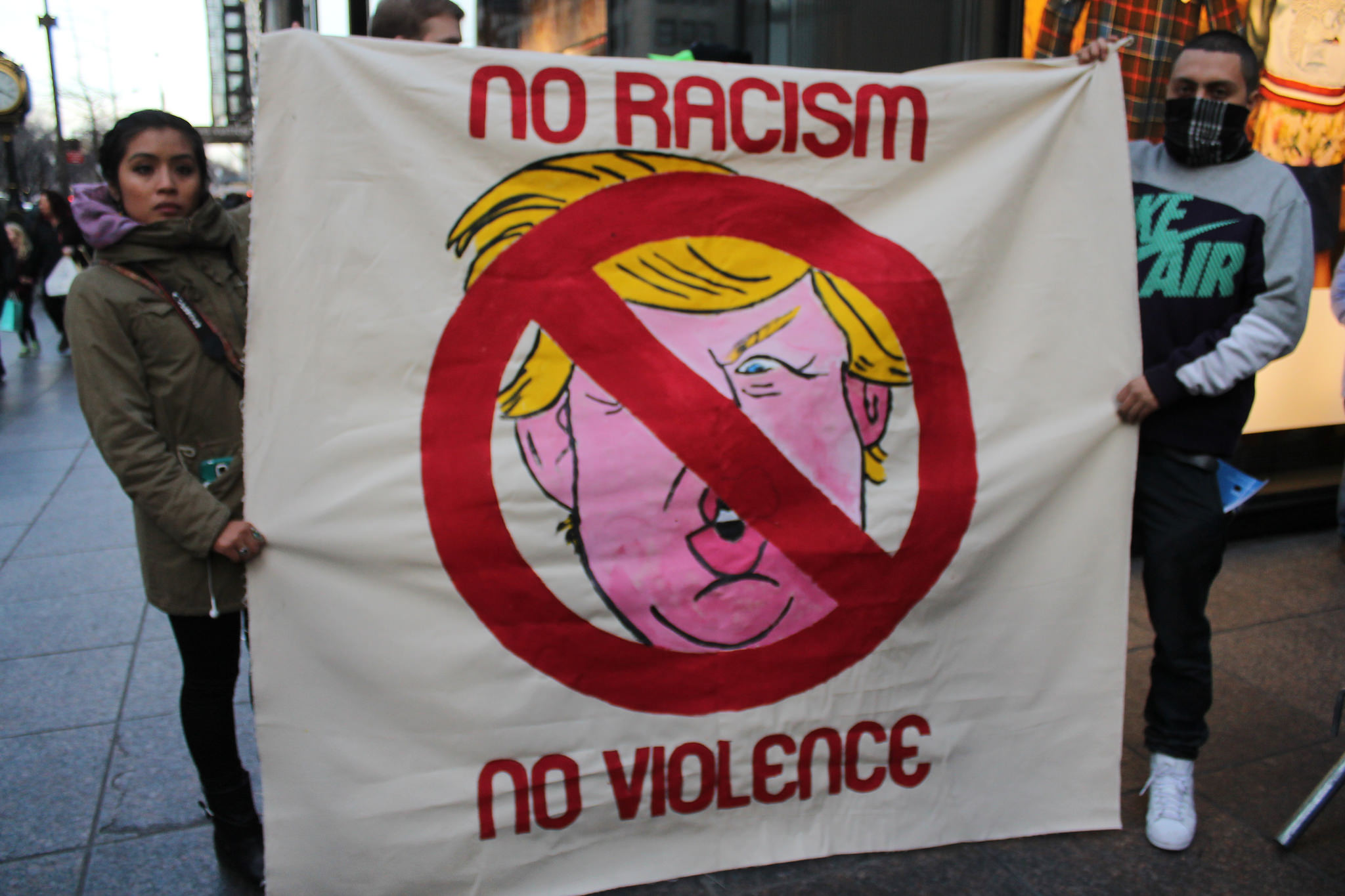 Stopping Trump means building a left political alternative that can unite working people in a common struggle against the corporate establishment.

Trump must be stopped and we can’t wait for November. Once seen as a bad joke, his campaign now represents a huge danger to working people. The Republican party cannot wash their hands of Trump.  For decades they’ve used coded racism, sexism, and nationalist rhetoric to whip up electoral support. Trump’s unfiltered bigotry is a Frankenstein monster of their own creation.

But what makes Trump so dangerous is his populist anti-establishment message appealing to those who are fed up with corrupt corporate politics.  He redirects white workers’ and middle class anger at unemployment, poverty, and social decay toward nationalist, racist, and authoritarian solutions. In reality, Trump’s divisive politics weaken working people’s capacity for collective struggle and provide a smokescreen for the ruling elite.

Over decades the corporate backed Democratic Party has failed to offer an alternative for working people, to defend women’s rights or to protect immigrants against racism. Their capitulation to Wall Street creates fertile ground for right wing populists like Trump and Cruz to pose as the anti-establishment alternative.

We need a powerful mass movement against this right wing threat. The starting point is coordinated mass protests all across the country, uniting working people, students, immigrant rights organizations, the black lives matter movement, unions and everyone else terrified by the rise of Trump.

Already Trump campaign events have been met with bold protests, facing down violent threats by some of his supporters. Last week, leaders of over twenty prominent progressive organizations and trade unions, including MoveOn.org and SEIU, signed onto a letter calling “for a massive nonviolent mobilization of working people, students, immigrants… to stand up to Trump’s bullying and bigotry,” alongside a major voter registration drive to defeat Trump in November.”

Socialist Alternative supports this initiative. However, a central question is whether these organizations will turn anti-Trump protests into pro-Clinton rallies? Or will they offer an authentic anti-establishment alternative to undercut Trump’s support?

Clinton Will Only Broaden Trump’s Support

While Clinton’s establishment and Wall Street ties make her a perfect target for Trump’s right-populist attacks, Bernie Sanders’ message of a political revolution against the billionaire class has the ability to cut across much of Trump’s support. There is a significant reservoir of  of nationalism, racism, and sexism Trump is tapping into, but the real fuel propelling his campaign is the deep anger among mainly white middle and working class people ruined by the economic crisis and enraged at the corporate corruption of politics.

Bernie’s call for living wage jobs, free education, free healthcare, and investment in our schools and our communities can unite working people around an anti-establishment alternative. That’s why Bernie should continue running through November as an independent if he is blocked in the Democratic primary by the huge weight of the Party establishment, the corporate media, and Wall Street super-PACs unified to defeat Sanders’ political revolution. .

Some argue that this could “spoil” the election and that we have to vote for Clinton, the “lesser-evil,” to stop Trump. Yet there are 40-45 “safe” states which will be clearly won by the Democratic or Republican candidates. There is absolutely no reason Bernie could not campaign all out in these states until November, linked to the project of building a new party of the 99% to lay the foundations for future elections while strengthening social movements in between. Bernie Sanders and his supporters should discuss, as a tactical question, whether to put his name on the ballot in the small number of swing states in order to take the “spoiler” concern off the table.

The alternative to this strategy – allowing Clinton, a national symbol of the corrupt corporate establishment, to stand as the only alternative to Trump – means widening the space for right-wing populism. If no left alternative is offered in the general election, Trump would use Clinton as a lighting rod and have a virtual monopoly over the broadening anti-establishment revolt.

On the the other hand, a strong result of a Sanders’ campaign running all the way through to November would not only cut across Trump’s support in 2016, but would cut across the threat of a strong Trump campaign boosting the of confidence for all kinds of right-populist and racist candidates standing in future elections.

Instead, an independent Sanders campaign running all the way through November could prepare the ground for many more independent, left, anti-corporate candidacies in the near future. We need the revolt against Wall Street to expand from Bernie’s election campaign into an organized, ongoing movement of millions that fights for $15/hour minimum wage, for free education, for Medicare for all, ending mass incarceration, and to defend workers’ and immigrants’ rights.

The real roots of Trump’s right-wing populism are found in the crisis of capitalism itself and the complete failure of both parties to address it. We need a new party of the 99% to provide a political alternative and unite people across race, gender, religion, sexual orientation and nationality, into a common struggle against the domination of Corporate America over our lives.

We must fight for a new society based on democratic socialism as the answer to the corruption, massive inequality, racism and exploitation of capitalism.