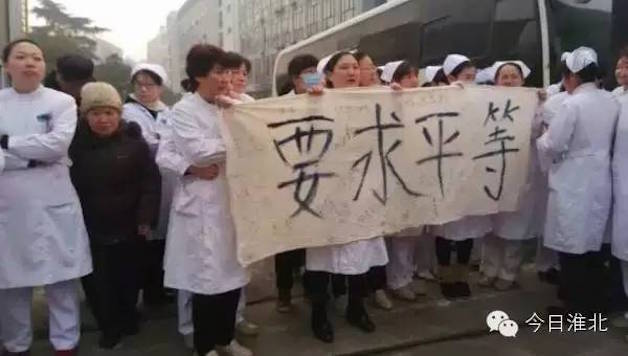 As its factories restarted after the Chinese New Year holidays, China was facing its worst economic crisis in decades. The government’s official data do not give the true picture, maintaining the fiction of GDP growth of 6.9 percent in 2015. Even this represents the weakest growth in 25 years. But several independent agencies put the figure as low as 3 to 4 percent. The economic pain is spread unevenly, with industrial strongholds like the northeast suffering what is close to a full-blown recession (i.e. negative GDP), while things are better in the richest first-tier cities and some of the country’s second-tier cities.

The coal industry has shed 890,000 jobs in the past two years, according to Ernan Cui, a Beijing-based analyst at researcher Gavekal Dragonomics. This is almost 15 percent of the total workforce in coal mining. In the same period, 550,000 workers were laid off in the steel industry. In January, the State Council took a decision to close a further 4,600 coal mines. While there is an urgent need to shift towards clean energy, these policies do nothing to protect workers by guaranteeing employment and creating new jobs in green industries. A socialist plan – rather than market chaos – is needed to solve these contradictions.

Manufacturing industry is also in the doldrums. Employment in the sector has declined every month for over two years. Dongguan, the huge factory city in Guangdong province, sums up the increasingly desperate straits facing migrant workers who make up the manufacturing labour force. In a speech at the end of January, Dongguan Mayor Yuan Baocheng said 500 foreign companies had pulled out of the city in 2015. The total number of factory closures in Dongguan in the past year was more than 4,000 according to The Beijing News. This was mostly in the electronics industry.

This deindustrialisation, with a corresponding effect of shops and restaurants closing down, has resulted in millions leaving the city. According to data from cellphone providers the number of users in Dongguan fell to 8 million last year from 12 million in 2007.

Workers are forced to stage protests and strikes, despite the more serious penalties – beatings, dismissal, imprisonment – as the authorities become more and more repressive. In the two months prior to the New Year holidays the number of strikes surged to 924, which compares with 1,378 strikes in the whole of 2014. This is not only in the manufacturing industry where most strikes occur.

Recent months have also seen a wave of strikes by nurses and hospital staff, especially on the issue of unequal short-term contracts. In January, nurses in the city of Chongqing and Huaibei in Anhui province went on strike to demand pay rises and equal employment status.

Even the Xinhua news agency warns 2016 “could be a very difficult year”. The explosive start to the year on Chinese and global stock markets leaves no doubt on that score. China’s stock markets have fallen by a further 20 percent in the first weeks of 2016, after falling 43 percent last summer. Global stock markets have also tumbled, showing it is not a purely Chinese phenomenon. Sinking oil and commodity prices, fears over China’s economy, currency turmoil, and the rise in global debt – these are the factors feeding the financial turbulence. These are all legacies of the global capitalist crisis that began in 2008 and has not relaxed its grip.

China’s growing debt load is one of the factors causing serious concern for global capitalism. This was a hot talking point at the Davos World Economic Forum in January, a meeting of the global elite. Even as China’s economy slows sharply, the debt is still growing fast – three times faster than GDP. China’s total debt stood at 282 percent of GDP in 2014 and may have risen to 346 percent of GDP in 2015. This is according to research from Michael Every, head of financial markets research Asia Pacific at Rabobank. In 2007, China’s debt-to-GDP ratio was 158 percent (McKinsey Global Institute). Some economists now describe China as “the People’s Republic of Debt”.

This could push the financial system to breaking point, forcing the Chinese regime to stage a costly rescue. The cost of a bailout could be truly gigantic, diverting resources that could otherwise be used for investment and to soften the economic pain for workers and the middle classes.

The government wants to avoid a financial crash by staging ‘hidden bailouts’ with the banks making new loans so that indebted companies can repay old loans. But this is reducing the efficiency of credit – the economy needs more and more credit to achieve the same, or lower, rates of growth. And this is the reason why China’s debt load keeps growing.

For the Chinese dictatorship the coming year can be the most tumultuous in decades. Increasing repression including the more frequent use of arrests, disappearances, kidnappings and forced ‘confessions’, as well as more serious political charges – such as ‘subversion’ which is punishable by life imprisonment – these are all symptoms of a regime preparing for social and political emergencies.

In the short-term this display of “shock and awe” may succeed in deterring the working class from engaging in struggle. The belief that economic distress is only ‘temporary’ may also play a part. But as the economic problems mount – and we socialists believe this is now inevitable – a mighty wave of mass struggle looms ahead.