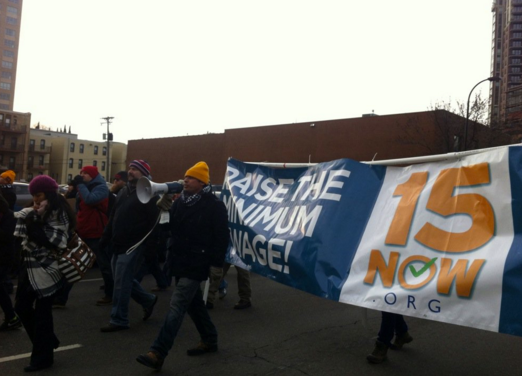 Minneapolis Mayor Betsy Hodges won a tight 2013 race promising to fight the racial and economic disparities plaguing the city. But two years later, instead of the mayor’s election slogan of “One Minneapolis,” the city’s political establishment presides over a “Tale of Two Cities.”

The Twin Cities are home to 17 Fortune 500 companies – the highest concentration in the country – yet also the worst racial inequities in the nation. A staggering 48% of black people in Minneapolis live in poverty, compared to 13% of white people. It’s become clear that wealthy corporations like US Bank and Target pull the strings at City Hall.

In the face of official inaction, workers of color have been at the forefront of struggle in Minneapolis this past year, linking the fight against police racism to demands for a $15 an hour minimum wage, paid sick days, and fair scheduling. A $15 an hour minimum wage is projected to result in a $900 million transfer of wealth from rich corporations to the pockets of low-wage workers in Minneapolis every year, most heavily impacting communities of color.

Despite a year of escalating protests and strikes for $15, as well as a poll showing 82% support for a $15 an hour minimum wage, the mayor and city council majority refuse to raise wages.

That’s why 15 Now is putting a $15 ballot initiative to voters this November, to place the decision into the hands of working people and those most affected by poverty wages. “The $15 ballot initiative is an opportunity to take the lead and fight against the racial and economic disparities tearing our city apart,” said Claire Thiele, a low-wage worker and 15 Now volunteer. “If the Council won’t act, we will.”

A Fight for Racial Justice

Our fight is greatly strengthened by our partnerships with Neighborhoods Organizing for Change (NOC), an organization rooted in the predominantly black North Minneapolis community, and Centro de Trabajadores Unidos en Lucha (CTUL), an organization dedicated to organizing low-wage workers. NOC and CTUL have led the way in mobilizing hundreds of low-wage workers to energetic mass actions and strikes for $15 and a wider workers’ rights, racial equity agenda.

The local chapters of Black Lives Matter and the NAACP, as well as the Minnesota Nurses Association, are also backing 15 Now’s ballot initiative, and more unions appear set to endorse. By tapping into widespread popular anger at City Hall, the fight for $15 is emerging as a key struggle against both racial and economic inequality in Minneapolis.

Socialist Alternative led the way in popularizing the demand for $15 in Minneapolis through our close race for City Council in 2013. That year in Seattle, where Kshama Sawant won international attention as an outspoken socialist elected to a major city council, we launched 15 Now and led the fight to make Seattle the first big city to pass $15 in June 2014.
Here in Minneapolis, we built on the momentum from our election successes to launch 15 Now in March 2014. While virtually no labor unions or big community groups initially backed $15, by the summer of 2015, through tenacious organizing, we’d won over important allies and most of the local labor movement.

Despite broad support, a victory for $15 will be an uphill fight. To understand the challenges we’ll face, we can look to lessons from #MPLSWorks, which formed last spring around a wider slate of demands for workers’ rights. The broad coalition included the most powerful labor and community nonprofits, groups that had been instrumental in electing the mayor and many city council members.

15 Now was fully involved in the #MPLSWorks effort to win sick days, fair scheduling, and an end to wage theft, but we argued against over-reliance on an insider lobbying strategy. Our warnings were borne out when the mayor retreated following the firestorm of opposition unleashed by big business.

As Socialist Alternative and 15 Now argued from the start, workers can’t rely on politicians who promise to support workers’ rights while also promising to promote business interests. Going forward, instead of orienting our fight toward lobbying City Hall, we aim to build a powerful, independent movement that can challenge the corporate establishment head-on.

Big businesses will unleash floods of money to protect their profits and use the corporate media to propagate doomsday claims that $15 would tank the economy and destroy jobs. To win, we must transform the latent support for $15 into a broad, fighting movement.

We’re building up a massive base of volunteers to prepare a signature collection campaign this spring to get $15 on the ballot. We’ll organize big rallies and protests targeting City Hall and low-wage employers, linking up with low-wage worker strikes for a $15 minimum wage. Through deep community outreach, we can counter the lies and fear tactics wielded by big business.