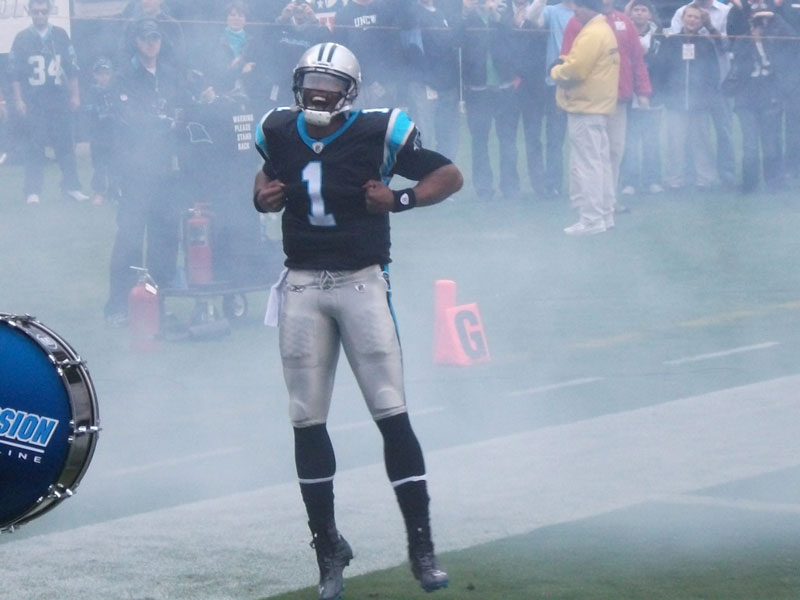 Whether it’s racial slurs in the locker room or media narratives playing into old stereotypes, sports shed a spotlight on the racism that pervades our society. This year’s Super Bowl put racism, and resistance to it, front and center. After losing the biggest game of his career, Carolina Panthers quarterback Cam Newton was given no slack by the media which attacked him for being black, competitive, and confident. To counter this impossible double standard for black players, we ought to point the blame at the perpetrators and not the victims.

After Cam Newton left the postgame press conference, a barrage of attacks came his way from all corners of the sports world. CBS Sports called him “pouty” and Doug Gottlieb shrieked and shouted (2:53 mark) on his show about Newton’s exit. Bill Romanowski, a former linebacker in the NFL, tweeted, “You will never last in the NFL with that attitude. The world doesn’t revolve around you, boy!”

Throughout the season, Cam faced criticism for his celebrations during games including from Seahawks and Titans fans who penned open letters amounting to “Think of the Children!” confessionals. The media was quick to pick up on the complaints of suggestive dancing. In contrast, Packers quarterback Aaron Rodgers has had his signature “champion belt” celebratory move adopted by State Farm insurance commercials, despite the suggestive qualities of moving his hands over his pelvis. It’s not the content of a quarterback’s celebratory dancing that seems to be of issue, but rather the color of that quarterback’s skin that makes a move suggestive. The paternalism and implicit racism of describing Cam Newton as “immature” and “unsportsmanlike” highlights the contradictory standards that black players, especially black quarterbacks, are held to that white players are not.

Compare Cam Newton’s treatment to when Peyton Manning left the field early following Super Bowl 44 where he and the Indianapolis Colts lost to the New Orleans Saints: Manning wasn’t met with any comparable level of criticism of being “unsportsmanlike” as Cam Newton has. Cam Newton’s dancing has nothing to do with it; his skin color does.

There is a long history of attacking black athletes for being demonstrative: from the turn of the century boxer Jack Johnson, through the 1968 Olympians John Carlos and Tommy Smith, to the present. Today, with the 24-hour news cycle and many sports centric news channels, publications, and shows, this massive popularity opens these attacks on Cam Newton to a huge audience. Just last season, the media targeted Seattle Seahawk Richard Sherman after he boasted about playing an excellent game. Despite having a degree from Stanford University, he was called a “thug” and dismissed as a role model for children. Marshawn Lynch was derided for giving the media the cold shoulder in numerous press conferences. The consistent element in this history is the color of the castigated players’ skin, and not the quality of their behaviors.

As a “black quarterback” Cam Newton faces additional scrutiny, pressure, and discrimination. Despite the fact that there has consistently been at least one black quarterback in the NFL since 1968, the quarterback position is contested ground for black athletes. This is due to the significance of the position as a representative for managerial masculinity on the field and as the commercial face of NFL franchises. The quarterback is, by extension, the surrogate for the team owners and corporate partners on the field because of the aspects for being the “field general,” the one who scores the points, makes the calls, and leads the offensive side of the ball. All of these are important components in constructing white supremacist masculinity in sports and serving as a foil to the racist “dumb, instinctive athlete” trope black players are cast into. Peyton Manning’s nickname “The Sheriff” is then a very fitting title for the quarterback position as a whole. So when Cam Newton dances in celebration, refuses to perform for the media at a press conference, and defends himself after the fact, he’s not just challenging the standard white corporate expectations of NFL players but the entire foundation of field and franchise leadership on the field and in the stores. And he’s challenging that idea by pointing out that a black quarterback is threatening to some people. That is a kind of rebuke that the billionaire class invested in sports cannot tolerate.

Racism is bound to the exploitative system of capitalism by a thousand threads on campuses, in the workplace, and on the field. Is it any wonder why the NFL would be willing to sacrifice Cam Newton to an unrelenting media in order to spare the reputation of one of their greatest commercial faces in history? How much money does Peyton Manning bring into the media giants and the NFL in ticket sales, advertising money from Papa John’s, Nationwide, etc? Because players like Cam Newton, Richard Sherman, et al. buck the trend of playing the NFL media game the way the commissioner, the franchise owners, and media oligarchs want them to, they’re subject to attack. But because they’re black, the attacks often insult their maturity, sportsmanship, and strategic skill, all of which are general dog whistle racist codes alluding to the notion that black people are like children or are incapable of managerial leadership skills. These notions are in stark contrast to the reality of black athletes who lead by defying the system instead of upholding it.

An example of this is the Mizzou football players strike. Several months ago, Missouri University players went on strike in protest of racism on campus. The strike was part of a movement that forced out the university president. Despite initially being praised for standing up, the media narrative on their strike is turning back to the traditional attacks suffered by being black while protesting. The Mizzou football players’ strike shows the impact that the emerging black freedom mood through Black Lives Matter has on sports players.

Despite being told that “sports and politics don’t mix,” for players and fans it’s an unavoidable combination. But who controls what is acceptable to discuss in sports is a question tied to the racist portrayals of stellar players. Because we live in a society where the billionaire class controls the commanding heights of the economy, runs the political system, and manages the sports we watch, fans and players alike suffer for  the profit of the 1%. When Cam Newton gets castigated for celebrating, the fans don’t get to decide if Peyton Manning’s potential sexual assault cover up or the brain trauma epidemic is more important to focus on.

The decisions over the NFL’s priorities and values are set by the 1% owners, not the 99% of fans. To truly address the racism inherent in sports leagues, fans should replicate and improve the model of the Green Bay Packers. The fans and players should own and manage the teams they love instead of being owned by billionaires just in it for the money. Fans and players together can reorganize league priorities to emphasize antiracist messaging as well as focusing on stamping out homophobia, domestic abuse, and protecting the brains of players. This would require mass movements and the organizing of Black Lives Matter activists, sports fans, and players to fundamentally change how our sports, and society, are run.