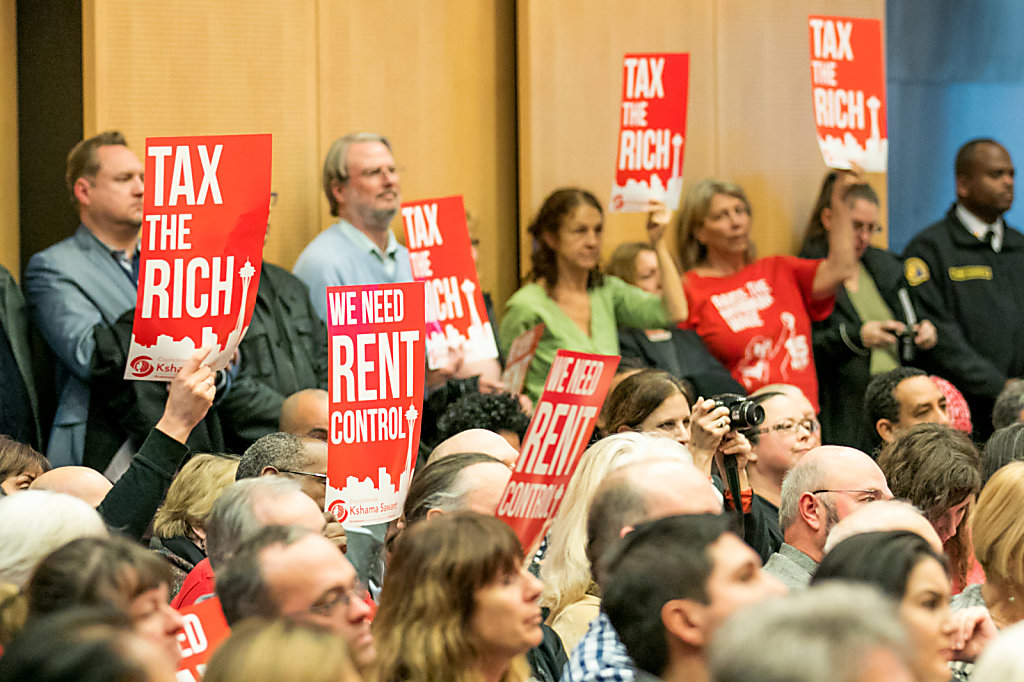 Seattle City Hall was packed with 400 people on Monday, January 4th, for the inauguration of the new city council. Cheers rang out as some of the councilmembers used their speeches to highlight the need to tackle the affordable housing crisis, homelessness and police brutality.

But the loudest cheers were reserved for Councilmember Kshama Sawant.

Hundreds of thousands of dollars in corporate cash were spent by the corporate establishment, in their attempt to unseat Seattle’s socialist city councilmember. But they failed. Kshama Sawant was re-elected with a decisive 56% of the vote and the overwhelming support of working class, young people and people of color.

Each councilmember chooses who will swear them in. Kshama was sworn in by Sahro Farah and Osman Osman, two courageous tenants of a slumlord who attempted to raise rents by over 100% and was forced to back down in the face of community outrage. Sahro and Osman are themselves inspiring examples of what is possible when we get organized.

It was clear from the inauguration speeches how much Kshama’s two years in office have shifted the debate (and rhetoric) to the left. Yet, Kshama’s speech stood out in its call for working people to get organized and fight for a better world, a socialist world.

Read the full text of Kshama’s speech below, or watch on Seattle Channel (starting at 16:40 in the video).

Across the U.S. and globally, young people and workers are rejecting corporate politics and capitalism. They are fed up with the deep inequality, brutal racism, and environmental destruction under this system.

Nationally, Bernie Sanders is running a trailblazing campaign as a Democratic Socialist, calling for a political revolution against the billionaire class.

“What is socialism?” Millions are asking.

A socialist society would put people before profits, the environment before big oil. A society in which the resources of the major corporations are taken into democratic public ownership, rationally planned for the needs of society as a whole.

What we’ve built in Seattle over the last two years is an example of how working people can organize and fight back against the corporate establishment.

We have not won everything. But as our victory on the $15/hour minimum wage showed: if we fight, we can win.

The political system in this country, and in this city, is broken. The same old, business-as-usual politics cannot fix it.

I take the dangers of Republican right-wing politics very seriously. However, they are only one part of the problem.

Over decades, Seattle has been dominated by a Democratic Party establishment which has presided over an ever-growing housing crisis in this city, increasing income inequality, the largest gender pay gap in the country, and an unaccountable police force.

It is time for something new. Working people need our own political party that unambiguously fights for our needs.

My standing here today is the living proof that, even in the face of hundreds of thousands of dollars of corporate cash, we can elect working class representatives. Thousands of people contributed 10 dollars, 20, 50, and together we set a new record for fundraising in a Seattle City Council race, without taking a penny in corporate money.

Seattle will continue to set a powerful example of the kind of politics that are needed and possible.

In this beautiful city, blighted by income and racial inequality, 2016 should be the year we take on the greed of the few, to meet the needs of the many.

We cannot wait around for the state to act, or be held back by an antiquated, 1930s Washington State Supreme Court decision.

Seattle can and must pass a millionaire’s tax!

We need to tax the rich to free up the resources needed for education, transit, and human services!

The US is the only country in the industrialized world that denies workers paid parental leave, an essential step towards gender equality. We need to pass legislation this year providing all Seattle workers a minimum of 12 weeks of paid family leave.

It will require bold social measures like rent control and developing a public alternative to the private housing market by building thousands of city-owned housing units.

We need to root out police brutality and racial profiling – to put ‘Black Lives Matter’ into practice. This will require a democratically elected community oversight board with full powers over the Police Department, to set policy and subpoena officers.

We should invest in education and living wage jobs, not a new youth jail!

Seattle is on its way to a $15 minimum wage. 3 days ago, the minimum wage for workers at McDonald’s and other big corporations went up to $13. That’s good — but not enough. These same workers need fair scheduling legislation to put an end to abusive scheduling practices.

I appeal to all working people who are looking to resist the agenda of big business: get organized.

Join me and Socialist Alternative in our struggle for economic and social justice.

Let me end with the words of the great fighter and radical, Dr. Martin Luther King Jr, ‘The evils of capitalism are as real as the evils of militarism and evils of racism.’ He also said, ‘Call it democracy, or call it democratic socialism, but there must be a better distribution of wealth within this country for all God’s children.’

Sisters and brothers, now is the time to join our movement to create a better world.

Building the Fight for Rent Control in Seattle

Kshama Sawant: Why I Settled the Ethics Complaint On My Support for Tax Amazon