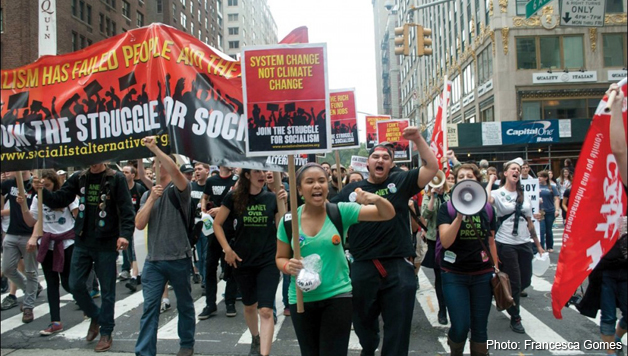 A specter is haunting the US presidential election – the specter of socialism. Before he even opened up his mouth to speak at the first Democratic Party presidential debate on October 13, Bernie Sanders’ impact on the presidential race was clear.

The debate marked another step forward in the re-emergence of socialist ideas as a legitimate force in US politics. Google reported that Sanders was the most searched candidate online throughout the debate. Merriam Webster reported a spike in searches for “socialism”.

The most important thing about the Sanders campaign is the enthusiasm it is building for the idea of a political revolution against the billionaire class and the popularizing of socialism. We in Socialist Alternative have argued that Sanders needs to draw as sharp a contrast as possible with Hillary Clinton who is now pretending to be a progressive and trying to hide her long history of service to corporate interests.

The Democratic Party is tied by a thousands threads to the billionaire class. It is increasingly urgent to take steps through and around Sanders’ campaign to create a new political force that will serve the interests of the 99% and therefore must be independent of the Democrats.

The article below by Kshama Sawant, Seattle’s newly re-elected socialist city councilmember, is a contribution to the necessary discussion of how we achieve democratic socialist change. We want to live in a society where ordinary people have full control over the key decisions that affect their lives. A society based on social justice where discrimination based on gender and race has been relegated to the history books. A society based on full employment where all workers receive a living wage; with high quality and free healthcare for everyone; free education from kindergarten to college; decent pensions and good housing accessible for all. A society where communities are based on solidarity and cooperation rather than plagued with fear and alienation. A society where we have ended the threat of climate catastrophe by rebuilding our infrastructure on a green basis and agreed to leave the remaining fossil fuels permanently in the ground. These democratic socialist changes are both necessary and achievable.

Capitalism Has Failed the 99%

However, as Bernie Sanders points out, we currently live in a society dominated by the oligarchy of the super-rich. Income inequality and exploitation are driving millions into desperation and bitterness. That’s why his call for a “political revolution” against the billionaire class has had such an electric effect on hundreds of thousands of young and working people.

At the first Democratic presidential debate, Sanders declared: “what democratic socialism is about is saying that it is immoral and wrong that the top one-tenth of 1 percent in this country…own almost as much wealth as the bottom 90 percent.” Sanders is giving voice to the enormous desire for change after a decade of economic crisis where millions lost their jobs and homes and the “recovery” has overwhelmingly benefited the 1%. There is deep anger because the political process is completely dominated by corporate interests; cuts to social programs and attacks on the rights of workers are endless; structural racism and sexism remain entrenched; and because no decisive measures are being taken to address global warming.

Underlying all of this is a diseased and decaying social system. But how does one take on the “casino capitalist” process, as Sanders describes it? And how does one create a society where all people do well, not just a handful of billionaires?

Poll after poll show that people under 30 support “socialism” and “capitalism” in roughly equal numbers. The increased acceptance of socialism is the product of the unmasking of capitalism over the past eight years, during and after the “great recession”, and the new wave of social struggle that has broken out nationally and internationally. From the Wisconsin uprising in 2011, to Occupy, to the Fight for $15 to Black Lives Matter, we have seen working people, young people and people of color standing up against the rule of the 1%. Sanders has correctly stressed the role of mass movements in changing society.

In the wake of my election in 2013 as Seattle’s first socialist city councilmember in 100 years, we built a grassroots campaign with union support and won a citywide $15/hr minimum wage, the first in the country and the biggest victory for working people in a very long time. This helped inspire activists in other cities, including San Francisco and Los Angeles, to fight and win $15. We are currently leading the fight for rent control and affordable housing in Seattle which also has major national significance. The social power of working people is the key force that can galvanize all the strands of struggle and can push back decisively against the corporate agenda and in favor of the needs of ordinary people.

But social struggle needs to be combined with building a new political force for the 99%. Bernie Sanders’ campaign, which raised $28 million in the past three months and has refused corporate donations, shows the potential for independent working class politics. This is ultimately incompatible with the framework of the Democratic Party which is dominated by corporate money and a neo-liberal apparatus. We need an independent mass party of and for working class people to fight for their own interests here and now, linking it to a socialist transformation of society.

Breaking the Stranglehold of Wall Street

A government acting in the interests of the 99% would, as Sanders has advocated, enact progressive taxation to create a massive jobs program, rebuilding the nation’s infrastructure on green lines.

But even to carry through these basic measures means completely breaking the stranglehold of Wall Street and the biggest corporations over society. This requires more than breaking up the big banks or restoring the Glass-Steagall Act, although such measures would certainly be positive steps. It would entail bringing the big banks into public ownership, along with the big energy companies and other key parts of the economy. Why is this necessary? Consider that around 90 companies are responsible for around two thirds of carbon emission in human history. They have wielded an effective veto on any serious attempt to end global warming.

Of course entrenched corporate interests will resist the fundamental change that is necessary and they have massive resources. This is why working people need to rebuild a fighting labor movement which stands in solidarity with all those oppressed under this system. We need a powerful mass movement in the streets, workplaces and campuses with an independent political voice in the halls of power.

And for such a movement to succeed it must be linked to the movements of working people and young people across the world. Capitalism is a global system in decline. This is expressed not just in the climate crisis but in the collapse of societies across the Middle East and North Africa after decades of imperialist intervention, leading to the biggest wave of refugees ever seen in history.

Global crisis must be faced through global solidarity. Creating a viable socialist future for the people of the planet based on the utmost democratic participation of ordinary people is the paramount challenge of our era. Join the socialists, build Socialist Alternative.