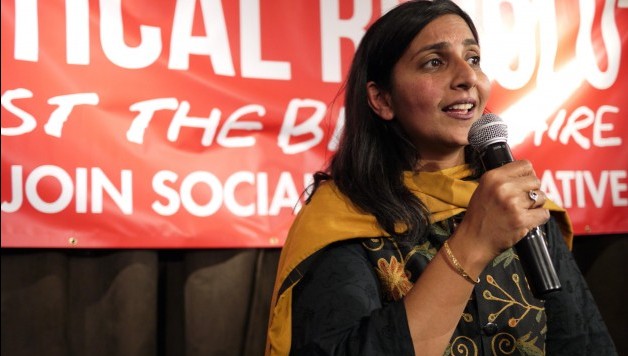 After campaigning against an onslaught of corporate cash (over $200,000 donated directly to a corporate candidate or to Independent Expenditures or PACs), on November 3, 2015 Socialist Alternative Seattle City Councilmember Kshama Sawant was re-elected. Below  is a video and transcript of her speech to supporters after the results were announced.

I was going to ask how everyone is feeling, but I think I have an idea.

Let’s keep in mind this is the first ballot drop. We fully expect our numbers to go up every single day.

In November 2013, the Seattle Times, in its endless wisdom, said about me, “she alienates others with bold assertions.” The same article went on to say, “I kind of love it when political outsiders think they can sweep in overnight and change the status quo. The verdict is still on whether Kshama Sawant can follow through with her own campaign pledges.”

The verdict is in. It was precisely our audacity to challenge big business that attracted working people to our first campaign for city council. Working people are fed up with corporate politics. Now, not only have we fulfilled our pledges from 2013 we have accomplished something historic. We have had an open socialist reelected.

This victory, this vote, is a strong victory for all working class people, for the socialist movement, and for independent working class politics. It’s a sharp reminder that the arrogant political establishment that runs Seattle is increasingly out of touch with the deep anger and frustration of so many working class and middle class Seattleites who are struggling to get by in an increasingly unaffordable city. The complacent media pundits were wrong. Socialist politics are here to stay, and will be a growing force in Seattle, nationally, and internationally.

My sisters and brothers, these conditions are not unique to Seattle. There is a huge chasm of economic, wealth, and racial inequality opening throughout the nation.

Most of us have had six years of a joyless so called recovery. The political establishment is totally discredited and we have a dysfunctional and broken two party system that is drowning in corporate cash. In the face of all this opposition we won the fight for 15 in Seattle and now we’ve become a national movement. When we were elected first in 2013 it was considered a fluke, but now we have won despite all the hundreds of thousands of dollars spent against us.

But it’s not just in Seattle. Nationally Bernie Sanders campaign has electrified the working class around the nation. And our reelection victory along with the huge enthusiasm for Bernie Sanders opens a new chapter for the American socialist movement, a movement that consistently champions the interests of the working class and all those oppressed by capitalism–starting with fighting for immediate improvements in living standards such as 15 dollars, taxing the rich, affordable housing, a dramatic expansion of public transit and human services, and a renewable energy revolution. All of this as part of a fundamental democratic and socialist reorganization of society on rational lines to meet needs human need, rather than what we have today which is a subordination of social needs to the demands of private profit.

The coming battle between Hillary Clinton and Bernie Sanders will clarify to tens of thousands that the Democratic Party is not a tool that can be used to fight for the interests of the working class. While many genuine social justice minded people identify as Democrats, the party is largely dominated by a pro-capitalist establishment. Working people and the left need our own political party that is one hundred percent on our side, for the millions, not the millionaires.

We have shown how working people can stand up to the billionaire class and their establishment and we have shown how we can win. Let the number one message from this reelection be unambiguous: we can and must rely on 100 percent on our own strength as working people instead trying to serve the interests of workers and big business at the same time because you can’t do that. By organizing powerful grassroots movements that can mobilize support for far reaching demands that inspire workers and the youth to take action, we have changed and we will continue to change the balance of power between the ruling elite and the 99%.

We have shattered the myth that there is nothing progressive candidates can do against the avalanche of corporate money. We have shown that it is entirely possible, if there is the political will, to refuse donations from big corporations and instead base ourselves on the support of working people and win. That is why we have won, and successfully I might add, not just independent of corporate cash but also independent of the two political parties that represent that corporate cash.

Here in Seattle, as in most urban areas across this country, the political party of big business is the Democratic party. We ran an independent working class campaign meaning independent of the Democratic party, and we showed not only is it possible, but we demonstrated that it is absolutely the only way that we can build the power and strength of working people in the political arena.

I know people will be looking at the other races. I want to take the example of the race between Tim Burgess and Jon grant. Does anybody here think that Tim Burgess won tonight because he has great ideas to represent the working class? Tim Burgess is not [invincible], corporate politicians like him are not [invincible], but the reason they won and the reason they win is because they have corporate PAC money. They spent hundreds of thousands of dollars from investment bankers, from the real estate industry, from every anti-union business in town. So what’s the lesson here?

We have succeeded in uniting socialists, democrats, environmentalists, the LGBTQ community, the black community, Black Lives Matter activists, and other community activists around this campaign. Let’s make inauguration day in early January. Let’s make that a major rally in city hall. Let’s put the corporate politicians in city hall on notice. We are demanding a strong bill of rights for tenants including rent control, a billion dollars in public bonds to build thousands of units in affordable housing. How does 12 weeks paid parental leave for all workers sound to you? And a world class mass transit system paid for by a millionaires’ tax. Let’s put the corporate politicians on notice by declaring that black lives matter and that we will put an end to police brutality and racism, that we will build our movement to build democratically elected civilians oversight boards with full oversight power over the SPD. There’s another date you all should remember. On November 14 at 7:00 at the Labor Temple we are going to have a rally for socialism. I hope everybody got a leaflet tonight. If you’re excited by tonight your task is by no means over, it’s just beginning. Then on February 27 we will have a conference hosted by Socialist Alternative on building a movement against the billionaire class.

Sisters and brothers, we have so much to look forward to but we have already won so much just by having on socialist in city hall. In the coming years we need to seriously build on this. We need to elect more socialists in city hall and nationwide, along with independent working class representatives. The future is on our side. Let’s seize the time. Get organized. Join us. Solidarity.