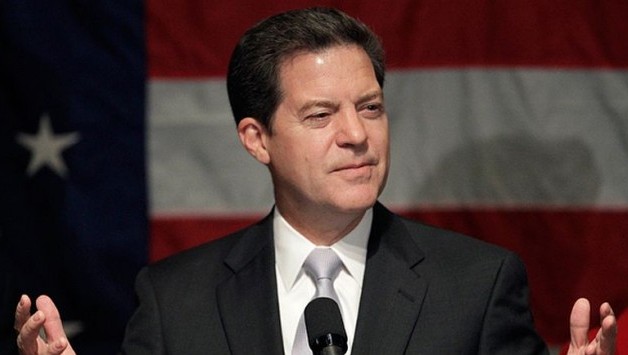 Kansas Republican Governor Sam Brownback and his ultra-conservative state legislature have devastated the Kansas economy and the public school system, lead the war on women, immigrants, attacked voting rights and furthered the degradation of workers rights in a state that has been a “right to work” state since 1960. Rebuilding a fighting left, based on bold demands like a $15/hour minimum wage and ending Right to Work legislation, is crucial to challenging Brownback’s corporate agenda. Brownback has a complete disregard for workers, women, immigrants, people of color, students, children, the elderly, the disabled, the impoverished and pretty much anyone who is not unreasonably wealthy like his primary corporate masters, Charles and David Koch and he must be stopped.

The creation of a crisis

Brownback’s 2012 tax cuts put the state’s economy into a freefall, eliminating  income taxes for more than 330,000 businesses and the top income tax bracket. Kansas is facing a $400 million dollar shortfall and a loss of $1.1 billion in total revenue, even after making the largest cuts to school funding in Kansas history and cutting teachers’ and government workers’ pensions. The situation has deteriorated so much that even the state’s credit rating has been downgraded.

A budget bill was passed at 4 a.m. on Friday, June 5th but even some supporters of the bill say it doesn’t address the core issues of the problem, mainly the tax cuts. The legislature failed to include a roll-back of the 2012 tax breaks because of Brownback’s thuggish threats to veto the bill and make massive cuts to state’s schools, universities, and disability services. While Brownback fights to eliminate taxes for corporations, he’s more than happy to tax poor people by increasing sales tax 6.15% to 6.5%. The legislature was only able to pass the budget by threatening wholesale layoffs of public sector employees during a government shutdown.

Continuing the attack on labor, Brownback urged the state legislature to pass a bill that was modeled after Wisconsin’s union busting bill of 2010. The legislature had also proposed a bill that would prohibit government agencies and school districts from collecting union dues through payroll deductions. Both bills had been kicked back and forth between both houses for the first four months of 2015 and have both been shelved until the next legislative session that will start in January of 2016.

War on women and the poor

When it comes to social issues, Brownback has one of the worst records of all the current governors. He vowed once he took office in 2011 to sign any anti-abortion bill, continuing his war on women’s reproductive rights that he crusaded for as a U.S. Senator. One bill that he signed in April of this year banned the D and E procedure that medical professionals consider the safest procedure for some women after 14 weeks. While the bill has since been blocked by a judge, there is no doubt that similar attacks will come down in the future.

Brownback has also declared war on public schools, passing the largest cuts to education in Kansas’ history which has resulted in broad layoffs for  teachers, paraprofessionals, teachers assistants, and other support staff, and increased class sizes. The cuts have been so drastic that the Kansas Supreme Court has ruled them unconstitutional because the state doesn’t meet the minimum amount of spending per student that is required by state law. The Kansas Supreme Court ruled that Brownback’s cuts went below acceptable minimum spending per student. In response, the right wing attempted to defund the state’s judicial system to eliminate opposition.

Along with refusing federal money to expand Medicaid, the legislature, again at the urging of Brownback, has made it incredibly difficult for anyone applying for medicaid to be approved, especially if the individual does not have a dependent. They also passed a bill that restricts welfare recipients from using their food stamps and other subsidies, absurdly claiming recipients waste their benefits on liquor, jewelry, and casinos. Kansas is now the only state to arbitrarily limit welfare recipients’ cash withdrawals to only $25 a day.

Brownback’s policies are wildly unpopular among Kansans, his approval rating as of February was around 35%. Even more than 100 former republican legislators signed a letter before the November election endorsing Brownback’s democratic challenger, Paul Davis. Brownback has no mandate to carry out his right wing attacks. The reasons why he was able to slither through the election are that there was only 42% voter turnout while at the same time 15-20 thousand first time voters were denied the right to vote because Kansas also has one of the strictest voter ID laws in the country.

Is the Democratic Party an alternative?

The Democratic Party in Kansas has been completely unable to offer any meaningful resistance to Brownback’s attacks. Democrats control 9 out of the 40 seats in the Kansas Senate and only 28 of the 125 house seats. So, even if they did want to combat Brownback’s regressive policies their actions would be little more than symbolic. But, still they don’t even attempt to offer an alternative to the right-wing, pro-corporate agenda. Instead of boldly rejecting Brownback’s policies, the Democrats run towards the center, which forces them into a position that accepts many of the right-wing arguments Brownback puts forward.

In the last election, Brownback’s Democratic Party challenger, Paul Davis was continually vague about his record and what he would do about rolling back Brownback’s policies if elected. According to a Kansas City Star article from October 2014, “On welfare, [Democratic challenger] Davis won’t say whether he would reverse Brownback policies that cut thousands off of public-assistance rolls.” By failing to boldly reject Brownback’s right-wing policies, the Kansas Democratic Party corner’s itself into tacitly accepting the logic of neoliberalism, which in turn makes it impossible to energize those most affected by Brownback’s policies, workers, students, women and people of color, into a coherent challenge.

Poll after poll suggests that public sentiment has shift to the left of the mainstream political establishment, especially on economic issues, with a majority of the country now supporting raising minimum wage, taxing the rich, and unions. There is mass frustration with the “billionaire class” who use their unlimited resources to purchase politicians and favorable policy. The problem is there is not a force which can channel this frustration into a credible challenge to the Koch Brothers.

Kansas has a proud history of radicalism. Before the Civil War, abolitionists like John Brown fought pro-slavery mercenaries, in a bloody struggle over the future of Kansas. Around the turn of the century, the Populist Party controlled the state House of Representatives, and the governor’s seat. The Appeal to Reason, one of the most widely circulated socialist newspapers in the country, was produced in Girard Kansas. In 1954, African Americans in Topeka struck one of the first blows against Jim Crow. Our legacy is far from the Brownback’s and Koch Brothers that dominate Kansas today.

Socialist Alternative calls for building powerful movements now on the important issues facing working people. History shows the tremendous power working people have when they organize collectively, even in the heartland of the Koch Brothers. Socialists fight tooth and nail to help movements win victories on concrete issues, while connecting these struggles to the need for changing society altogether. Fundamentally, we know as long as the Koch Brothers can buy favorable policies, and control the commanding heights of the economy, there will always be another Brownback, and the vicious assaults on working people will continue.

Join Socialist Alternative today in Kansas, and help build a working-class resistance against right-wing cuts here in Kansas and around the country.