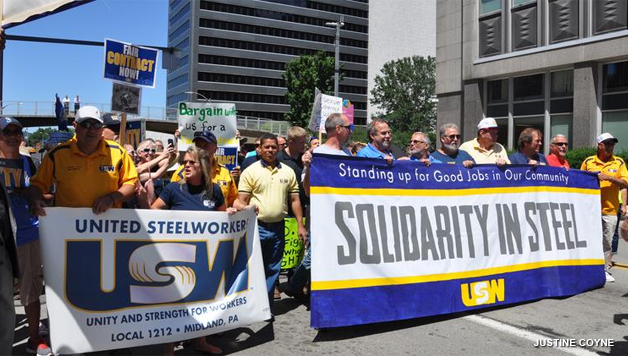 On August 14, Allegheny Technologies Incorporated (ATI), one of the world’s largest specialty metal manufacturing companies, announced that they had decided to lock out over 2,200 workers at their production facilities in six states. The workers in Pennsylvania, Ohio, New York, Connecticut, Massachusetts, and Oregon are represented by the United Steelworkers (USW) labor union. The USW’s bargaining committee had been engaged in heated negotiations with the management of ATI for much of the year leading up to the lockout, with the aim of replacing the contract that expired June 30.

The USW has had a simple, consistent, demand: they are seeking the same terms that were within the contract that expired. ATI, on the other hand, presented the USW with a “last, best, and final” offer – filled with concessions which the USW call “draconian and unnecessary” – and left the negotiation table, demanding the offer’s ratification by the union membership. Within the full text of the offer are major changes to health care coverage, pensions, wages, and even an attempt to redefine the workday to a twelve-hour day – destroying a fundamental right that U.S. workers won almost 80 years ago.

At present, the jobs in the plants that used to be done by USW members are done by replacement workers – scabs – from Strom Engineering, a staffing firm that commonly boasts about its work in strikebreaking. Meanwhile, the USW members are present outside of the facilities, walking informational picket lines to make their voices heard – and trying to put pressure on management.

The locked-out workers at ATI are fighting not just for themselves, but for all their fellow Steelworkers. On September 1, contracts expired between the USW and U.S. Steel and ArcelorMittal – representing 13,000 and 17,000 workers respectively. Many feel that these companies are using the lockout at ATI as a bellwether to see if intimidation can work against the union and its members. If ATI is successful in forcing major concessions from the USW, then it is likely that these other major corporations could use similar tactics to force concessions during their contract negotiations.