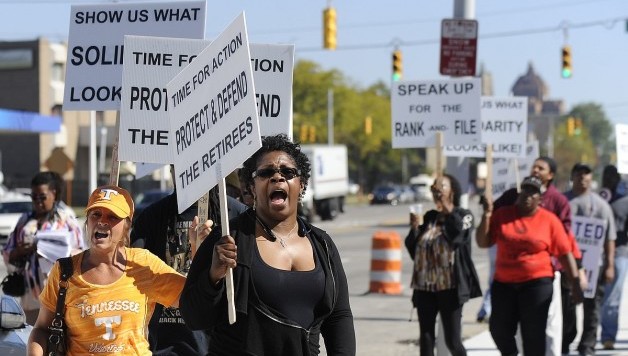 Update: The United Auto Workers (UAW) tops and Fiat Chrysler bosses have reached a new agreement on a deal to propose to the UAW members who rejected the first weak agreement. Workers should vote “No!” again and prepare for serious solid strike action.

The new agreement still entrenches the two-tier system that has undermined workers’ power and driven wages down for newer hires. The cost-of-living adjustment (COLA), once a key component ensuring workers’ stability, has been eliminated. As world capitalism continues to encounter problems, COLA is necessary now more than ever.

To try to push this deal on workers, the UAW tops have made an undemocratic maneuver in not allowing workers to vote at their plants. This means workers have to travel to a union hall after work or during breaks (which are often worked through). The “no” vote on the last contract was organized primarily on the shop floor, and the union leaders are trying to take this away from rebellious workers.

The below article from earlier this month on the first deal still contains important analysis and an overall strategy to fight back and win.

Auto workers at Fiat Chrysler factories across the country stood up and rejected the weak “two tier” contract negotiated between their UAW union leaders and management. In recent years and decades, manufacturing jobs have been shipped out of the country or transformed into low-wage work as union leaders have unfortunately either stood by and watched or colluded with management in enforcing concessions and decline. This needs to stop, and the brave stance of workers at Fiat Chrysler can be the beginning of a desperately-needed fight back by manufacturing workers.

Auto workers were at the center of the mid-1930s labor uprising that saw mass unionization and successful struggles for not only wage increases but rights on the job, time off and the creation of significant government programs like Social Security. In the titanic labor struggles of the 1970s, black auto workers came to the forefront with militant action, demands for equal treatment and assertion of anti-capitalist ideas. Today, the auto workers are at a crossroads. According to Bloomberg Business, UAW workers made only 54% of cars and trucks in the US in 2013 compared with 85% of cars and trucks built in 1999.

A turning point that struck a blow at good union jobs was the “free trade” NAFTA legislation that took effect in early 1994. This deal, pushed and signed by the Democratic Clinton administration, led to an exodus of good union jobs as corporations were given more of a free hand to search for the cheapest labor possible abroad. More recently, foreign auto manufacturers have moved some production to the US, mainly to the low-wage South. This situation shows – again – the fact that the labor movement needs to get serious about organizing in the South to stop the wage stagnation and race to the bottom in workplace rights and benefits.

The decline of good union jobs in the auto industry has destroyed entire communities and cities in the Midwest, particularly in Michigan. We’ve seen displacement, poverty and safety concerns skyrocket not only in Detroit but also in places like Saginaw and Flint. This has disproportionately affected black workers in the region.

Two Tiers and Crisis of Leadership

The UAW leadership was once seen as crucial to US politics and had a form of “moral authority” in the nation. The influx into the UAW and other industrial unions in the 1930s was a heroic rising of the American working class movement that sent shock waves through the world. For example there were the “sit-down” strikes beginning in Flint in 1936. These were plant occupations by auto workers who held the machinery of production hostage until their demands were met.

The auto worker in the 1950s was a symbol of the American Dream of working hard, buying a home and sending your kids to college. The UAW leadership was at the front of Civil Rights marches with Martin Luther King in the 1960s. Yet in 2012, Republicans went further than the Democrats in attacking auto workers by pushing through anti-union “right to work” laws in the Michigan heartland of the UAW. While the previous year had seen a mass uprising of tens of thousands against anti-union laws in Wisconsin’s public sector, the UAW leaders couldn’t pull together more than a few hundred angry and dejected workers. This graphically illustrates the authority that the union lost by helping to oversee the decline in good jobs and accepting the logic that the union’s key task was to help the American auto bosses maintain profitability against foreign competition.

The UAW leadership sits on strike fund of over a billion dollars. You read that right: “billion” with a “b”. Yet there hasn’t been a prolonged strike in decades. The leadership is largely out of touch with union members, spending more time getting cozy with management and with salaries more like their opponents across the bargaining table than the workers they’re supposed to represent. In this context of plant closings, concessionary leadership and assault on union power, auto companies pushed a “two tier” system of decreased wages, rights and benefits for new hires. This is at the center of the dispute at Fiat Chrysler.

While the contract negotiated and rejected had some wage increases, it was weak on health care, and – most importantly – it strengthened the two tier system. As Labor Notes reported, “Probably the top reason workers voted no was indignation that the agreement broke the union’s longstanding promise to cap the lower-paid tier at 25 percent of the workforce this fall. Since 45 percent of Chrysler workers are in Tier 2, many expected a raise to $28 an hour. With no cap, it’s only a matter of time before there’s no first tier left.

Auto CEOs, including at Fiat Chrysler, have made it clear that they see this as a stepping stone to a “one tier” low-wage industry as the higher-paid workers retire or are pushed out of their jobs. This process needs to be stopped in its tracks.

The opposition to the deal by workers was an energetic struggle that had features of a movement. Workers developed new facebook groups where they discussed how to argue against the contract. They organized to stop any potential fraud in the vote by taking pictures of their ballots. News of “No!” votes in plants across state lines led to mass discussion in other factories still voting. This momentum needs to be built upon. Workers’ leaders who helped organize the resounding “No!” vote should link up, formulate demands and put pressure on the union officials at the negotiating table. Demands should include an end to the two tier system, secure benefits and rights on the job, linked to a plan to organize the South and transform the union back into the fighting force it once was.

Coordinated discussion about contract demands should also be linked to a plan for action to win improvements. Workers should organize “work to rule” campaigns to enforce the previous contract strictly and build power from the bottom up while also discussing how further workplace action and the credible threat of a strike can be built. The truth is that it will take a massive, determined and thoroughly prepared strike to end the two tier system. This means building mass community support and plant based, democratically elected strike committees.

But to be clear: we do not think that rebuilding the union’s strength is going to be a straightforward or easy task. This is partly because of the enormous weakening of the union’s position compared to the past and the clear challenges of organizing the non-union plants in the South. The traditions of the past will have to be rebuilt almost from scratch and a new leadership forged from the rank and file. The revolt in Chrysler, however, is a very promising beginning.

To reverse the labor movement’s decline – in the auto industry and beyond – we need to return to struggle against the big companies driving the race to the bottom. When non-union workers see the labor movement waging inspiring battles and winning real victories, they will be far more motivated to join the unions. As the defeat of the UAW organizing drive at the Tennessee VW plant in 2014 showed, most workers won’t be motivated to join a union based on concessions and “cooperation” with corporate bosses. We need leaders that have a strategy to win or are pushed aside by a workers’ movement that asserts the need for democratic structures. This includes the ability to recall officials who should also be paid at the same rate as the workers they represent. Workers also need direct representation in contract negotiations.

As NAFTA shows, workers cannot depend on the Democratic Party establishment leaders. The pro-corporate Democrats pave the way for bigger attacks by Republicans like the Michigan anti-union laws. Somewhat similarly, the big concessions by union leaders pave the way for further attacks by the companies. Workers often disengage from union structures when the leadership shows no capacity to fight as companies shut down factories and decrease wages and benefits.

Workers in heavy industry have the power to shut down profit-making in key sectors of the economy. When organized and harnessed, their resistance and organization can change the world. The Fiat Chrysler “No!” vote, if built upon, can start a resurgence of union activism among manufacturing workers, private sector workers in general and the labor movement as a whole.

Many union activists drew strength from the resonance of the determined “99% vs. 1%” message of Occupy and are currently enthused by Bernie Sanders’s statements about fighting the “billionaire class”. Political and protest movements can feed into and off of labor movement struggles across the world, and a clear victory at Fiat Chrysler would be a gigantic boost for all working-class people.