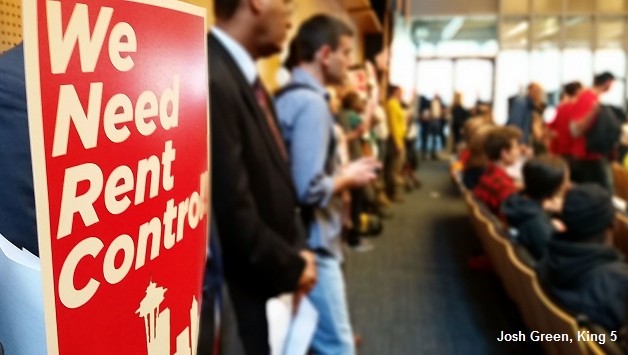 Something amazing happened in Seattle city council chambers on September 21. Just 3 months after publicly coming out against a resolution to lift the ban on rent control, councilmember Burgess introduced a resolution to do just that.

Just a few months ago we were told rent control isn’t popular, it can’t be won, and we should just shut up about it. And yet, under the pressure from our movement, the city council was forced to formally ask lawmakers in Olympia to lift the undemocratic ban.

But, we also know that the battle for rent control has only just begun. Kshama had this to say after the resolution passed:

“The real estate lobby, the Rental Housing Association, and big developers are scared by our movement, so they want this resolution to disappear into oblivion. Our movement’s goal is exactly the opposite. We need to use the resolution to build real pressure on Olympia.”

Nothing would upset the real estate industry more than to see the only city councilmember who can’t be bought re-elected and ready to continue the fight for affordable housing.

Get active today – join our volunteer team to build support in District 3.

With your support we will re-elect Kshama and continue building our movement for rent control!