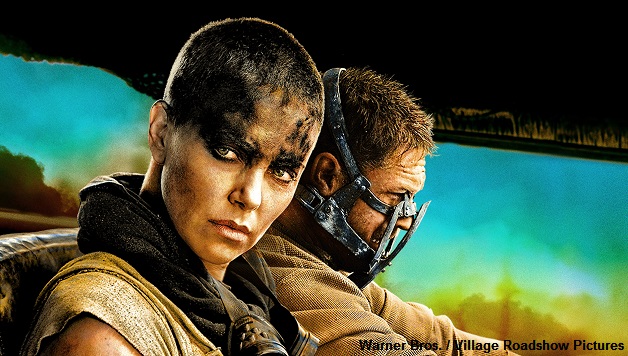 Mad Max: Fury Road is one of many retreads of 1980s action movies. It’s the fourth installment in George Miller’s Mad Max series about a post-apocalyptic patriarchal world starved for water, petroleum and bullets. But it’s also part of a recent trend of Hollywood hits, like Elysium and the Hunger Games trilogy, that weave science fiction thrills out of today’s struggles against the injustices of capitalism.

The barbaric future of Mad Max: Fury Road is a depiction of scarcity towards which today’s ruling class is dragging the world. It makes a high-octane, two-hour battle out of the struggle of our lives for a livable, equitable planet. It is as though the crises of capitalism we hope to avoid are shown in the extreme through the effects of warfare on the environment, and the writhing, diseased, and dispossessed masses.

Other action movies, including the previous Mad Max iterations, tend to focus on raw masculinity and horsepower. This installment, on the other hand, pivots on women collectively rising up to defy their oppressors and is one of the few action movies that pass the Bechdel test. The “wives” of Immortan Joe, the movie’s main villain, evoke a vision of resistance to patriarchal control with their parting messages scrawled across their former prison– “Our children will not be warlords,” “We are not things” and “Who killed the world?” While most action films celebrate a single hero whose rugged individualism saves the day, the heroes of this movie only succeed as they learn to work together, valuing all members of their team.

These themes of struggle resonate with audiences because they live in an unnecessarily brutal world where starvation and suffering is the reality for masses of people while they toil and fill the coffers of the 1%. Many protest movements have gained momentum globally in the last few years, and this film captures that spirit. It depicts generalized misery for the majority while control over the resources is in the hands of a few. And it depicts the struggle against that reality.

In Mad Max, warlords have had free reign to “kill the world” by producing a society stripped down to naked brutality and the glorification of death and destruction is the ultimate, devastating outcome of a world that reduces the utility of its citizens to their ability to die or breed for their leader.

From his Citadel, Immortan Joe has renamed water to “Aqua Cola”. He stands on high, releasing insufficient amounts of clean water to a scrappy crowd of dispossessed and disfigured citizens. It is a painful echo of the real world where 750 million people lack access to clean drinking water. Struggles in recent years in the Amazon against Nestle’s privatization of water and in India against Coca-Cola’s pollution and destruction of an entire aquifer give a real life echo of Immortan Joe’s Aqua Cola monopoly.

Though we do not have something so apparent as a crazed mad man with his hand on the only lever for clean drinking water, we have seen the chaotic results of distributing water according to private profit. Thousands of residents in Baltimore and Detroit have had their access to water shut off for small bills of less than $150.00 while businesses who owe millions have the political sway to keep their taps flowing.

A majority of people in the Mad Max universe don’t live to experience old age. Aside from the “mothers” shown connected to milking pumps like chattel, the only characters who appear to have lived past their youth are the three main warlords. These three men are given intimate camera close-ups to reveal their pollutant ravaged bodies riddled with deformities. Even the young, able bodied “War Boys” are shown to have tumors along their endocrine centers. The radiated, heavy metal landscape and air filled with the belches of their high-octane war rigs is slowly killing even the most powerful characters in the film. Again, as in the real world, this allegorical ruling class has access to healthcare, here blood transfusions and oxygen tanks, to help them overcome the environmental destruction they have wrought on the entire population.

So what, aside from a pulse-exciting car chase critique of patriarchal domination and ruin can be gleaned from a film like Mad Max? In a pivotal moment, the heroes, weary from battle, consider fleeing over unending salt flats in the desperate hope of finding water and greenery to start a new life. Instead, they steel their wills to return to Immortan Joe’s Citadel and seize the water and greenery the warlords have been hoarding the whole time. Today’s struggle for a better world similarly cannot be achieved by fleeing from society. It requires a reorganization of the world as it exists. And this is how a better world must be fought for: by uniting all those who toil under this system, the working class, and using our collective power to seize the infrastructure and resources from the ruling class and organize production and distribution based on need.

Of course Mad Max is a summer action blockbuster, not a socialist or feminist propaganda piece. But it is a distillation of many rational fears held by the population in the face of endless imperialist wars for oil and impending environmental destruction. It’s a powerful allegory for the international unity necessary to overthrow the yoke of capitalist oppression and exploitation.