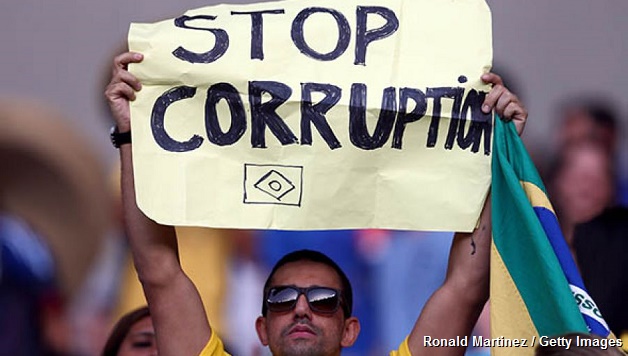 On May 27, the world of international soccer was rocked by yet another corruption scandal. Fourteen top ranking officials of FIFA, soccer’s world governing body, were indicted by the United State Department of Justice on a variety of charges including racketeering, money laundering, and wire fraud.  The charges stem from bribes and kickbacks paid out for media deals and vote buying associated with major world tournaments, including the World Cup. Recently appointed U.S. Attorney General Loretta Lynch charged, “These individuals and organizations engaged in bribery to decide who would televise games, where the games would be held, and who would run the organization overseeing organized soccer worldwide.” Swiss authorities are also investigating FIFA officials with their investigation centered on corruption relating to the awarding of the 2018 and 2022 World Cup tournaments to Russia and Qatar respectively.

FIFA was founded in 1904 to help further the spread of what would become the world’s most popular game by codifying the rules. Today, FIFA has become an undemocratic cesspool of corruption and sexism controlling the game of soccer. Where once it helped standardize the rules of a game that swept the international working class, it now acts as a brutal tool of capitalism, sweeping aside communities and the game’s traditions in the name of profits for the world’s largest corporations.

As if to thumb its nose toward human rights, FIFA awarded 2018 and 2022 World Cups to Russia and Qatar. Despite launching a “Say No to Racism” campaign, FIFA awarded the 2018 World Cup to Russia despite that country’s dismal record on LGBTQ rights. Perhaps even more scandalously, the 2022 World Cup was awarded to Qatar though that country had no infrastructure to host such a huge event. To rectify that Qatar has imported hundreds of thousands of migrant workers, many from Nepal. To FIFA’s and Qatar’s eternal shame thousands of workers have already lost their lives building stadiums, roads and other related projects. Already, The Nation reports that up to 1,200 migrant workers have died.

Fans across the world are looking to the corruption probes to finally clean up the corruption within FIFA.  Corruption scandals have become almost commonplace for FIFA, though this time seemed different for two reasons: The number of indictments handed down is unprecedented; and the arrests came a mere two days before the vote to re-elect the 17-year incumbent Sepp Blatter as President of FIFA. Blatter’s presidency has been riddled with scandal, yet he won this year’s vote despite the storm raging around him. Then, in another shock to the soccer world, Blatter announced that he would be resigning his presidency just four days after the vote.

This announcement has encouraged soccer fans around the globe that perhaps a new beginning was possible for FIFA. Blatter presided over decades of corruption. The general outlines were apparent to all, but the sordid details are only now seeing the light of day. Blatter, despite overseeing anti-racist campaigns, has maintained sexist attitudes in regards to the women’s game. When asked how the women’s game could be made more popular, he infamously stated, “They could, for example, have tighter shorts.” In a cruel ironic twist of fate the Women’s World Cup was slated to start a few days after the indictments, whose drama could well overshadow some of the world’s best athletes and soccer players on the biggest stage of their careers. In many ways it truly encapsulates how FIFA officials have treated women soccer players as second class citizens.

The twin investigations by US and Swiss authorities and Sepp Blatter’s subsequent resignation will see a superficial new beginning for FIFA. How far the investigation and the effort to root out corruption remains to be seen; certainly the first charge of the next president will be to end some of the most corrupt and obvious payoffs and kickbacks. Will the next FIFA regime signal a new day for women’s soccer? With a closed, undemocratic system – even the presidents of each national soccer organization, like US Soccer, are not elected – it remains to be seen how much public pressure can force reforms to the global game.

The problems of FIFA run much deeper than a few bad apple officials and a misogynistic president. Sepp Blatter’s predecessor, Joao Havelange summed it up pretty well when he said, “I came here to sell a product called football, and my intention is for this product to reach as many consumers as it can, and for its price to constantly grow.” Under Havelange and Blatter soccer fans became “consumers,” while the organization aimed to squeeze as much money from them as possible, for the highest possible profit. Millions of people around the world watch and play soccer. By monopolizing control over soccer FIFA has amassed massive amounts of revenue. According to Forbes.com, total revenue for the 2014 was a whopping $2 billion!

Under capitalism the games we love are monetized and used to generate massive amounts of profit. Soccer is no different. FIFA is not in business “For The Game. For The World,” as their slogan reads. While most FIFA officials probably did not join in order to reap the rewards of a corrupt organization the logic of running FIFA as a business in a capitalist world dictates that profit and money come before love for the game itself.

It is estimated that nearly a billion people watched the final game of the 2014 World Cup between Germany and Argentina. That represents a massive captive audience for the sponsors of the World Cup such as Coca-Cola, Adidas, Visa, Hyundai, and Budweiser, and the rest of the who’s who of corporate sponsors. These corporations are more than willing to pay FIFA handsomely for the exclusive rights to advertise in the stadiums, on television and radio broadcasts, and to put FIFA’s logo on their products. Of course they do not pay because they love soccer. They pay because a billion people will view the corporations’ advertising while watching the game they love.

Host countries of the World Cup and other tournaments are expected to provide what are called “FIFA quality stadiums.” The expectations are that not only should the stadiums be world class but also the surrounding infrastructure needs to be state of the art and the local areas need to be made safe for visiting dignitaries and travelling fans. Often these demands lead to abuses. The deaths of migrant workers in Qatar illustrate that perfectly. In preparing for the 2014 World Cup, Brazilian officials displaced hundreds of thousands of residents of the historic favela neighborhoods. It cost Brazil $15 billion total to host the tournament with most of that being taxpayer funded. Jules Boykoff, a former professional soccer player and current political science professor at Pacific University, calls this “celebration capitalism,” where public-private partnerships are created in a mood of excitement for the games so that “the public pays and the private profits.”

In the lead up to the 2014 World Cup in Brazil, for which Brazil spent $11 billion on public works projects alone, the people of Brazil took exception to how this “celebration capitalism” took advantage of their love for the game of soccer. Protestors demanded “FIFA quality schools,” “FIFA quality hospitals,” and “FIFA quality homes,” etc. The money spent on stadiums, some of which were practically abandoned after the World Cup, could have been spent on improving the infrastructure and social programs for millions of Brazilians. Even members of the Brazilian national team voiced their support for the protests. Neymar wrote on his Facebook page, “I always had faith that we wouldn’t need to get to the point of ‘going to the street’ to demand better transport, health services, education and security. I also want a fairer, safer, healthier and more honest Brazil.” The late Uruguayan journalist and author Eduardo Galeano summed it up perfectly:

“Brazilians, who are the most soccer mad of all, have decided not allow their sport to be used anymore as an excuse for humiliating the many and enriching the few. The fiesta of soccer, a feast for the legs that play and the eyes that watch, is much more than a big business run by overlords from Switzerland. The most popular sport in the world wants to serve the people who embrace it.”

Millions of working class people the world over embrace soccer as a refuge from the hardships of everyday life. Those who seek to use their love of the game to reap massive amounts of profit threaten to ruin the game. Fans should demand not only an end to FIFA corruption and abuses in places like Brazil and Qatar but control of the game itself. The money generated by soccer could be used for socially beneficial programs including building soccer facilities for everyone to use and enjoy regardless of ability to pay. The Brazilian protestors were correct in calling for FIFA quality hospitals/schools/homes. The money is there but under capitalism that money goes to a very few select individuals within FIFA and their corporate sponsors.

There is little point to having faith in FIFA reforming itself.

Fans could create democratic structures that could organize leagues and tournaments locally, nationally and globally. Fan organizations could ultimately demand the municipalisation of club teams so that they are run for the benefit of the areas in which they are located. For example, Barcelona Football Club has an ownership structure that consists of fans purchasing a membership in the club and electing an assembly of delegates to run the club. The Green Bay Packers do not have a single ownership but are likewise owned by the people who love the team. That is the only reason the Packers have been able to stay and thrive in North America’s smallest major league sports market.

While the indictments by the U.S. Justice Department are a good start in exposing and cleaning up the corruption inherent in FIFA it should be noted that this is the same Justice Department that refuses to expose and clean up the corruption inherent on Wall Street. Loretta Lynch can order the arrests of soccer officials and sports marketing directors but cannot order FIFA to be more democratic. Only by joining together in mass movements to demand a full investigation of FIFA corruption and the replacement of big business ownership with community control can working class soccer fans begin to truly democratize the game they love.