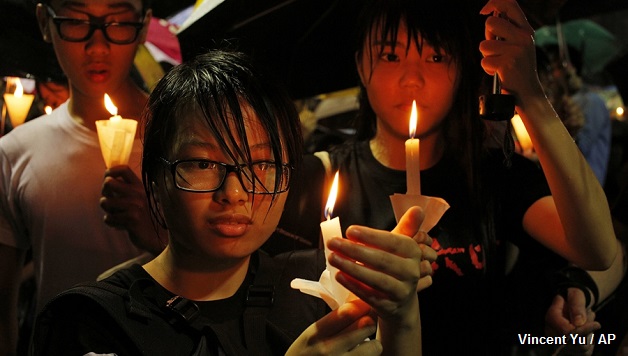 26th anniversary of the Beijing massacre on June 4, 1989 is also a warning of revolutionary shocks ahead

This article originally appeared on socialistworld.net.

The anniversary of June 4, the culmination of the ‘Beijing Spring’ and a day that will always be remembered for one of the most barbaric massacres ever perpetrated against peaceful protesters, is a cause for much official unease, and this year more than ever. The Chinese dictatorship is grappling with unprecedented problems with a debt-laden economy, burst real estate bubble, and growing unease among workers and poor farmers.

The mass Democracy Movement of 1989, which spanned seven weeks and witnessed millions of students and later also workers moving into political struggle, with demonstrations spreading to 400 cities, pushed the Chinese dictatorship to the brink of collapse. The military crackdown that began on the night of June 3 left 241 dead according to the government, but credible unofficial estimates put the figure in thousands. A wave of repression followed, with workers rather than students receiving the harshest penalties. This was mostly for the ‘crime’ of organizing strikes and attempting to launch independent trade unions – a development that lifted the struggle beyond its initial character of a student-led ‘protest’, albeit on a mass scale – and began to pose a more serious challenge to the regime’s survival.

What should particularly concern today’s generation of Chinese ‘Communist’ Party leaders is that this movement also developed out of a sharp deterioration in economic conditions with inflation hitting 30 percent and mass factory closures fanning discontent among workers across the country. In another similarity to today, the economic upheaval was exacerbated by tough economic reforms pushed through by the most zealous pro-market wing of the Chinese regime, in particular the CCP’s General Secretary Zhao Ziyang, who initially was supported by ‘paramount leader’ Deng Xiaoping. Zhao was deposed during the events of 1989 and died fifteen years later still under house arrest. The policies Zhao stood for, of embracing capitalism, were to outlive him however, and were continued and deepened by the new leaders that took control after the bloody crackdown of June 1989.

Could it happen again?

As the anniversary is commemorated particularly by another huge gathering in Hong Kong (last year’s June 4 attendance was around 180,000), more and more are wondering whether a similar mass movement could break out in China today?

Over the past 26 years the dictatorship has refined its repressive methods and used a combination of ‘carrot and stick’ to defuse protests when they break out. When a large-scale protest erupts, the authorities are quick to shut down the internet in that area, enforce strict media controls, and effectively cut off the ‘infected area’ from the rest of China. We have seen this in recent weeks with massive protests in Sichuan’s Linshui county, protesting against an announcement that a long expected railway line would be built elsewhere (May 16-17), and in Guangdong’s Qianshui township, with demonstrations against a proposed waste incinerator (May 20). Both these movements gathered tens of thousands and met with fierce repression. Many smaller but still sizeable protests have taken place in other parts of China during recent months. In most cases, some concessions (the ‘carrot’) are also offered, but these are rarely substantial and in many cases amount to empty promises designed to get the protesters off the streets – promises that are soon broken.

The combination of rapid GDP growth (a very big ‘carrot’ although few actually get a share of this) and increasingly high-tech repression are the main factors that have prevented the outbreak of a nationwide or cross-regional protest movement in the decades since Tiananmen. The regime’s ‘stability maintenance’ (weiwen) methods – supported by a budget that dwarfs even military spending – have succeeded in keeping protests local, short-lived, and in most cases without a leadership or lasting organisational forms. But as the ‘carrot’ of rapid economic growth withers away this poses the question how long before the regime faces mass movements it can no longer quickly defuse or break-up?

The past year has seen a wave of mass protests ripple through China’s ‘periphery’ with the Hong Kong Umbrella Movement, which actually lasted longer than the Tiananmen Square protests of 1989, and the biggest ever anti-government protests in Macau, which was formerly held up as a model of ‘stability’. We should of course not forget the political earthquake of the Sunflower Movement in Taiwan, which saw the biggest demonstration in that country’s history (with half a million people), and shifted its political ‘axis’ as shown by the electoral massacre of the Beijing-friendly government of Ma Ying-jeou in November. These movements are a portent of what awaits in China, where social and political grievances are potentially even more explosive.

There are at least three major signs of a deepening crisis in China that could ultimately spell the end of the one-party dictatorship. Top of the list is the worst economic performance for three decades, which has led many global commentators to point to a Chinese ‘hard landing’ as the main threat to the global economy. The downturn is already being felt from mining regions in Australia and Chile, to the coal and iron ore producing regions of China itself, which are experiencing a severe recession with around 70 percent of mining companies reporting losses. This is matched by a downturn in manufacturing industry, where employment has fallen for 19 consecutive months.

The government’s professed 7 percent growth rate is now widely seen as fictional, with the real growth rate falling to around half this level. According to Rodney Jones of Wigram Capital, the economy shrank in one-third of provinces (11 of 31) in the first quarter of 2015. “The downturn is being felt hardest in the poorer provinces – which have the biggest deficits and have relied the most on investment for growth,” he told the Financial Times. The government are attempting to shore up economic growth with a series of interest rate cuts and monetary loosening measures, but to date this has mostly fuelled a stock market boom and capital flight to other countries.

The second sign of crisis is the ongoing power struggle at the top – within the closed ranks of the CCP hierarchy. The announcement just weeks ago that the trial of former security czar Zhou Yongkang had been postponed suggests that things are not going according to plan for Xi Jinping and the ruling group. Perhaps Zhou has retracted an earlier confession or perhaps – as a person with plenty of damaging information on other CCP leaders – Zhou is threatening to go out with a bang if as seems possible he faces the death penalty.

It is impossible to know for sure what is happening behind the scenes, but what is clear is that Zhou’s trial and elimination are critical links in a chain whereby Xi hopes to consolidate a more centralised and personalised dictatorship, breaking with the ‘collective’ model of authoritarian rule that has applied since the time of Deng. To achieve this, Xi is using the biggest anti-corruption campaign in the history of the CCP in an attempt to bring its powerful factions to heel. The case against Zhou, who was doubtless very corrupt, is a lynchpin for this wider, far more important struggle. If Zhou has reneged on an earlier deal (such deals are common in high-level corruption cases) the question is whether he is acting in isolation or as part of a pushback within the elite by other senior figures and retired leaders unsettled by Xi’s purge.

The economic crisis and increasing perception that Beijing has lost its former ‘golden touch’ for policy-making can only sharpen the divisions within the regime. As Gideon Rachman noted in the Financial Times (9 February 2015), “It may be that Mr Xi is so perfectly in control of the political system that he can afford to take on powerful interest groups. But well-connected people in Beijing now speculate about the possibility of an attempt to remove the president. Some note that previous bouts of popular unrest, for example in 1989, coincided with divisions at the top of the Communist Party.”

Thirdly, and heavily influenced by the first two factors, is the rising spiral of mass unrest. The movement in Linshui was extremely significant as this occurred in a poor region dependent on farming and mining. It is a warning that many more such protests could break out if the economy slips further into recession. The protesters – numbering 100,000 by some accounts – chanted “Bring back our railway” following the announcement that a planned high-speed railway line would follow a more expensive route through the nearby town of Guangan, which was the birthplace of Deng Xiaoping, but missing Linshui. Guangan already has a railway and an airport and local people in Linshui see the loss of the railway as a body blow for the local economy. It will not have escaped the attention of China’s rulers that mass protests in Sichuan in the summer of 1911, to defend the provincial railway and ‘local interests’, played an important part in bringing down the Qing dynasty, which fell to a military mutiny later the same year.

In Linshui fierce clashes were triggered by police brutality, according to eyewitness accounts, evoking a ‘miniature Tiananmen’. There are unconfirmed reports of four people killed, including a teenaged girl. Pictures on social media show many bloodied protesters, men and women, and eyewitnesses say riot police drafted into the town brought armoured cars and used tear gas. This also shows that heavy-handed policing is not exclusive to restive non-Han provinces such as Xinjiang and Tibet, many parts of which are now under de facto military rule. Workers’ strikes, which rose three-fold in the first quarter of 2015 over the same period a year ago, have also met with increasing repression. At the same time the government is intensifying its crackdown on labour NGOs that in many cases have helped workers to organise industrial action.

But while the ‘stick’ of repression can help the government to stamp out protests in the short-term, this is at the price of a massive build-up of anger and resentment. Hundreds and thousands of victims of the current repression – injured protesters, sacked workers’ representatives, arrested feminists – are being pushed into an increasing search for alternatives to the current system. Just as Beijing’s ‘stimulus’ policies have created an economic time bomb in the form of crippling levels of debt, its repressive measures are creating a political time bomb. When this detonates, which is only a question of time, then China could witness a wave of mass struggle that puts even the events of 1989 into the shade.