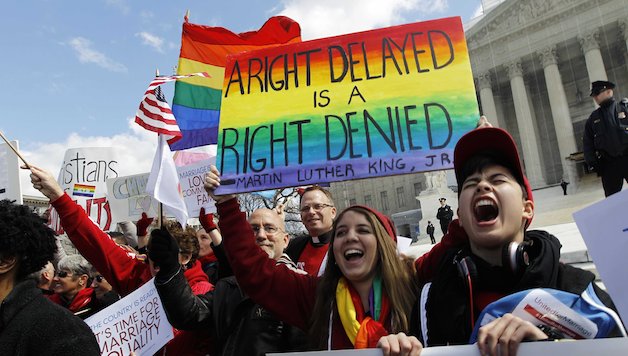 The Next Steps In Queer Liberation

This month, the Supreme Court will rule on whether marriage rights should be given to Lesbian, Gay, Bisexual, Transgender, Queer, and Intersex (LGBTQI) people across the country. The fact the Court is hearing this case reflects a welcome shift in social attitudes brought about by decades of struggle and significant marriage equality victories in state after state.

At the time of writing, it is not clear whether the Court will endorse nationwide marriage equality. Whatever it decides, the hesitant and discriminatory process underscores how ineffective the capitalist system is at meeting the needs of marginalized and oppressed Americans. However, even a ruling against marriage equality will not stop the LGBTQI struggle: too much has been won by pressure and organizing from below.

Regardless of the outcome, queer socialist activists have continually argued that the fight for equal marriage rights must be linked to broader issues like solutions to the homelessness, incarceration, and unemployment too many LGBTQI people face.

Unfortunately, the struggle for marriage equality has not been used as a springboard to widen the struggle, but rather to open up new divisions within the LGBTQI communities who have so far benefitted from these steps and those with different needs. This must be changed. New leaders in the LGBTQI struggle should offer such a perspective.

Socialist Alternative is celebrating Pride month by developing a radical, socialist program for queer liberation in the post-marriage equality age. Grassroots struggle highlights three issues, among many others:

Queer inclusion in unions, 15 Now, and radical movements must be a top priority. The solidarity and collective struggle between the Black Lives Matter movement and Black trans women leaders around the abominable murders of Black trans women, which every year represent the majority of anti-LGBTQI homicide, should serve as an organizational model.

Second, attacks from the Right, such as bills criminalizing trans people using the bathroom, must be resisted. What our community needs isn’t aggressive policing: instead, sustainable and safe housing, such as the LGBTQI youth shelter campaigned for by Kshama Sawant in Seattle, is the answer.

Finally, the fight against HIV/AIDS must link arms with the struggle for universal public healthcare. Despite enormous advances against HIV, only half of HIV+ people in U.S. get regular care (Centers for Disease Control and Prevention). With advances like PrEP and PEP (drugs to prevent HIV transmission), the rates of new HIV infections should be plummeting, but Big Pharma has viciously withheld lifesaving drugs. These must be publicly accessible to everyone who needs them. The same principles apply to people whose bodies do not reflect their true genders: applicable trans-related healthcare is not cosmetic, but rather a matter of life and death.