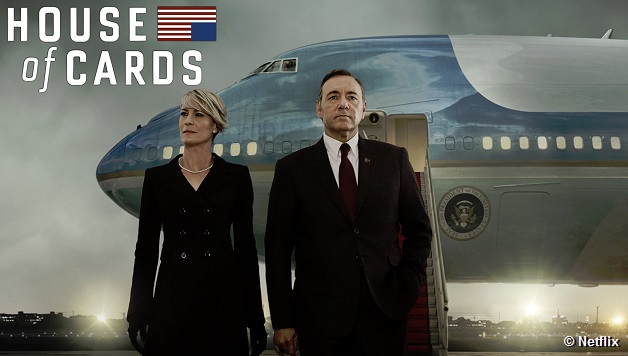 (Spoiler Alert!!: This piece contains overt references to events which happened on House of Cards during the recently released Third Season.)

House of Cards returned for a third season in March 2015 and brought with it twice as much artistic quality, but only half the political criticism of the first two seasons.

Much of the intrigue which made the show wildly successful in its first two seasons is now gone (a cursory browse of fan reactions online corroborate this).  In Season 3, we have new pivot towards deeper character drama; a much smaller universe which revolves precariously around Frank and Claire, whose story arcs have all but eclipsed those of the all other interesting characters in the show.  Whereas in the first two seasons, it was fun to watch Frank and Claire as the marauding barbarians at the gate, Season 3 reformulates them as the conventional American first family once they are safely ensconced in the White House. This almost requires that the writers re-humanize them for their new roles, even if at times they have to remind us that this couple got there via a lurid course of homicide, subterfuge and high-handed manipulation.

The third season of House of Cards might have been disappointing to some, but the show is still momentous as a piece of political commentary and as a work of art. It feels like a natural progression in a new wave (notably beginning in 2008) of sociopathic anti-heros developed with careful nuance and complexity, custom-made for premium cable.

As a piece of popular culture, it isn’t surprising that House of Cards resonated so deeply with its viewers. Beloved anti-heroes like Walter White, Don Draper and Tony Soprano, paved the way for our eager reception of Frank Underwood. His Machiavellian charm is directed squarely at us, and walking through the seediness of American politics by his side helps us develop an intimate relationship with him on screen. He’s a villain we can’t help but root for.

It’s interesting that House of Cards debuted in 2013, a few months after President Obama’s re-election. The show’s inherent cynicism (and its wider resonance) betrays the sentiment of optimism following season two of President Obama’s “hope-and-change” revolution. The show’s meteoric success also follows from a pretext of economic turmoil, deep mistrust in the political system, and a groundswell of social protest since Occupy. In a very concrete way, House of Cards proves that the American populace was ready for an antidote to the sanctimony and naïve reverence of liberal democracy that The West Wing represented a decade ago.

With the rallying cry of Occupy Wall Street still reverberating in the recent past, the depiction of American politics as deeply corrupt and dominated by powerful interest groups has a particular appeal among progressives post 2008.  Underwood begins as a leading member of the House of Representatives, an institution which is beset both in the show and in reality by low approval ratings and a series of scandals. When he finally becomes president in Season 3, Frank himself faces low approval ratings and is unable to reverse the trajectory of his failing economy. His inability to perform effectively is underscored by his stubborn application of neo-liberal logic (using taxpayer dollars to fund job creation in the private sector) as a solution to his most frustrating policy problem: job growth. House of Cards succeeds here in its scrutiny of policy and the motivations of those making the policy.

Frank hopes that he can will his ill-fated jobs plan to work by the sheer power of his charismatic leadership. He’s by no means a centrist, but compared with his political opponents, he offers an interesting parallel to other real-life Democratic presidents who spoke broadly about liberal policies but implemented firmly pro-corporate agendas in practice. Bill Clinton and Barack Obama come to mind frequently.

Frank’s approach to negating dissent is not to provide a permissive forum for principled debate. He uses his authority as the president to get his when coercion through incentives or blackmail fails. This screenplay brand of liberal politics reflects reality. The recent rancor between Obama and opponents in the Democratic party over fast-tracking TPP provides the most recent example of how critics –mostly liberal democrats- are publicly attacked for questioning policies that run counter to progressive values.

It would be easy to mistake all this as a radical critique of the structures of power and oppression that operate both in and outside of Washington politics. House of Cards is about the raw, visceral ambition of two people and their reptilian-brained revolve to manifest their destiny at all costs.

Frank and Claire do only what benefits Frank and Claire. They are not here to resolve any of the serious political and social issues, which are directly in the orbit of their power. They use those issues opportunistically to leverage more political capital. Friends (to the extent that either has any) are mere pawns. All of the major tropes of Hollywood establishment are there. White privilege is an anchor piece in the wardrobe of the elite. People of Colour are fully expendable and have well-defined expiration dates. Hetero-normative gender roles are de rigueur, and not even a deeply-closeted homosexual President and his sexually languishing First Lady have the power to change that.

The cynicism of House of Cards makes it easy to ingest and possibly even easier to mistake as political satire. It’s a show whose message is unpretentious and clear: bad men and women hold the reigns of power in the great free world. All of the sacred precepts of democracy and the social contract are subordinate to the self-interest and callous intentions of a minority of powerful people. This is all tremendously entertaining to watch. Just don’t call it a progressive show.