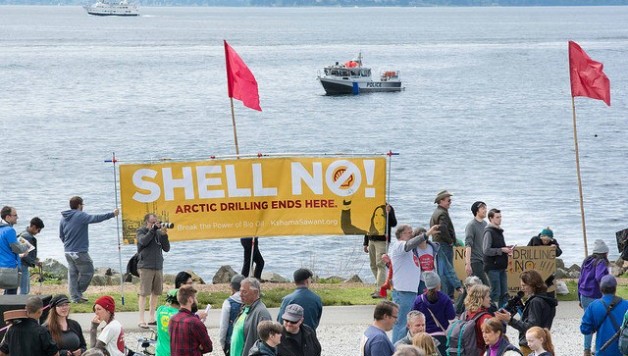 Below is the text of a leaflet from the campaign to re-elect Socialist Alternative Seattle City Councilmember Kshama Sawant.  The campaign will be handing these out to help build opposition to Seattle hosting Shell Oil’s Arctic drilling rig. Download the leaflet here.

From the beginning, when news broke of the secret deal struck between the Port of Seattle and Shell subsidiary Foss Maritime to bring Shell Oil’s Arctic drilling rig to Seattle’s Port Terminal 5, the public has been told that this is an inevitability.  The contract has been signed.

This is exactly what everyone said about the Keystone XL pipeline, and yet, 4 years later, it’s still not approved.  All 6 projects to develop West Coast coal export terminals have been effectively killed from local grassroots organizing massive opposition. We know if we build a strong enough opposition, we can send this climate destroyer packing and unable to make the necessary repairs to return to the Arctic.

For 3 months activists have been building opposition, planning actions to stop the repair work, and if repaired, to stop it’s return to the Arctic.  With the support of Councilmembers Kshama Sawant and Mike O’Brien, the Seattle City Council unanimously passed a resolution urging the Port of Seattle to reconsider the lease.

Mayor Murray, on the other hand, has played both sides.  While he commissioned a study that found the permit isn’t legal, compelling the Port of Seattle to request Foss Maritime delay its arrival, he also kept secret that the drilling rigs were headed to Seattle. If activists had known back in November, when Mayor Murray first found out, we would have had crucial additional time to begin building opposition.

The role of the Obama Administration has been similar. While Obama speaks about serious climate action, he recently gave Shell the green light to drill in the Arctic.  Not only does this fly in the face of the science Obama says drives his decisions, Shell also has a criminal drilling track record.  One of its subsidiaries pleaded guilty to 8 felony counts for environmental and other violations related to Arctic drilling.

It’s clear, we cannot rely on Democratic Party politicians who tout their acceptance of the science, but whose actions don’t match their words.

Unite the Environmental and Labor Movements

Port Commissioner Bryant attempts to divide working people by claiming “it will cost us over 200 jobs and many hundred more jobs in related businesses.” This is a false dichotomy of jobs versus the environment. Many more jobs are, and could be, created by investing in clean energy infrastructure projects.

On the day of the worlds’ largest ever demonstration to stop climate change, Seattle saw an impressive coalition of labor and environmental groups on the streets.

“Im confident,” says Kshama Sawant, “we can bring this coalition together again to oppose this use of a public port to promote Shell Oil’s profits at the cost of the destruction of the climate and together, demand union living wages jobs that don’t risk our collective future.”

End the power of Big Oil!

Shell and big oil corporations put their profits over people and our environment. Clearly they will continue drilling and burning every drop of oil they can find, putting everyone at risk.  It is up to us to stop them.  But, we cannot control what we do not own. These climate-destroying corporations need to be taken out of the hands of the corporate CEOs and into public ownership under the democratic control of working people.  We can use the resources to plan a rapid transition to clean energy, which would create millions of living-wage union jobs.

Seattle can be a leader on climate and the environment. Together we can build a powerful grassroots campaign to stop this deal and demand investment in clean energy jobs. Join us!