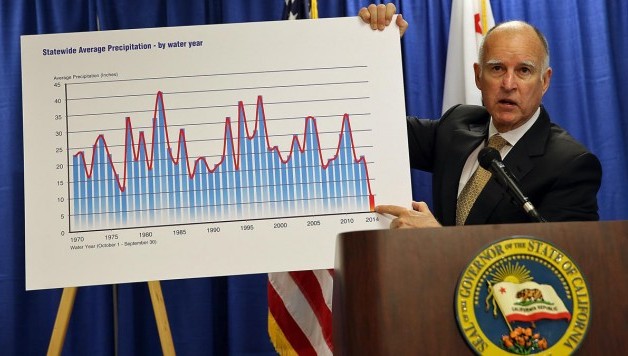 It barely rains in California anymore.  In the face of an historic drought, Democratic Governor Jerry Brown has mandated the state’s first ever rationing of water.  The state is in its fourth year of a drought that some scientists estimate is the worst in 1,200 years.  Annual rainfall totals are the lowest on record, and the snow pack is down to 5% of the state’s annual average.  The governor is calling for urban areas and households to achieve a 25% reduction in water use this year, but the reality is that this small band-aid is not going to fix California’s long standing mis-use of this major resource. Residential water use only accounts for 10% of statewide use.  While the Governor’s call to cut urban water use makes sense,  his reluctance to question the entire picture, including agribusiness’ use of 80% of the state’s water, reflects the domination of big business over politics. A California without water would have a huge impact in grocery stores and homes across the US. California produces a third of the nation’s vegetables and two-thirds of its fruits and nuts.  It takes about 50 gallons of water to produce a pound of strawberries and about 2,000 gallons for a pound of beef.  Almonds, a highly profitable but more water intensive crop, represent about 5% of the state’s total water use.  Almond acreage has increased steadily since 2002, representing a huge investment on the part of agribusiness.  Overall, vineyards and orchards are increasing in California, and unlike cotton or corn, now on the decrease, cannot be left fallow in drought years to conserve water.

Most California water comes from two sources: the rainwater and melting snows that feed the rivers and are diverted to the state’s water districts through a complex system of reservoirs, pipelines, and canals; and the once huge reservoirs in its underground aquifers.  One of California’s major rivers is the 400-mile San Joaquin which has been so diverted and dammed that it is now considered an endangered river and runs completely dry for part of its course.   Other California rivers are also struggling; the Los Angeles River has been reduced to nothing more than a paved culvert in some places.

The groundwater, which in an average year provides about 40% of California’s water,  has been so consistently tapped for irrigation that over the past 150 years the water table in the Central Valley has dropped by as much as 400 feet in the worst affected places.  Agribusiness’ response to dwindling rain water has been to dig deeper and deeper wells into the aquifers. Well digging has become a boom industry in the Central Valley with big farms paying tens of thousands of dollars for deeper wells. Poorer rural families whose wells have run dry, are left without a reliable source of drinking water and are now forced to haul water in barrels to their homes.  This ground water pumping is not currently regulated in California, and a recent bill in the State legislature to introduce regulations was passed with so many delays in implementation as to make it essentially worthless.

Despite the Democratic Party’s super majority in the state capitol, few politicians are willing to question the agriculture industry’s methods. Pumping water out of the ground is not sustainable. Flood irrigation is not sustainable. Growing so much food in a state that is primarily an arid grassland eco-system is not sustainable. While it is important to acknowledge that Californians should not be growing the kind of lush green lawns that are possible in other parts of the country, we also need to question the role of California’s agriculture, as under the current free market system with its profit-driven motivation, the current water supply will continue to be depleted, diverted, and degraded.  With permanent changes to the aquifers and the river ecosystems there has been and will continue to be permanent loss of habitat and species native to California and increased water insecurity for all.

Governor  Brown’s cozy relationship with the oil and gas industry also is a serious threat to California’s underground water aquifers.  In other parts of the country, fracking wells have led to groundwater contamination with methane and other chemicals, a side effect California can little afford.  In 2011, Brown fired  two top state employees who recommended increased regulation of fracking in California.  In 2013 Brown finally approved regulations on fracking which only require companies to notify neighbors and get permits, but place little other restrictions on the process. While fracking itself uses large volumes of water, its real danger is in poisoning vast volumes of underground water with the chemicals it uses. Currently oil and gas companies are not required to disclose what chemicals they are pumping underground. Fracking also reduces the urgency to develop alternative, sustainable forms of energy and contributes to the global warming that will only accentuate California’s water crisis. Rain water collection, grey water systems, drought tolerant landscaping, and drip irrigation are all important measures that can help more efficiently utilize the shrinking supply of water in California. However, while big business and their politicians continue to fail in adequately planning a water system that is sustainable both in times of rain and drought, the kind of holistic, fundamental changes that are required for California to survive the water crises in the coming years will never materialize. California is headed for a more severe water crisis that even a short term easing in the drought will not resolve.  And even so, with global climate change, these types are droughts will be more common in the Western United States.

The immediate impact of the water crisis on urban communities will most likely be rising food prices. This, alongside unemployment, rising rents and low pay, will only confirm the crisis that the free market represents for working people. The business-backed Democrats have failed California, only a party of the 99% can point the way forward for an equitable and sustainable world.

Socialist Alternative believes a mass mobilization of labor, farm communities and the environmental movement should develop a sustainable plan for water use in California. Such a movement should also run labor, small farmer and green candidates to fight for a massive public works program for green jobs at a minimum of $15/hour to rebuild the state’s infrastructure consistent with a sustainable economy and ecology, including water recycling systems and desalination plants.

Such a movement should also fight for: