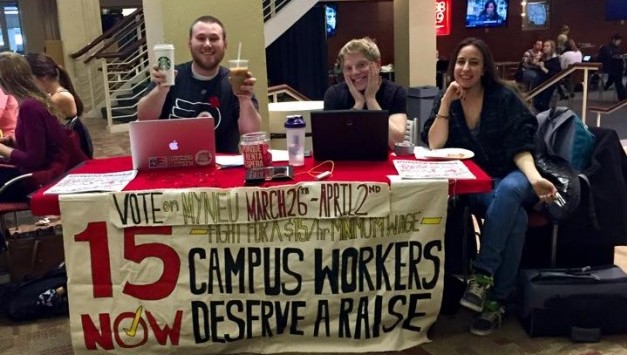 On April 6, students at Northeastern University made history by winning a student referendum vote to implement the nation’s first campus-wide $15/hr minimum wage.  The initiative passed with 76.4% of the vote.

Not only did these students break ground nationally by becoming the first campus to demand $15, they broke ground at Northeastern by smashing all previous election records.  While the referendum does not immediately raise wages for campus workers, it shows a clear mandate to address the issue of income inequality on campus and forces the Administration to act.

With a coalition of 9 progressive student groups on campus, 15 NowNortheastern is poised to put their university on the front lines of the fight for wage equality nationwide. Northeastern students are speaking out and fighting back against wage inequality on their campus.

“There’s an unusual buzz on campus,” says Elan Axelbank, a Northeastern student and one of the main organizers of the campaign.  “You’d be walking around campus during voting week and just hear random groups of people talking about 15, it was awesome.”

We need to build on this victory by spreading 15 Now to every campus, city and neighborhood in the country.  The movement for a living wage is growing and winning more and more victories every week.  On April 15th, workers, students, and community members will be marching in over 200 cities nationwide to demand $15/hr for all workers.

Join 15 Now in marching on this national day of action – RSVP here.

Want to start a 15 Now chapter on your campus or in your neighborhood?  Contact 15 Now Northeastern at 15nowNU@gmail.com or 15 Now national at info@15now.org.

Give us Decent Jobs or Unemployment Benefits!