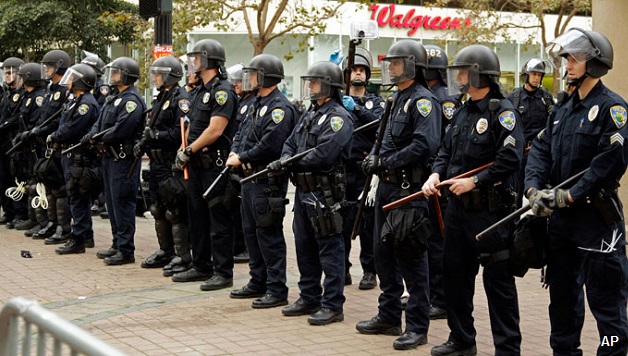 U.S. Attorney General Eric Holder and the Department of Justice (DOJ) have lifted the lid on the ugly reality of “criminal justice” in Ferguson. Of course, the only reason this investigation happened was due to the pressure from Ferguson’s youth revolt following the killing of Michael Brown which stayed on the streets for months and ultimately sparked a national movement!

The report details how city officials turned a blind eye to the racist practices of the police and courts, sometimes encouraging them, as long as these practices boosted revenue. Ferguson’s courts used extortionist policies to use the most minor offenses to trap people in a never ending cycle of fines, arrest warrants, and court fees for years. Police ensured a steady stream of people passed through the court system, often times, through unconstitutional means. The DOJ found police used the threat of incarceration almost exclusively for the purpose of collecting payments.

Given the report’s damning evidence, Attorney General Eric Holder has threatened to sue the city if it doesn’t enact  reforms and threatened to disband the local police force if necessary. Six officials have already resigned in the fall out from the report, including the Ferguson’s manager and the police chief, Thomas Jackson.

At the Selma March commemorating the 50th Anniversary of Bloody Sunday, President Obama said, “What happened in Ferguson may not be unique…but it’s no longer endemic, or sanctioned by law and custom.” While the state of Missouri is not Mississippi under Jim Crow, it is simply not true that the problem is not endemic. There are literally hundreds of Fergusons across the U.S.! This report should be a call to action in all the other Fergusons.

There are, of course, serious limits to the reforms being proposed which include civilian involvement in police decision making, stopping the use of arrest warrants to collect fines, and lowering bond amounts. For one thing, there is no proposal to limit the police’s right to use lethal force against unarmed civilians whenever they deem there is a “threat” to an officer. Holder and Obama, despite bemoaning the level of mass incarceration in the U.S., do not point to any credible road to ending it. Clearly, the main goal of these reforms is to restore the “credibility” of the police and court system which is now questioned by millions.

Nevertheless, the reforms contained in the report, if implemented, would represent an easing of the massive and oppressive police regime faced by black workers and youth in Ferguson, where the movement began, and that represents a victory for the Black Lives Matter movement (BLM).

For A Real War on Poverty

Another question that this report leaves unanswered is: How will poor cities with no significant tax base raise money for the programs and services they need? Instead of using militarized policing to fund ever more militarized policing, we need a massive federally-funded living-wage jobs program targeting the most deprived communities. This must be combined with a federal $15 minimum wage. We cannot truly say “Black Lives Matter” if we’re not also improving the material circumstances of America’s black and brown people, alongside fighting against police violence.

As Socialist Alternative has repeatedly said, there is an urgent need for the unions and the national civil rights organizations to bring their resources to bear in the fight for economic and racial justice.

As we go to press there have been further militant protests in Philadelphia, Virginia, and Madison, Wisconsin against police brutality. BLM is not going away.

The Justice Department report provides an opportunity for activists to build on the limited reforms being forced on Ferguson – toward a true mass movement to win deep-rooted reforms in communities across the country while also fighting for the redistribution of wealth that is essential if there is to be a decent existence and a future for the youth in all communities.