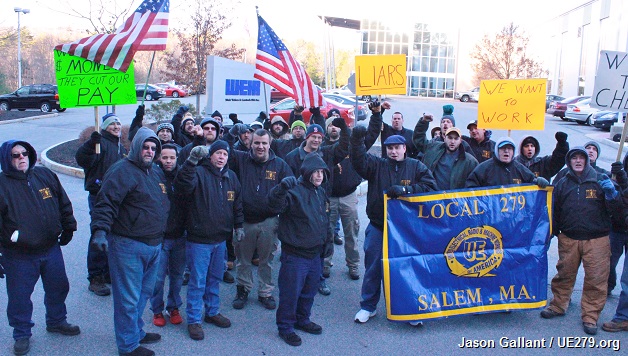 On March 6th, after a militant, three-week long strike, UE Local 279 ratified a contract with Weir Valves and Controls in Ipswich, MA.  The results of this strike illustrate the accomplishments that are possible when trade unions are willing to take risks and stand up for fair labor practices and a fair contract.

Roughly three years ago, the attitude and practices of the management at Weir Valves became dramatically hostile to the workers.  The members of UE Local 279 were under no illusions that the grievance process and the labor board would alleviate the bullying tactics of the management, and although they did seek redress via these methods, they immediately began militant shop-floor action.  Their contract expired in November of 2014, and the members knew they were in for a fight.

Socialist Alternative New Hampshire / Lowell member and UE Field Organizer Omar el-Malah, one of the main negotiators for the union local, remembers his early impressions of the UE members at Weir Valves when he attended a stewards’ training two years ago: “When we got to that section [on shop floor actions], however, the teachers became the students as our UE brothers schooled us on all the tactics they’d been using on the shop floor to fight against management attacks.”

The strike was well-planned and the membership was ready.  The primary grievances were over language in the newly-proposed contract that included unacceptable demands regarding matters of job security and fairness in the workplace, as well as the introduction of new disciplinary procedures, the right of the company to subcontract temporary workers during layoffs, and the right of management to use favoritism and disregard seniority when assigning overtime.  This tactic, of course, was the management’s way of dividing the workers against each other.  The strategy failed, as Weir workers picketed against the company, with regular chants of, “Who are we? UE!”

“Spirits were high as we shivered out there in the cold, screaming at the top of our lungs at this faceless building, knowing full well the people on the other side of the wall were getting our message. It couldn’t have been clearer. We didn’t do it for money. Hell, we’ll never recoup our losses. Four weeks with no income was a heavy burden on us all. This had much more meaning than that…

“We were warriors – all of us. The most amazing thing was, the people fighting the hardest for seniority were the guys at the bottom. The guys who faced layoff when we returned. They made it their fight more than anyone. It was awe inspiring.”

After three weeks on the picket line in the cold New England winter, the workers forced management to drop the demands regarding temporary workers and overtime.  “We turned away trucks, cut off their supply lines. Even non-union drivers were supporting us. The company was bleeding, and we knew it… The company declared an impasse, and… all the stuff we had been fighting against was removed, so with that, we voted to bring the fight inside,” recalls Gallant.  The membership and strike committee unanimously concluded that, although they would return to work while negotiations continued, they would not sign a final contract, as it would include a standard no-strike clause that would prevent them from fighting back should management return to attacks on its labor force.  This is exactly what the managers did the very day the workers returned to the shop floor.  The UE prepared to file charges with the National Labor Relations Board, and the workers were prepared to go back out on a ULP (unfair labor practices) strike.

The militancy of the workers finally won out, and they facilitated a change in the individual negotiators on the side of the management.  These new negotiators realized the strength of the UE Local, they agreed to the union’s longstanding demands for a workplace free of intimidation, favoritism, and incentivized layoffs, which was a victory both in terms of concrete working conditions and union pride.

The History of the UE

The United Electrical, Radio, and Machine Workers of America (UE) has a history stronger than most unions still active today.  One of the first members of the CIO, its membership grew in the 1940s to over 600,000.  Although today it only has about 35,000 members nationwide, it remains a remarkably militant organization in the face of the incessant war against labor unions of the past 40 years, and regularly attracts small local unions as affiliates.

The most distinctive displays of UE’s militancy is its refusal to sacrifice its democratic structure in favor of the models prevalent in the rest of the labor movement, alliances with independent unions in other nations, and its ability to carry out some of the most militant actions in recent history.  When the company threatened to shut it down, UE members at Republic Windows and Doors in Chicago occupied their plant and succeeded in the fight against the company’s threats to deny their severance pay in 2008.  It was one of the most inspiring shows of militant union action in years.

The democratic structure of the UE has resulted in several rare but principled practices.  Since UE’s founding, its constitution has limited the pay of its officers to “a salary not to exceed the highest weekly wage paid in the industry,” which is in direct contrast to the bloated salaries of the leaderships of many other unions, public sector as well as private.  Unlike other unions, UE has a strong tradition of refusing to endorse Democratic Party politicians, citing their direct assaults on union rights.  In 2012, while expressing his complete disapproval of the AFL-CIO’s decision to endorse Obama for a second term, the then Political Director of the UE, Chris Townsend, called elections a “two-party trap.” He then pulled no punches when illustrating Obama’s hostility towards labor with a reminder that he had endorsed the mass firing of unionized teachers in Rhode Island.   A 2012 interview with Townshend responding to the attacks on labor unions led by both Democrats and Republicans can be viewed on Aljazeera’s website.

UE Local 279, in particular, has shown a strong sense of solidarity with other unions and workers’ movements.  Some members of the local participated in Black Friday actions at Wal-Marts in Danvers and Chelmsford, the latter organized by members of Socialist Alternative.  The local also donated $1,000 of its own funds to the strike fund of IBEW and CWA workers who went out on a four-month long picket against the management of FairPoint Communications and an extremely concessionary contract proposal.

The Importance of Unions Today

Although impressive by current standards, the success of the defensive actions of unions like the UE is modest in comparison to the gains of the early years of the working-class led union movement. For example, in the 1930s, trade unionists led militant actions which employed such tactics as mass picket lines that no one dared cross and solidarity actions or sympathy strikes. In contrast, the state of the vast majority of labor unions today is highly problematic due to a lack of rank-and-file involvement that leads workers to become demoralized enough to accept  contracts filled with concessions and givebacks.  These capitulations come from the mistaken impression that union members must rely on their “friends” in the Democratic Party and cannot afford to appear “unreasonable.” However, the politicians of the Democratic Party are far from being friends of the working class.  As Socialist Alternative has always insisted,the Democratic Party is one of the two parties of big business and capitalism. These politicians have a vested interest in preventing workers and the unions that are supposed to represent them from making any real gains since powerful unions with the ability to strengthen the rights and salaries of workers are completely contradictory to the interests of capitalism.

It is easy to understand how this crisis in the labor movement is occasionally cited by some radicals and leftists as a reason to dismiss the idea that labor unions have any role to play in powerful social movements.  However, at their core, unions are organizations of large groups of workers with a heightened level of class consciousness which includes an awareness of the advantages of collective bargaining and collective action.  Although the current leaderships of many unions will not encourage, or often even allow, their members to engage in this level of fightback, the class war waged by the capitalists makes such actions necessary. It is the responsibility of socialists to involve ourselves, wherever possible, in the fight to democratize unions, to advance bold, militant class-struggle tactics and, finally, to lead the working class to the understanding that only our collective efforts can beat back the bosses’ attacks.  As we help to initiate new workers’ struggles, we must encourage the growth of bold unions by educating workers on the collective power we wield in the system of production and services.

The successful strike by UE members illustrates the power of unions fighting against a greedy and abusive management and should serve as an inspiration that can point the way forward.  It is evidence that when workers band together in unions and fight, they can win.

NOTE: In Socialist Alternative #12, the headline of the article mistakenly referred to the Weir machinists as “electrical workers.”  We apologize for the error.