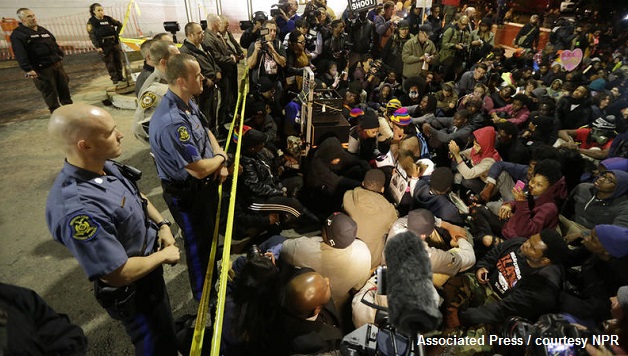 #BlackLivesMatter Searches for a Way Forward

The youth of Ferguson and the #BlackLivesMatter (BLM) movement have had a profound effect on U.S. society. Going forward, police departments around the country can expect that any atrocities they commit will be met with protest. The policy of mass incarceration is increasingly questioned. At a deeper level, this is the most significant uprising of black youth against racism in 40 years. While the movement may have become less visible in recent weeks, it has certainly not disappeared, and it will reemerge and play a huge role in political developments in the months and years to come.

Though on a lower scale, protests continue against police killings. In Pasco, Washington, more than a thousand people protested after Antonio Zambrano-Montes was murdered by the police on video – with his hands in the air. In Cleveland, thousands continue protesting the murder of Tamir Rice.

A whole new generation of black youth has stepped forward and is looking for a way to fight back. Millions more have been shaken by the police murders, the failure to indict the cops responsible, and the heavy-handed response to Ferguson protesters.

As Matt Taibbi wrote in December, “the police suddenly have a legitimacy problem in this country,” (Rolling Stone, 12/05/2014).

A section of the establishment sees that something needs to be done. They hope a few small reforms – like  body cameras, new training procedures, and new protocols – will send a signal to millions that the problem is solved. But the movement correctly rejects the idea that this is in any sense an answer to  the systematic oppression that black and brown people face at the hands of the police.

Yet what will it take to win real changes? To bring meaningful justice for families and communities?

In St. Louis, Missouri, a proposal for a police department citizen review board – which, in reality, lacks teeth and is not elected or accountable to the community – was met by ferocious opposition from the police and the right wing,  demonstrating that even small, ineffective reforms will be hard to win.

BLM and the Fight for 15

Socialist Alternative has called for uniting the struggle of low-paid workers for $15 and a union to the struggle for racial justice. In some areas, this has begun to happen. Labor was instrumental in the victories of the Civil Rights Movement in the ‘50s and ‘60s, which led to a growing role for black people and women in the unions throughout the ‘70s and ‘80s. The labor movement could play a powerful role in the struggle today – despite its enormous retreat – because it still embraces millions of people, disproportionately people of color, and it still has massive resources.

Important discussions are taking place as the BLM movement has generally moved from street protests to debating the lessons from the past six months and the way forward from here. (See Socialist Alternative’s article on The Gathering in New York City).

“Black Lives Matter” is a powerful message that can be further developed and given specific content in the coming period. From racist policing to low pay – this system does not value black lives. By linking the fight against racist policing to concrete demands for a $15 an hour minimum wage, decent housing, health care, and other issues that all working-class people can understand, we can build a powerful movement.

One hundred fifty years after the smashing of slavery, capitalism has completely failed to overcome racism. As Martin Luther King said toward the end of his life, “maybe America must move toward a democratic socialism.”