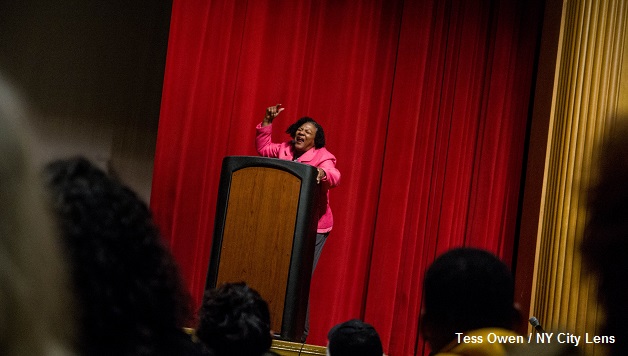 On January 30, 2015, local activists and the organizers behind December’s 60,000 strong Millions March NYC convened a city-wide half-day conference at Riverside Church on the future of the #BlackLivesMatter movement, simply titled “The Gathering”.

The day’s program aimed to do three things: educate, ground, and empower people to mobilize and to “finish the work we started in ‘63”, as Colia Clark, SNCC (Student Non-Violent Coordinating Committee, pictured above) veteran and panelist called for in her closing remarks.

Open to all, but mainly attended by the youth who’ve taken the streets week after week demanding justice for Eric Garner, Akai Gurley, and the dozens of black and brown youth murdered daily by the police, the day’s workshops served to bring a broader context to the work of these protesters. Facilitators covered the true history of the police, strategies for movement building, made connections with Israel’s military occupation of Palestine, and also ran direct action trainings.

The conference culminated in a four person evening plenary, a multi-generational panel with all active women organizers moderated by CUNY Professor Johanna Fernandez. The panel provided a broad assessment of where the movement stands and where it is heading. They stressed the importance of building lasting organizations as key to continuing the movement’s momentum. They pointed to the need to articulate clear, specific demands to wrest power from the racist systems which oppress us all, although panelists stopped shy of calling out the capitalist class as the perpetrators of this violence, which we know disproportionately targets poor people of color.

Following the rousing remarks of the panelists, activists broke off into various groups organized around different boroughs (Brooklyn, Staten Island, Queens), issues (gentrification, LGBTSTGNC, mental health), and topics (direct actions, black youth organizing, community safety). Organizers hoped to jumpstart a new phase of the movement through this networking session, and lay the groundwork for thinking beyond just this moment of public outcry and frustration.

While the shootings of the two police officers in Brooklyn on December 20th stalled the movement in NYC somewhat, the call for racial justice kept developing in different areas around the country. Labor unions’ support of #BlackLivesMatter in California has been crucial in continuing the fight on the West Coast. Philadelphia led the way in building a coalition across various community, faith, and activist groups, including 15 Now, to call for an end to police violence, a $15/hr min. wage and a union, and fully funded schools. Socialist Alternative member Toya Chester was able to use Philly’s MLK DARE Rally as a concrete example of labor, workers, and activists successfully joining forces to make 3 concise demands at one of The Gathering’s workshops on strategy.

In NYC, activity seems to have peaked around December. A multi-racial, multi-generational mass action like the Millions March has yet to be replicated, though a smaller core of activists continued protesting through the winter, and we saw more activity around #ReclaimMLK Day.  The movement is still trying to find its footing, its pace and no unions have publicly supported the protesters, yet. There is still a lot of work to be done in creating a true united front among the various groups working to end mass incarceration and the NYPD’s racist policing practices, along with workers centers, unions, minimum wage activists, and socialists fighting to assert that black life and work matters. After Friday night’s panel, though, amid the many seasoned and new activists who were drawn to come out for a discussion on the state of affairs in NYC, an energetic spirit seemed to rise up into the air. People are ready to organize and take action.

The panelists’ high level of consciousness, their calls for organizational power and clear demands, calling for fundamentally transforming policing, calling for a reconstitution of the United States, probably had the widest reach it’s ever had as 300 activists sat in the same church MLK first spoke out against the Vietnam War 48 years ago. That in itself shows progress, but within the audience, a mixed consciousness still exists.

There is confusion about what the role of demands are and what those demands should be. One of the most resounding contributions from the audience was asked by a man wanting to know what our response should be when the corporate and political elite who run this city meet our placards, chants, and list of a demands with a callous “or else, what?”

Already there’s a growing sense that to truly fulfill the promises of the civil rights era for black liberation, to truly eradicate the poverty and violence inflicted on black and brown people by the corporate-controlled state, we must engage in the struggles of all people oppressed under capitalism. During marches we call out “Justice, if we don’t get it/Shut it down, shut it down” and “The whole damn system is guilty as hell”, and everyone intuitively knows these to be true.

It simply hasn’t been stated explicitly by many of the leaders of these marches that capitalism is our common enemy. Until that’s made entirely clear, we cannot begin to shape our demands properly, we cannot begin to identify that the tactics and demands we use to regain power for the 99% must be economic – actions like boycotts, work strikes, and rent strikes. We will only start to see the fruits of “The Gathering” in the coming months as NYC starts to thaw. Socialist Alternative NYC will continue to build and support #BlackLivesMatter when possible. We will point to the historical lessons from past struggles, which teach us that when we unite under the banner of the working class, we can stand up, fight back, and win.