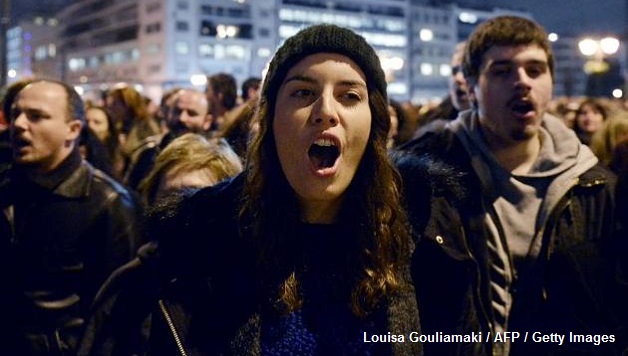 On the evening of 11 February, 100,000 people demonstrated in central Athens in support of the Syriza government’s stance in negotiations with the Trioka and EU leaders. Tens of thousands also took to streets of Salonika and other Greek cities. In polls, three out of four Greeks support the government’s position which is seen as standing up to the Troika. This shows the huge potential, if linked to a clear pro-worker, socialist programme, for the mass mobilisation, from below, of workers and youth to resist the Troika, organised democratically in the workplaces, communities, schools and colleges etc.

The German government, along with some austerity-making governments, like Portugal and Spain, have, so far, taken a hard-line towards Greece’s demands, which poses the spectre of a ‘Grexit’ (Greek exit) from the euro-zone.

In an article posted on Xekinima’s website on 10 February, Andros Payiatsos looks at the options facing both sides in the dispute and the role of the working class in seeking a solution to Greece’s ongoing crisis.

It is now clear, even amongst those with the greatest illusions in the EU, that Greece’s clash with the EU will be very hard. Merkel and the clique that runs the EU are not willing to accept the cancellation of the memoranda policies that they have imposed over the past years.

At the time of writing, all possibilities are open. It is possible for a compromise to be found between the Greek government and the EU directorate and for Greece to remain in the euro zone. Syriza has already backed down on a series of issues in relation to its initial declarations but the EU leaders demand more and threaten that otherwise Greece will be forced to abandon the euro and go for a national currency.

This attitude of Merkel and co. is something that the Syriza leadership should have predicted and prepared for. On the contrary, it wrongly estimated that it could have “negotiations” through which it could convince the European directorate with “logical” arguments. Based on this approach, the Syriza leadership argued and repeatedly reassured the Greek people there was no chance of a “Grexit”! This was a serious mistake, because it leaves the Greek working class unprepared for such developments. But there is, however, time to fix this mistake.

What is important, now, is to draw conclusions, from the recent experiences, for the future. And these are very simple and very clear:

The Greek working people have entered the battle and nothing can stop them from claiming back their livelihoods, which the Memoranda have deprived them of… nothing but one thing: an about-turn by Syriza! The mass of the Greek workers are worried –and they openly say so– that the Syriza government may back down. And for this reason they were relieved to hear Alexis Tsipras’s speech in parliament last Sunday, 8 February, on the Programmatic Declarations of the new government, in which he emphasised that Syriza will not back down on any of its promises (despite the fact that on a number of issues Tsipras had watered down Syria’s pre-election promises).

Answer Blackmail: Go for a Referendum or New Elections!

So what should Syriza do if the Troika puts a knife at the throat of the new government and demand “submission or Grexit”? Syriza should without any hesitation appeal to the “popular verdict”. This should occur either by means of a referendum or with new elections (if a political crisis results due to EU blackmails) in which Syriza should put the question, squarely, in front of the Greek working people: Keep the euro and the memoranda or go for a national currency and pro-workers’ policies.

If Syriza goes ahead with a such a bold counter offensive, then the Troikians, inside and outside Greece, will get an earth shattering reply, suffering such a crashing defeat that they had never dreamt of in their worst nightmares!

But having said this, we need to add the following: exiting the euro, on its own, will not solve the problems of the crisis of Greek capitalism. The re-introduction of a national currency must by necessity be combined with bold socialist policies: like capital controls, state monopoly of foreign trade and democratic public ownership of the big corporations and banks – and a class internationalist appeal to the workers of the rest of Europe. Only in this way will a national currency work as a tool of recovery for the economy and to the benefit of the working people of Greece. As Xekinima explained numerous times in articles and statements in its paper and on its website, it is not the currency that causes the crisis but the internal logic of the capitalist system, though, of course, the currency does define, to a significant extent, the precise characteristics that the economic crisis takes.

The leadership of Syriza is unfortunately very far from this kind of thinking. It continues to believe that it can come to an agreement and a compromise with the European directorate, with the perspective of “a different” EU, which is more sensitive to the needs of the weaker, more “humanist”, more “social”, etc.

The social dynamics, however, the class struggle that is entering a new phase, the struggles of the working class and of the social movements, can radically change the agenda! It won’t be the first time!