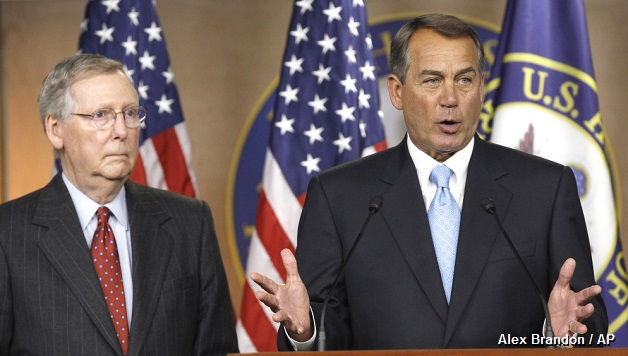 Time to Build a Working-Class Resistance

Republicans in Washington are making plans to push through their right-wing pro-business agenda, following their capture of the Senate last November. Tony Wilsdon reviews what this will mean for working people in the coming months.

It should be no surprise that Republicans have boldly announced plans to attack on the environment, immigrants, and health care while also pushing for tax cuts for the rich and big business. However, their ability to implement these changes will mainly rely on how well Democrats and President Obama hold the line.

The main problem for Republicans is that there is no broad support for their agenda. They did not campaign on this agenda, instead centering their campaign on ramping up fear against multiple foreign threats, including Ebola, ISIS terrorists, and immigrants crossing the border. Blame for these exaggerated problems was placed on the doorstep of Obama. Republicans were elected because of disappointment with Obama, resulting in many Democratic Party and progressive voters choosing to stay home on Election Day.

The most immediate plans are to defund Homeland Security to prevent Obama funding his proposal to grant temporary residence rights to millions of immigrants. Already the Keystone XL pipeline has passed the House and Senate and will await a promised veto from Obama. They also plan to challenge EPA policies to protect the environment in the courts. Next on the list is to challenge aspects of Obama’s health care program by seeking to use the courts to rule the expansions of Medicare as unconstitutional.

Part of this legislative agenda is designed to offer red meat to their right-wing base to keep them on board. Yet if they manage to push either of these through, it will be unpopular with voters and weaken Republicans’ ability to win further gains in 2016.

Republicans have been living in a bubble of opposition for the last few years, happily spouting right-wing rhetoric. They have offered no alternatives and spent their time blaming Obama for every ill in the world. Now they will need to face the reality of actually governing; yet their core policies are only popular with a right-wing minority of society. Implementation of these policies is likely to bring tens of thousands and millions into the streets.

The Reality of Bipartisan Agreements Both parties fear the voters. They look to distract them and deflect anger. A majority of the public wants an alternative political party. In order to pass more unpopular policies, a new round of bipartisan talks has begun in order to implement further parts of the corporate agenda behind the backs of ordinary people. Bipartisan policies usually only benefit one class in society: the richest 1% and big business. Bipartisan politics mean that neither party has to take responsibility. They can screw ordinary working people without taking the direct blame. It happened when Bush won support from Democrats to pass the bank bailouts of 2008. Bush’s earlier tax cuts for the rich and the passing of the Homeland Security Act only happened with Democratic Party cover and support.

One main item where there is clear bipartisan agreement is passing the Trans-Pacific Partnership (TPP), a further attack on our democratic ability to control the actions of major corporations, under the guise of a trade agreement. There is general agreement by leaders of both parties to pass a tax cut for big business, although the details are still to be ironed out.

For a Working-Class Alternative

Only a massive expression of public anger, with movements in the streets, can prevent this agenda going through. Only by publicly exposing the corporate nature of the policies can they be defeated. Social movement organizations, labor unions, and the left need to run independent candidates who can expose the corporate agenda. These campaigns can become a pole of attraction for workers and young people looking for a working-class alternative to these capitalist policies. Such campaigns can lay down the roots for the creation of a new political party of the working class, which can bring the millions into politics to fight the interests of the elite 1%.

What we need are pro-working-class, socialist policies, like a massive green jobs program, a nationwide $15 minimum wage, guaranteed paid vacation for all workers, demilitarization of the police, free college education, and cancellation of student debt. This should be funded by slashing the military budget, major tax increases on the very rich, and public ownership of the major banks and corporations, with decision-making over the use of these assets placed in the hands of elected representatives of our communities and the working class.

After the Midterms: Do the Democrats Offer a Real Alternative?

It is becoming clearer since the election of a Republican-dominated Congress last November that President Obama has decided to take a series of populist steps to help better position the Democratic Party for the 2016 elections, as well as to refurbish his legacy. Millions of progressives have been disillusioned by six years of policies that have served the interests of Wall Street, including the trillion dollar bank bailout, massive surveillance of the population, and minimalist measures to address police brutality, to name just a few.

The new measures include the executive order lifting the threat of deportation for approximately five million undocumented immigrants in the U.S., making a deal with China to cut greenhouse gases, and normalizing diplomatic relations with Cuba. Obama has sought to take these steps by invoking executive power and avoiding congressional votes that he would surely lose. Now Obama is calling to make community college free for the first two years and for middle-class tax cuts to be funded by higher taxes on the very wealthy. These steps require legislation and are highly unlikely to go anywhere in Congress at the moment.

Socialists will support any forward steps, while also spelling out the severe limitations of the measures Obama has enacted and is proposing. Taking the example of the executive order on deportations, there is no disputing that the move is a welcome relief from the danger of deportations that tear families apart. However, it comes just one year after Obama broke U.S. deportation records by imprisoning and forcing out 440,000 people – and the steps are not an amnesty, not a way to citizenship, and not permanent, all of which Socialist Alternative backs.

The Democrats sometimes pose as friends of labor, women, and people of color to appeal to the interests of the middle and working classes and keep them inside the two-party system. Nevertheless, it is their friends on Wall Street and in big corporations who determine major policy.

A critical example of how Democrats support corporations over workers was the $1.1 trillion budget deal passed in December 2014. First, at the behest of Wall Street’s biggest banks, Democrats helped repeal one of the signature provisions of the 2010 Dodd-Frank financial reform act. As a result, American taxpayers will once again underwrite high-risk credit default swaps and derivatives trades that are helping Wall Street billionaires grow richer and richer. The NY Times revealed that 70 of the 85 lines of the bill were cribbed from model legislation drafted by Citigroup – a fact that was apparently no problem for the 57 House Democrats who voted in favor of more deregulation.

Second, the White House supported a business-led attack on pensions that shredded 40 years of retirement income rights for workers. This radical provision, added to the budget bill without ever being debated in Congress on its own merits, permits the cutting of pensions for current retirees across the country. According to the Pension Rights Center, around 10 million ordinary Americans could see their pensions cut by an average of 10 to 30%.

The budget deal offers a stark counterpoint to any suggestion that Democrats represent a real alternative for working people. Increasing numbers believe there needs to be a new political party. Only independent left politics, forged through social struggle, can provide a real alternative the two parties of capitalism.