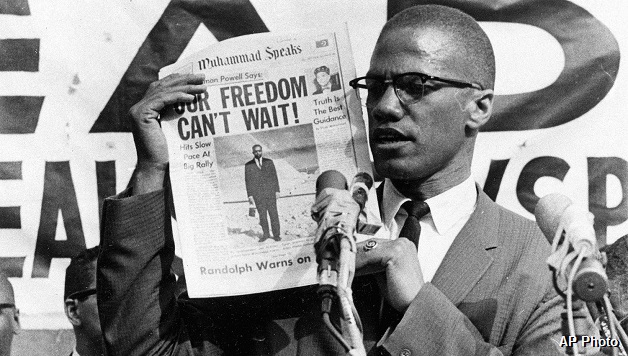 The 50th Anniversary of His Assassination

“And in my opinion, the young generation of whites, blacks, browns, whatever else there is, you’re living at a time of extremism, a time of revolution, a time when there’s got to be a change. People in power have misused it, and now there has to be a change and a better world has to be built, and the only way it’s going to be built – is with extreme methods. And I, for one, will join in with anyone – I don’t care what color you are – as long as you want to change this miserable condition that exists on this earth.”

I am part of a generation of young African Americans that is beginning to rediscover Malcolm X. Let it not be mistaken; we know who he was and what he stood for. We wear T-shirts with his face and quote his most famous words. But my generation did not hear him speak on television. His death is not something we can remember. I, myself, only recently heard his actual voice for the first time. But my generation is becoming radicalized through the same struggles that Malcolm fought in his day because so many of the conditions have not changed. We are searching for ideas and a way forward. Unfortunately, not only for him, but for the entire movement, he was murdered in cold blood on February 21, 1965, while preaching just that: a way forward.

The Autobiography of Malcolm X is a great resource for understanding the development of Malcolm, and everyone should read his amazing story. Here, I can only touch on a few highlights.

Malcolm’s ideas and philosophies went through many changes in his short life. Radical thinking was something that was introduced to Malcolm at a very young age. He would go with his father to hear different political activists. When Malcolm was six, his father was killed by white supremacists. Malcolm’s mother wound up in a mental hospital when he was 13, and his life continued downhill. After he wound up in prison at age 20, his siblings, who were greatly influenced by people like Marcus Garvey, introduced him to the Nation of Islam (NOI), which was a tiny black nationalist sect before he joined.

The Nation of Islam

Although Malcolm ultimately left the Nation, being part of the organization was crucial for his development as a leader. While in prison, he truly began to question the world and took the opportunity to explore different ideas. He developed these ideas further in forums such as a debate society, to give one example. But the NOI also gave him something to fight for and gave him hope for a better world, which cannot be understated when analyzing the development of a leader as powerful as Malcolm. For it is this hope that drove him to be so passionate.

Malcolm X spent ten years of his adult life in the Nation of Islam as a prominent preacher who played a key role in bringing its membership up to 100,000 by the early ‘60s. He had devout faith in the group’s leader, Elijah Muhammad, for many years. But over the course of time, Malcolm began to find it harder and harder to agree with the decisions made by the leader. In 1962, a fight broke out in a parking lot in southern California between some police and members of Mosque Number 27. One member of the mosque – like so many young black men today – held up his hands in the “don’t shoot” manner to surrender to the police – and was shot dead. Malcolm tried to organize the NOI to go and demand justice for the dead brother, but Muhammad would not allow it. Malcolm went anyway and participated with civil rights organizations in a rally, educating people about how this was not about religion but rather about skin color.

As time passed, Malcolm grew in the spotlight. Yet while Muhammad was living an increasingly lavish lifestyle, Malcolm was living paycheck to paycheck. Muhammad’s jealousy of Malcolm’s abilities and charisma created tension between the two men. When Malcolm would go to speak, Muhammad would order him to only speak about things that he had previously heard the leader say, which were never political.

But it wasn’t until after Malcolm was suspended from preaching for publicly stating that the assassination of JFK was a “result of the climate of hate” that he decided to leave the Nation of Islam and start his own organization. Malcolm rightfully called out JFK – and the whole Democratic Party – for blockading Cuba and waging war in Vietnam in the name of “freedom” and “democracy” while not “correcting injustices against Negroes” here in the U.S. Malcolm could not keep silent any longer about what was so obvious to him, namely that black people would not be liberated without a fight, a political fight, an economic fight. There needed to be an end to what he called the “political oppression, economic exploitation, and social degradation” of black people.

“Being Black Is Not a Crime” is a slogan we have heard recently from the current anti-police brutality protests. But in Malcolm’s youth, being black was not even something to be proud of in the eyes of the majority. Instilling racial pride was one of Malcolm’s greatest contributions to the movement that is still alive today. He advised people to “think black,” giving black workers a sense of identity, an identity to be proud of and to feel strength in.

What was happening in America during this time was not happening in isolation. Malcolm learned this through his travels in Africa and the Middle East, in countries that were colonized by Western powers. He saw the misery of colonization and the fight in these countries that the black people, men and women alike, were putting up to gain independence. Malcolm sums it up quite eloquently in one television interview by saying, “Now to make it appear that the Congolese themselves are criminals, are brutes, because they’re reacting to these injustices that they’ve been victimized by, is again ducking the question.” The point is that when black people will no longer stand for injustices placed upon them, they are criticized for fighting back.

Malcolm X saw the need to unite with his black brothers and sisters in Africa. But then he went to Algeria, a country in the north of Africa. The people there did not have black skin, and this was something that Malcolm struggled with. He knew the oppressor to be white and the oppressed to be black, but in Northern Africa that wasn’t quite the case. This was crucial for Malcolm’s understanding of who the enemy truly was. He classified this time as “an era of revolution.” He finally develops the analysis that, “It is incorrect to classify the revolt of the Negro as simply a racial conflict of black against white, or as a purely American problem. Rather, we are today seeing a global rebellion of the oppressed against the oppressor, the exploited against the exploiter.”

We are currently seeing the same evolution in the movement for racial equality that Malcolm went through. But why reinvent the wheel? Malcolm learned through his travels around the world that it was not about black and white, Muslim and Christian, man and woman. It was about capitalism and what the ruling class would do to remain in control over the economy and the world’s resources.

Internationalism was a key concept that helped Malcolm draw anti-capitalist conclusions. Malcolm sought to learn from the anti-colonial struggle by drawing international attention to the plight of African Americans.
He saw the need for independent political action by African Americans. He completely rejected the idea that the Democratic Party had anything to offer black people, stating, “With these choices, I felt the American black man only had to choose which one to be eaten by, the ’liberal’ fox or the ’conservative’ wolf – because both of them would eat him.” He also began to see the need for economic action by poor people, such as rent strikes, but he did not see clearly the strategic role of black workers in industrial production and the power they could wield alongside white workers in fighting for a better life.

The Search for A Way Forward

Malcolm’s greatest strengths were his fearless search for answers, his honesty about his own failings, and his willingness to learn from experience. Toward the end of his life, he had discussions with the Socialist Workers Party, a Trotskyist organization, though he himself never became a Marxist. Unfortunately, despite a proud history, the SWP had capitulated to black nationalism, calling for a separate black revolutionary organization and implicitly accepting that it was a “white organization.”

As noted earlier, Malcolm had acknowledged that it was not just an issue of black and white but of oppressed and oppressor. This points toward the need for a racially integrated workers’ party to lead the fight for system change. Working people have the social power to change society. They can bring the production, distribution, and sale of goods and services to a halt. Black people still face segregation and special oppression, but racial division has set the entire working class back and, at the end of the day, only truly benefits the bosses. Black people cannot be liberated through a struggle on their own, especially considering that they are less than 20% of the U.S. population. Workers need to unite together no matter what color they are, as the ruling class will always try to find a way to divide us.

Malcolm X was clearly on the correct path. His humility may not be so apparent when listening to him speak, for he had a grand confidence that is to be admired. But we see in his efforts to adapt his ideology as he gained a wider experience that humility is key in a great leader. And so my generation must continue where Malcolm ended. We do not need more black capitalists to liberate black people. Obama has proven that quite well. My generation has the ability to learn from Malcolm with an advanced outlook on race. We shall not mourn the death of Malcolm X but rather commemorate him and continue fighting for an equal society and a socialist world.