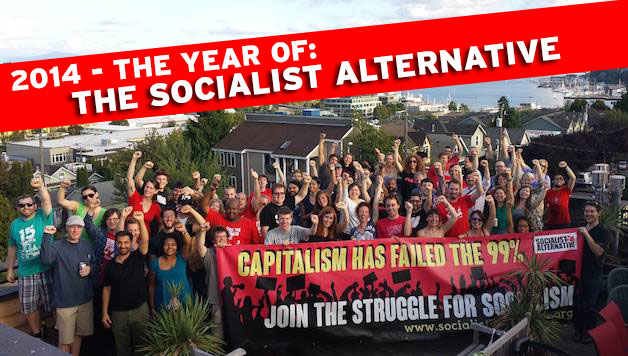 Underneath the gross commodification that profit-driven corporations have marketed at us in every imaginable way, the holiday season is still a time of communities coming together, of giving, and of valuing others.  It is a time of reflection on the year and of looking ahead to what’s to come. Socialist Alternative has had a great year of helping fuel struggles of working people all over the country.

Support us to continue this struggle and build on it:  Buy a subscription to our paper Socialist Alternative for yourself and a loved one. Give them the gift of a news source with a socialist perspective, and fund our work at the same time. With your help we can fuel more movements like 15 Now, run more candidates like Kshama Sawant, and help push for a fundamental change in the interest of working class people.

Click here to go to the Winter Appeal subscription page

2014 – The Year of: Igniting Sparks of Action & Resistance in the US It began with SeaTac voters, and spread to a movement in Seattle that was built on the election of Socialist Alternative member Kshama Sawant. After June 2nd 2014, when Seattle became the first major city to pass a $15/hour minimum wage law, the movement exploded nationwide. Victories in LA, Chicago, Massachusetts came swiftly, 15 Now spread to over 20 cities & states across the country, and on November 4th voters in four states passed minimum wage increases. 2014 was the year when the public debate on 15 was won. 2015 will be the year to snowball it across the country and bring millions of workers up to a basic standard of living. 2014 was the year of a spark in the struggle for climate action, with the biggest march for climate action that this country has seen since Earth Day in 1970. For the first time, this march united environmentalists and unions, standing up against the big business argument that we have to choose between having jobs and environmental protections. 2014 was the year of a spark in struggle against racism, as the brave community in Ferguson took up the murder of Mike Brown as a rallying cry against the rampant police killings of people of color across the country. This bold spark has the potential to ignite a new civil right’s movement against police racism, mass incarceration, and the economic racism that has continued to dominate policies. As Malcolm X said, “You can’t have capitalism without racism,” and the youth in Ferguson is standing up against that fact. 2014 was the year of a spark in the fight for immigrants’ rights the movements for equal rights and justice won a partial victory with Obama announcing to end the threat of deportations for almost 5 million undocumented immigrants. However, more than half of them are still left out and seeking justice. Republicans are threatening to not even allow Obama´s first step. This might in itself trigger more anger and protests.

Democrats are trying to present themselves as defenders of immigrant rights, but under Obama a record number of deportations were executed. Six years of his presidency were wasted, including the time when he had majorities in both houses. The movements pushed ahead. That´s what got the ball rolling. That’s what we need to build on. A new mass force is needed to challenge racist Republicans and timid, pro-big business Democrats. 2014 was the year of a spark in the the fight for women’s rights. #YesAllWomen movement to #YesMeansYes and #CarryTheWeight were three twitter hashtags that showed the anger and potential for future movements against the oppression, violence and harassment against women. These movements have shifted the dialogue about rape and exposed the administrations at some of the most powerful universities for prioritizing the image of the university above justice for students who were victims of rape. 2014 was a year of fight-back, and at each turn Socialist Alternative was there organizing, supporting, & reporting.

Our newspaper and website are maintained as an independent socialist analysis of events around the country and world-wide as they unfold. Mainstream media tells the story from the perspective of the ruling 1%.

Being organizers for workers´ interest and self-organization we tell the story from the side of the workers, young people, people of color, women and LGTBQ activists; we contextualize the current issue historically and politically;  and we connect the issue with all others that fight the economic and social ills that are the repercussions of capitalist exploitation.  There is a lot of hope that 2015 will be an even bigger year.

We are proud to now release ‘Socialist Alternative’ monthly. We made this jump so that we could keep our news more current on the struggles breaking out all over during this time of capitalist collapse and worker fight-back.  To keep this up, we need your help. If you find our analysis valuable, support us by buying a subscription for yourself and a loved one. Show them that a better world is possible, and that people all over the world are fighting for it with coherent, effective socialist strategies. 2015 will be a bright year.