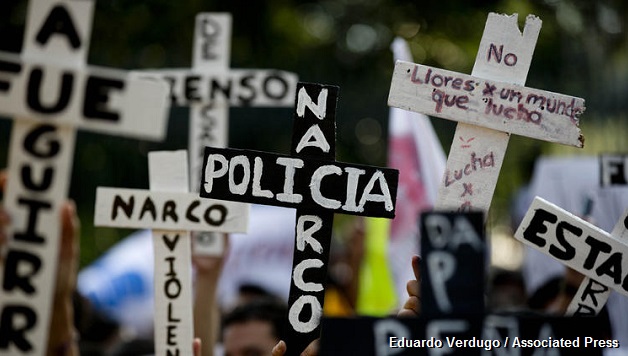 On October 9, hundreds of thousands of people took to the streets of Mexico to demand justice for the 43 missing students from the Normal Rural School in Ayotzinapa. These marches stem from the unearthing of numerous clandestine mass graves close to the place where the student teachers were last seen being corralled onto buses by the police.

The students were stopped while traveling to the city of Iguala to protest against harmful neoliberal education reform legislation. This has evoked memories of the infamous 1968 Tlatelolco Massacre, in which police and military forces murdered hundreds of students and civilians. Students at numerous major Mexican universities declared strikes and international days of action throughout October and November. However, an examination of various policies and institutions is imperative to completely understand the situation.

Since 1971, the United States has been fighting its “war on drugs” with policies centered on pushing drug-trafficking-related violence into Mexico and Central America. In December of 2006, the Mexican government began fighting its own “war on drugs” with more than $3 billion dollars from the United States government. Simultaneously, drug cartels have been fighting each other for control of territory and markets. Numerous corrupt government officials, the army, and the police – the forces who are supposed to be fighting against cartels – are actually shown to have a collaborative relationship with traffickers.

Ostensibly, the drug war was meant to make Mexico safer, as traffickers and violent crime pose an obvious threat to the country’s well-being. However, the body count from this alleged “war on drugs” from 2006 to 2014 is more than 100,000 dead, at least three-quarters of whom are under the age of 25. In addition, more than 400,000 Mexicans have been displaced from their homes as a result of the drug war violence around them.

Alongside these events, a movement against Mexican President Enrique Peña Nieto and Mexico’s three major parties has emerged from growing discontent over the deplorable continuation of this “war on drugs” and the lack of proper response to the abduction of the 43 students. Subsequent to the disappearance of these students, Mexico’s National Palace was set ablaze by protesters carrying torches. These protests began as a seemingly spontaneous outcry against the “disappearance” of the 43 students, but they have developed into a broader movement of young people and the working class resisting an overwhelming manifestation of fear, violence, and corruption in Mexico.

Throughout the world, frustration with the lamentable consequences of capitalism has reached a boiling point. From South Africa to Mexico, young people have been at the forefront of these struggles. The fight against worsening economic inequality and political repression is extending beyond borders and reaching an entire generation of youth with uncertain, dwindling futures. These movements that challenge the current social, political, and economic establishment have also served as an inspiration to working people across the globe.

The massive protests have already demonstrated the potential strength of these growing movements in Mexico. To most efficiently direct this growing discontent, a cogent challenge to the current three-party political establishment is necessary. It’s obvious that the current establishment is devoted to preserving Mexico’s capitalist system. Through a movement of workers and young people organizing around a socialist alternative, a real challenge to the exploitative system of capitalism is possible.