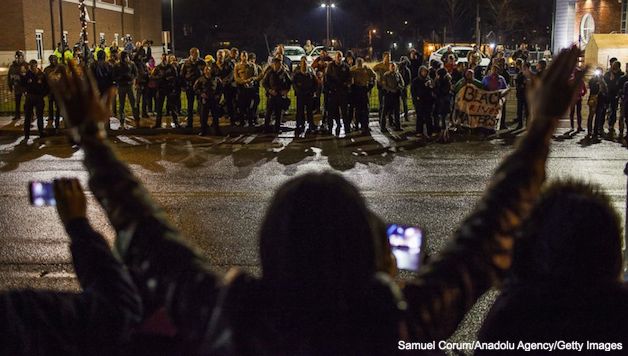 The prospect of a new Black freedom movement has been raised through nearly three months of heroic protests by the youth of Ferguson. Like the murder of Emmett Till in 1955, which helped spark the Civil Rights Movement, Mike Brown’s murder symbolizes the systematic violence and oppression faced by millions of people of color in our society.

The whole process of top-down investigation by police and use of secretive grand juries has failed to provide justice. Socialist Alternative calls for an independent investigation by organizations in the black community and the wider working class, such as unions. We call for a democratically elected civilian review board with real powers to deal with police brutality. This board should have the power to hire and fire officers and launch independent investigations.

The only way to gain justice is to build the most powerful possible movement in the streets. This should include a massive campaign of protests and actions – including, where possible, strike action. Time and again, we have seen courts forced to make decisions in cases based on strong opinions from the public, rather than purely on the merits of the case. This is to prevent the courts being discredited before the public.

Workers have organized mass solidarity campaigns in legal cases like those of Big Bill Haywood in 1907, Huey Newton in 1968, and Mumia Abu-Jamal in 1999. These cases were widely seen as representing broader political processes in society, much like the grand jury’s role in Mike Brown’s murder. In each, the ruling class backed off because it was afraid of a social explosion.

New black organizations, other social justice organizations, and labor unions should organize similarly around Mike Brown’s murder, mobilizing millions of workers into mass demonstrations and utilizing workers’ unique power to interfere with the capitalist system. In a small example of what is possible, black and white workers at UPS in Minneapolis took wildcat action in solidarity with Ferguson through “Hands Up, Don’t Ship,” refusing to ship riot control gear to the Missouri State Police (Labor Notes, 8/26/2014).

Such actions conjure up the old slogan “An injury to one is an injury to all,” first by recognizing that the same militarized police used in Ferguson will also be used to repress strikes and social movements like Occupy Wall Street. At the same time, these actions offer ways for white workers to act in solidarity with their black and brown brothers and sisters, cutting across the corporate media’s fear-mongering of a coming “race war.”

Increased state repression in the U.S. is directly connected to the fact that we live in one of the most economically unequal societies in human history. It’s even more stark if you break it down by race and gender. As of 2010, the average white family had six times the total assets – house, cars, savings, retirement – as black and Latino families (NY Times, 4/28/2013). Women make 77 cents to every man’s dollar. The gap is even greater for African-American and Latina women, with African-American women earning 64 cents and Latina women earning 56 cents for every dollar earned by a Caucasian man (NWLC, 10/13/14).

Revolutionaries have long pointed out the connections between racist state repression and class society. In 1966, at a time when many radical African-American activists were embracing socialism, the Black Panther Party’s Ten-Point Program featured demands for 100% employment, fully funded social programs, and ending the Vietnam War in addition to demands for an end to police brutality and the retrial of all black prisoners by “People From Their Black Communities.” We need a similar approach today. Movements like the fight for a $15 an hour minimum wage offer a tool to organize millions of workers into action. Such a movement, with links to the broader labor movement, would offer a far stronger vehicle to challenge police brutality and mass incarceration than liberal nonprofits and Democratic Party politicians.

On this basis, a new black freedom movement could be constructed which would have the potential to reach out to an entire generation of young people of color who have been totally disenfranchised by U.S. capitalism. At the same time, it could build bridges to the broad anger of millions of working class-people against corporate CEOs and Wall Street, and to the massive disillusionment with a broken political system. Starting with building momentum in the streets, workplaces, and universities, such a movement should run independent candidates tasked with bringing these demands into the political arena, using the mass attention elections get as a megaphone to advance the movement.

To build toward a new mass liberation movement:

However, to defeat police violence, racism, and poverty, we need to address their root causes in this system itself: capitalism. This whole system, here and around the world, is based on the exploitation and oppression of ordinary people. This is how capitalism functions: Workers are impoverished, oppressed, and terrorized while wealth is concentrated at the top. St. Louis and Ferguson provide the touchstone for a new and vibrant movement to cleanse the crimes of capitalism and white supremacy from present and future generations. The need for a system change is on the agenda now! A socialist world is possible.