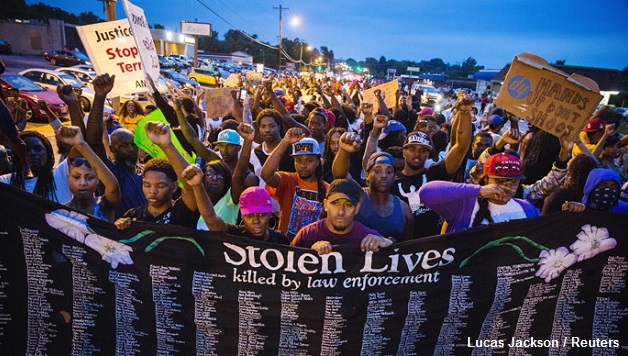 The Grand Jury failure to indict Darren Wilson was rigged. The entire criminal justice system is a racist set-up to criminalize black youth. Over a million are in prisons for non-violent offenses while the real criminals on Wall Street never see the inside of a prison cell. Four times a week, a black man is killed by the cops or racist murderers like George Zimmerman, Trayvon Martin’s killer. Enough is enough! These demonstrations need to spark a new Black Freedom Coalition for justice, jobs, education and an end to racist policing.

We need to continue the movement against racist police violence to demand not only an indictment of Darren Wilson but also an open investigation into the Ferguson police department by community groups and unions. The criminal injustice system is connected to economic racism inherent in US capitalism. Black workers are often the last hired and first fired while schools and housing are under-funded in neighborhoods of color.

The youth leading the movement in Ferguson have rejected the millionaire pol­itician leaders of the Democratic Party like Jesse Jackson and Al Sharpton. They have built on their own strength, courage and determination to continue their struggle despite being vilified and told to end their protests. In this context, they’ve started new grassroots coalitions of ordinary work­ing people and youth. We need to follow this example and connect it to a strategy and program to win victories to improve our lives.

We need national days of action with protests in every city to build a movement out of the current anger. These actions should demand community control of the police through democratically-elected civilian review boards with the power of hiring and firing. We should demand a $15 an hour minimum wage as well as guaran­teed quality jobs, health care, education, and housing.

The unions, the NAACP and commu­nity organizations could mobilize millions of motivated people for protests like this throughout the country. This could be the beginnings of a new, youthful coali­tion to challenge racism and poverty. These coalitions could be run demo­cratically, refuse to take money from the super-rich and campaign in schools, workplaces and communities to build protests against police violence and eco­nomic injustice.

Obama and the Democrats aren’t delivering real change for working people, young people or the black community. We need to get organized with clear demands to win.