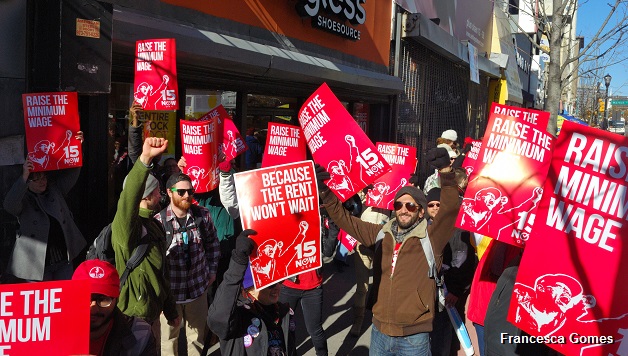 Below is the text of a leaflet 15 Now is circulating across the country on Black Friday.

Across the country low-wage workers are rising up and demanding $15 Now! A national week of action starting on Black Friday will see the most widespread protests of low-wage workers in decades. The stage is set for a major escalation next year, and 15 Now will be launching a big “$15 in 2015” campaign to push the movement forward.

Our movement gained tremendous momentum in the past year as major cities like Seattle and San Francisco raised the minimum wage for all workers to $15, and SeaTac and L.A. increased wages to $15 for workers at airport related-industries and hotels.

Bolstered by the recent victories, Wal-Mart workers stepped up their wage demand from $12 to $15, signing up workers in over 2,200 stores, and backing up that demand with a sit-down strike in California. Blocked by corporate corruption in Washington DC, 17 states and 10 cities have raised the minimum wage over the last two years.

Outrage over growing income inequality and increased awareness of the precarious situation faced by low-wage workers has shifted public opinion dramatically. In Washington State, a majority now support increasing the state’s minimum wage to $15. Nationwide, support to raise the federal minimum wage (currently $7.25) has grown to 71%.

But big business is fighting back. In New York, Chicago, Los Angeles and other major cities, business organizations are working overtime to protect their profits and pressure the politicians they finance to block, water down, or delay minimum wage hikes.

To kick off “$15 in 2015”, we’re calling for major national days of action next spring, on March 15th and April 15th. All signs point toward April 2015 being the next major flashpoint, with SEIU and others gearing up for widespread strike action just as a host of local minimum wage campaigns are heating up.

With mass popular support for $15, the potential exists for a wave of victories across the country next year. But it will take building a mass movement embracing all workers and activists prepared to fight back against corporate power and the political establishment.

The victory for $15 in Seattle was only possible because 15 Now, a grassroots, democratic organization, systematically organized the community to light a fire under business-friendly elected officials at every opportunity. We rejected the failed political strategy of relying on backroom deals with the Democratic Party and pushed a wide coalition of labor and community groups to adopt a bold fighting strategy.

The mass movement strategy and democratic approach of 15 Now are needed to build the solidarity and fighting capacity of working people, and to overcome the resistance of big business. With your help, 15 Now will be at the heart of this growing national fight, pushing the movement forward with the proven politics and methods that won in Seattle.

Become a sustainer of 15 Now. Join your local chapter.