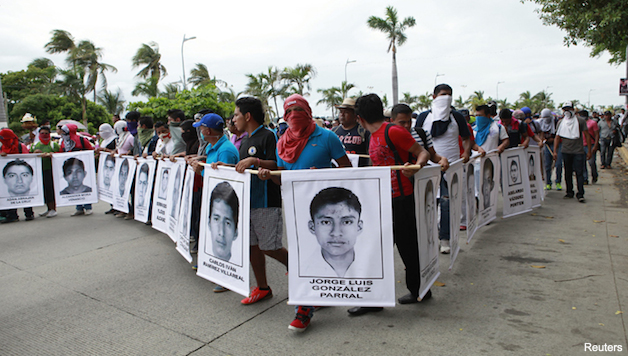 When it comes to student protests, the recent movement in Hong Kong has claimed the international headlines. Receiving scant media attention has been the wave of protests in Mexico, following the “disappearances” of 43 student teachers in the southern state of Guerrero.

It is a sordid tale of drug traffickers, corrupt local politicians and police involving an attack on a group of militant and politicised youth belonging to the “normales rurales” – rural teacher training schools. The details of the events are still murky but it would appear that on the night of 26 September, in the small town of Iguala in southern Guerrero, there was a clash between students and local police. The students (or “normalistas” as they are known) had gone to Iguala in order to “occupy” a number of buses — obtaining permission of their drivers, the students claim — to be used for their transportation to Mexico City for the commemoration of the infamous 1968 Massacre of Tlatelolco (student killings that preceded the Mexico City Olympics). This practice was fairly common for the normalistas. One news source commented on the horrific events of 26 September:

“The lack of funds in their boarding school makes these and similar kinds of direct action — like the ‘hijacking’ of trucks carrying milk and other food products — necessary. Once the students are back in their school, they normally return the buses or trucks to their respective owners. This time around, the police blocked the buses and opened fire on them, killing six people (three students and three unfortunate citizens who happened to be in nearby cars and buses), while another 43 students simply… disappeared. The students were last seen being boarded on police trucks and were never to return again. Some days later, a number of mass graves were discovered nearby, in which a number of bodies that had previously been tortured and most probably burned alive (by the narco-criminals, it seems) were also found.” (Leonidas Oikonomakis http://roarmag.org/2014/10/missing-students-mexico-normalistas/)

Since then, the leader of the main narco criminal gang has been arrested, as well as 36 police officers. The congress in the state of Guerrero has impeached the mayor who is also being sought by police on organised crime charges along with his police chief. Both the mayor and his wife are on the run.

The killings/disappearances sparked outrage in Guerrero and across Mexico, particularly in the universities. This past Wednesday, 22 October, saw the biggest student protest in the capital in decades, estimated at 100,000 – all the more impressive for a mid-week event. Memories of the 1968 movement have been evoked. One newspaper reported it : “Torches, candles, trumpets, but, above all, a stunning silence as tens of thousands of young people in various contingents from all the cardinal points of Mexico City flowed like a human River for four hours from el Angel de la Independencía on Reform Avenue, to the Zócalo, with a single cry: ‘Alive they took them away, alive we want them back’.”(http://www.proceso.com.mx/?p=385578)

The demand was for the resignation of the head of State Enrique Peña Nieto as they denounced the three main parties (PRI, PAN and PRD) for colluding with the “narcopoder” (narcopower). The protests have spread across Mexico into some of the biggest the nation has seen in years, mobilizing thousands of university and high school students while also gaining support from unions, vigilante groups and many others.

The government of Peña Nieto has come under fire for failing to find the students after four weeks. The people of Mexico have endured years of a United States-backed ‘drugs war’ claiming more than 70,000 lives and leaving thousands of others missing. But the latest horror of corrupt police and narco gunmen killing teens has sent shock waves throughout the country.

NBC news reported: “‘It is not possible that the government shows off its advanced technology and then can’t use it to trace and rescue the 43 students,’ one father, who introduced himself as Rafael, told the crowd in Mexico City. ‘They must find our sons or face the consequences.’

The NBC also reported that “on Thursday, students also blocked major roads across the capital, snarling up traffic. While the capital city’s protests have been peaceful, demonstrators in Guerrero state have smashed and burned several buildings, including the Iguala mayor’s offices, and have occupied town halls and radio stations. Two different armed cartel-fighting vigilante groups that operate in Guerrero have supported the protests, while a local leftist guerrilla group has also promised to avenge the students.

“As well as criticizing Peña Nieto, protesters are furious with the leftist Democratic Revolution Party or PRD, which runs Guerrero state and the town of Iguala. Demonstrators along with many senators and deputies called for the resignation of Guerrero Gov. Angel Aguirre, and on Thursday night he finally said he was throwing in the towel.

“The marches have coincided with other student protests adding to the pressure on the president. Students at Mexico’s technical colleges have been taking over campuses in protest against a change in their courses that would downgrade them to technicians instead of engineers. They see this as a ploy to pay them less as the president looks for a bigger role for foreign companies in Mexico’s energy and other sectors. Meanwhile, students in Guanajuato state marched on Thursday after a classmate was murdered. Witnesses claim he had been taken by police officers although a state prosecutor denied this.

“There is a lot of anger that has been building up over different issues,” said school teacher Ricardo Rivas, marching in Mexico City. “Once the anger is unleashed it could shake this country up. These protests could become much bigger.” (http://www.nbcnews.com/news/latino/protests-mexico-over-missing-students-are-biggest-years-n233051)