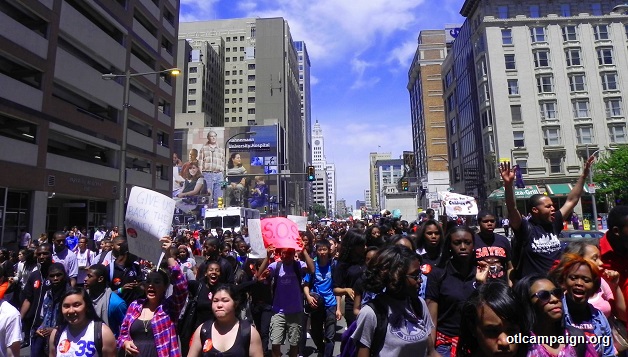 In a barely legal,17-minute meeting on Monday, October 6, the School Reform Commission voted unanimously to cancel the Philadelphia Federation of Teachers’ (PFT) contract. The latest volley in the on-going campaign to eliminate quality public education in Philadelphia, this vote allows the School District to begin charging teachers and staff for health benefits, cease payments into the union’s health and welfare fund and cancel health benefits for retirees!

Salaries will remain unchanged, for now, but the school district had been demanding wage cuts of up to 13% in its 21 months of stalled negotiations with the union. Provisions in the cancelled contract mandating maximum class size, teacher prep time, minimum ratios for nurses, librarians and counselors, as well as those which establish basic conditions in the schools like clean restrooms and working drinking fountains are now, likewise, vulnerable to the whim of the SRC.

Citing fiscal mismanagement and poor test scores, Pennsylvania “took over” the Philadelphia School District in 2001 and replaced the School Board with the School Reform Commission, a majority of whose members were to be appointed by the governor and a minority by the city’s mayor. State courts refused to act on the union’s challenges to the powers granted to the SRC at that time, since no harm had yet been done. Previous legislation had authorized the state to revoke the teaching certificates of Philadelphia teachers, and only Philadelphia teachers, who strike.

Teachers’ contributions to their health benefits will net a modest $44 million for the district this year. This “savings” must be understood in the context of an overall $2.8 billion district budget and a $291 million deficit. Mayor Michael Nutter cited the health benefits as the only possible source of additional funding, declaring, “There’s no more money to be had from anywhere.” City Democrats and state Republicans applaud the school district’s multi-million dollar payouts to charter school management companies and Wall Street’s biggest banks, like its $63 million payment to Wells Fargo for the privilege of restructuring its above-market interest rates after the 2008 collapse. On the other side of the balance sheet, the corporate politicians refuse to legislate new sources of education funding by increasing taxes, or even eliminating existing tax breaks, subsidies and abatements, for wealthy corporations, developers and individuals.

Unfortunately, the PFT leadership’s response to the massive state cuts in education funding, school closures, the transfer of students and resources to charter schools, layoffs and the deaths of two students directly related to the elimination of school nurses was inadequate. After years of setbacks, it is of course difficult to organize a renewal of struggle. However, it was precisely the lack of resistance that emboldened the SRC to take this latest step. But the desire to fight back among teachers and students is clearly there. Students at several schools walked out in support of their teachers, but much more can be done and much bolder action can be taken.

An Attack on All Working People

The union now has the chance to organize broad constituent and community support. Given the attacks on education all across the US, a serious fight back will find a big echo of support and solidarity all across the nation, as the Chicago Teachers´ Union strike in 2012 showed. The PFT should take up the call to replace the SRC with a locally-elected school board made up of educators, students, parents and community members. The demand that the contract must be restored can be broadened through the mobilization into a call that all cuts to education be restored. Students and parents will engage with the teachers as allies and build a mass movement for a fully funded education system that serves our interests, if the union offers a real strategy to push back.

Voiding the teachers’ contract is an attack on all city workers and unionized workers generally. Philadelphia has one of the highest rates of union density of any big city in the country. Reports from a meeting of the Philadelphia Central Labor Council indicate that a number of union officials were in favor of calling a general strike in the city. But PFT President, Jerry Jordan, argued that the union should first pursue “all legal remedies” and, in the end, the council decided to focus on defeating Republicans in November.

This “strategy” has led the labor movement straight into the blind alley it finds itself trapped in today. While Republicans clearly oppose both public education and unions, the Democrats try to say enough to get working class votes without actually doing anything that could jeopardize their corporate funding. The first instinct of the outraged union officials was right: there should be a one-day general strike of city workers in Philadelphia to call the question, “Whose side are you on?” Such an action in defense of teachers and public education would have mass support from working class people and would demonstrate that workers will fight back against austerity and union busting. The PFT could also call for a national day of demonstrations and protests to defend education and teachers´ rights – and will find a great response to such a call to action.

Workers and students in Philadelphia can open a new chapter in building a real movement of the 99% which can challenge the policies and the politicians who serve the interests of the 1%. Socialist Alternative in Philadelphia is supporting the teachers and students and part of the struggle to fight for fully funded and high-quality education for all.